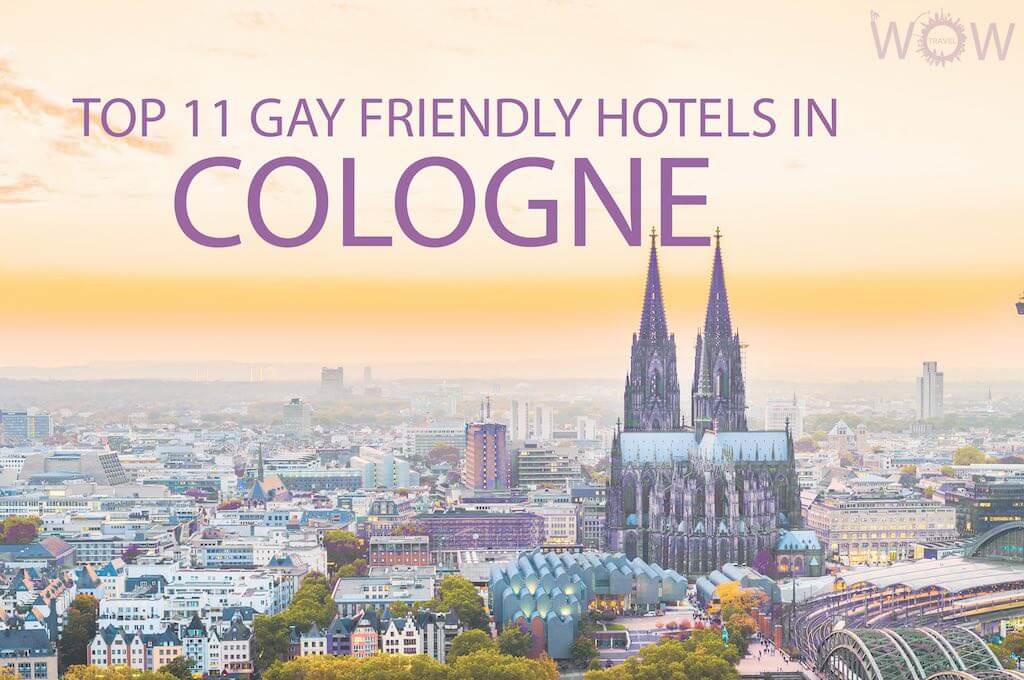 The gay scene in Berlin might be more dynamic and bigger, but Cologne will give you a warm, fuzzy-something, familiar feeling. Famous as Germany’s ‘other’ gay capital, the city has become a popular tourist destination. It is due to this fact, as well as the city’s cosmopolitan and accepting attitude that there are many gay hotels in Cologne spread across its many neighborhoods. Rudolfplatz is one of the main gay districts in Cologne. The neighborhood is mostly known for those gay bars in Cologne which cater to a hipper, trendier, and younger crowd. The stretch between Alter Markt and Heumarkt, on the other hand, is fetish-friendly and sees a more mature crowd.

Cologne also houses one of the biggest gay communities in the country. Interestingly, Cologne Pride happens to be the biggest LGBTQ event in Germany! With a host of festivals like Gay Games, Fetish Pride, and Carnival and Bear Pride, it’s no wonder that Cologne is a greatly popular destination with LGBTQ travelers.

Clearly, Cologne makes for an interesting alternate gay destination in Germany. If you’re planning to visit this city, here’s our handy list of the top 11 gay-friendly hotels in Cologne. This will certainly help you choose your base and make your gay-cation to this lovely city all the more fun.

No accommodation says ‘gay-friendly’ in Cologne better than Novum Hotel in Cologne’s Altstadt. The hotel lies right next to a posse of gay theatres and sex shops with pretty risque displays. The Gentle Bears gay bar is right next door attracting bears, cubs, and their admirers. Other popular gay bars in Cologne, as well as its famous saunas, are within a two-street walking distance of the Novum Hotel.

Located right in the heart of the Old Quarter of Cologne, the hotel is perfect for exploring Cologne’s beautiful sights such as the gorgeous Heumarkt Christmas Market or the Chocolate Museum. With small but clean rooms, the hotel is great value for money for those looking to explore Cologne’s sights and the gay scene on a budget.

One of the most popular gay hotels in Cologne known for its spectacular views is the Art’otel Cologne on the banks of the River Rhine. Culture lovers looking to explore Cologne will love Art’otel’s proximity to the Chocolate Museum, a three-minute walk away. What’s more, the hotel is within a 10-minute walk of the mature gay scene near Heumarkt. The hotel is also great to explore the fantastic medieval Altstadt – the historical center of the city.

Art’otel Cologne features modern-minimalistic and well-equipped rooms, where the corner rooms are the most spacious. The artsy hotel features a wonderful outdoor terrace and a great sauna with sweeping views of the city. During summer, take a walk along the Rhine right in front of the hotel.

Budget fun is central to the gay-friendly hostel of Die Wohngemeinschaft, which translates to “The Flat-sharing Community.” The 16-room hostel is located in the heart of Cologne’s Belgian Quarter right next to the verdant Hiroshima-Nagasaki Park. Sleeping out has never been more fun than at Die Wohngemeinschaft, which features themed rooms ranging from shiny Bollywood quads to sub-orbital spaceship rooms. The shared lounge and the cute terrace are fantastic places to meet fellow gay travelers. The hostel even has a kitschy cafe-bar and an entertainment stage with songs and poetry, making for a great gay communal vibe.

Die Wohngemeinschaft is on the fringes of the gay district of Cologne Rudolfplatz and its gay bars and saunas. Those looking for a young, hot crowd will appreciate the Phoenix Sauna right opposite the hostel. Some of the best gay bars in Cologne such as Exile and Ruhrpott are a five-minute walk away.

If exploring the sounds and sights of Cologne is also on your itinerary, Hotel Cristall in the heart of Cologne offers excellent value for money. The stylish Hotel Cristall lies just 10 minutes from the Cologne Cathedral, which also happens to be the meeting point for this fantastic 1.5-hour tour of Cologne’s best historic and modern sites. Most of Cologne’s other stunning sites like Ludwig Museum and Kreuzblume are also 10 minutes away, as is the River Rhine. Cologne’s gay district of Heumarkt isn’t far from Hotel Cristall either. It’s a 15-minute walk away.

Rooms at Hotel Cristall are comfortable to crash in after a day of exploration and a night of partying. Comfy beds and spacious showers, along with a fantastic breakfast, are a great way to begin an amazing day in Cologne.

The gay-friendly Steigenberger is located right in the middle of all the action of Rudolfplatz. The hotel is one of the favorite hotels in Cologne with LGBTQ travelers to the city. Two streets down lie some of the best gay bars in Cologne, including the cozily sensational Ex-Corner, an institution among gay bars in Cologne. The mature gay scene at Heumarkt is a 20-minute walk.

Travelers can choose from a host of spacious rooms at the Steigenberger Hotel Köln. Some of them feature stunningly beautiful views of the city. The hotel even has a steam room and a sauna, so make sure that you make the best use of it! The Rudolfplatz transit station is right behind the hotel, making Cologne’s amazing attractions and sights easily accessible.

Gays traveling to Cologne on a budget will fall in love with the gay-friendly vibe at the classic German hostel DJH Jugendherberge Köln-Riehl. Nestled right next to the River Rhine near the Botanical Gardens in Cologne, the “youth hostel” nevertheless attracts travelers of all ages. A blend of budget amenities, great services, and an open-minded approach is what makes this hostel so popular with gay travelers. Private and dorm rooms are both available, along with a breakfast that is great for meeting fellow travelers.

The youth hostel makes for a great base for exploring some offbeat attractions in Cologne like the Flora and Botanical Gardens and the historic stone Fort X. While the gay scene at Heumarkt isn’t close, its a mere 20-minute light rail ride and walk away.

Perfectly located in the city center of Cologne is the gay-friendly Lindner Hotel City Plaza. Six floors featuring specific themes by a talented street artist greet you. Meanwhile, spacious rooms and a whole lot of amenities make for a comfortable stay. What’s more, the hotel even offers a city tour of Cologne.

The hotel’s location close to the Friesenplatz subway station makes the attractions and sights of Cologne extremely accessible. However, the spectacular Cologne Catherdal is just a 15-minute walk. What’s more, the gay scenes at Rodlfplatz and Heumarkt are a short walk away. In fact, the gay sauna, Badehaus Babylon is just three minutes from the hotel. So, the Lindner is perfect for gays who’re looking for a city center base for their exploration of the gay-friendly Cologne.

Grandeur comes to Cologne in the form of the Excelsior, one of the most luxurious gay hotels in Cologne. Located right next to Cologne Central Station, the deluxe hotel is perfect for gay travelers looking to splurge on their stay. The classic hotel is all about gold accents, marble floors, and dark wood furniture, combined with impeccable service. The hotel even features in-room massages and treatments, so booking one for you and your partner is a great idea. The steam room and sauna feel absolutely indulging after a long day of exploring the city. The rooms with spacious bathrooms are the epitome of luxury, ensuring you never want to leave this place.

If you do end up leaving the luxury of the Excelsior to explore the city, the fabulous Cologne Cathedral, the largest in Northern Europe, is right next door. We’d highly recommend this wonderful 3-hour tour of Cologne Old Town’s sights, including a thrilling hour-long cruise on the Rhine!

A 15-minute walk up north of the hotel lies Kattewinkel, a fabulously cute LGBT bar catering to the ladies. Heumarkt’s mature gay scene is a 15-minute walk south. Of particular interest to older men will be the late-night gay cruising bar, Deck 5 and the senior-admiring gay bar, My Lord.

If cruising is on your mind while you vacation in Cologne, stay at the gay-friendly Motel One Köln-Waidmarkt in the heart of the gay district of Cologne, Heumarkt. Mote One is a stone’s throw from the fabulous posse of gay bars in Heumarkt, including the crazy Station 2B, and 10 minutes from the gay saunas at Rudolfplatz. There’s no doubt that the hotel is the gay cruising traveler’s dream stay in Cologne.

While the rooms are slightly on the smaller side, they are modern and fully-equipped. The value-for-money, modern designed hotel also features a great complimentary breakfast and a super-friendly staff. What’s more, it’s just 15 minutes to the Cologne Cathedral.

If you’re looking for a great gay-friendly hotel in the gay district of Cologne Heumarkt that is value-for-money and full of frills, the Maritim Hotel fits the bill perfectly. Touted as one of the most friendly gay hotels in Cologne, the Maritim features wonderfully modern rooms, some even with views of the stunning Cologne Cathedral. The frill-full hotel even features a superb sauna and a huge indoor swimming pool perfect for languorous swims and lounging around.

The River Rhine is right next to the hotel, and a walk along it is a great way to begin the day. Explore some of the most famous sights of Cologne like museums, churches, and gardens, barely 10 minutes from the hotel. End your day at the vibrant gay bars in Heumarkt.

Located right by the River Rhine in the heart of the gay district of Cologne Heumarkt is the value-for-money, gay-friendly Hotel Lyskirchen. The hotel is particularly preferred by the 30-year-plus set due to the many gay bars which lie in the vicinity. Modern rooms with amenities such as a gym, heated indoor pool, and a sauna make the Hotel Lyskirchen an amazing, value-for-money stay in the heart of Cologne. The other gay neighborhood of Cologne Rudolfplatz is a short ride away via the Severinstrasse underground station, which is a 10-minute walk.

With the Cologne Cathedral and museums also a short walk away, Hotel Lyskirchen makes for a great gay-friendly stay. in Cologne.

Get Some Culture in Cologne: