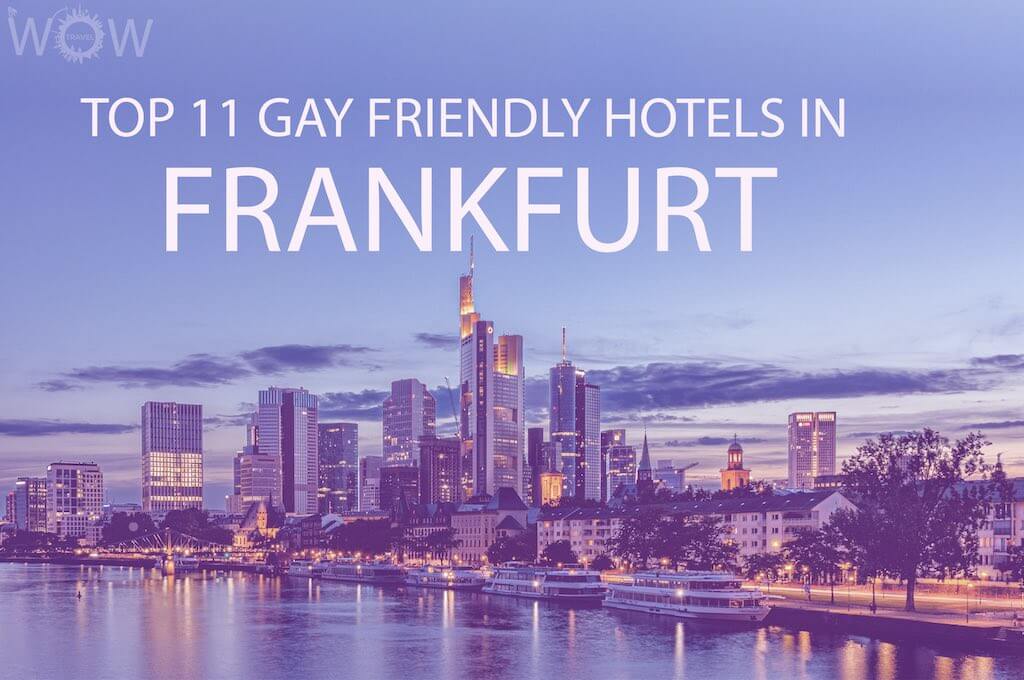 Often referred to as ‘Mainhattan,’ Frankfurt, with its swish skyscrapers and swanky buildings, is distinct from other German cities. This multicultural and tolerant city is often overlooked because of its financial powerhouse image. However, the city has a big queer presence and therefore, there is no shortage of gay accommodation in Frankfurt. Although you won’t find any exclusively gay hotels in Frankfurt, there are plenty of options to choose from.

Frankfurt’s queer neighborhood in the downtown Innenstadt area is commonly referred to as the Bermuda Triangle. The reason being that many disappear into the happening nightspots here and don’t reappear for a long time. Frankfurt Pride is when this phenomenon is more evident with parties, dive pubs and fetish dens entrapping wide-eyed suspects.

If you step away from the gay area and the fabulous nightlife for a while, you’ll find that Frankfurt has much to offer. World-class museums, historic architecture and a quaint medieval town are waiting to be explored. There are plenty of shopping options too. Notably, shopaholics might want to explore Wertheim Village, a luxury retail outlet on the outskirts of the city.

This vibrant hotel chain with properties in Berlin, Hamburg, and other European cities is extremely popular with the gay community. Notable for its funky interiors, quirky decor, and youthful vibe, the 25Hours Hotel The Trip is one of the most popular gay hotels in Frankfurt. Its location right in the heart of Frankfurt just near the main station puts you close to all the action. There are plenty of gay bars and clubs in the vicinity to keep your nights busy. Cultural sights are also within walking distance from here.

The fun and vibrant interior of the hotel enclosed within a modern glass and brick building has 76 stylish rooms categorized according to size. Rooms start from S and go up to XL. In keeping with the 25Hours theme, rooms decorated in neutral colors have bright walls and hangings.

Guests can also look forward to a good Middle-Eastern meal at the on-site restaurant or chill out at the rooftop terrace with a hip bar. After all, this hotel is also one of the 11 Best Hotels in Frankfurt.
Check Rates & Book Now

If you’re looking for gay accommodation in Frankfurt close to the gay area, then The Pure is a great choice. Bars and cafes abound in the area and cultural sites are also within easy reach. You could take a private tour with a local to learn more about the attractions in the area if you’re interested.

Housed in a building that was once a textile factory, the hotel is clean and comfortable. In keeping with its name, the interior of the hotel is all white. However, rather than being trendy, this choice of color throughout the hotel tends to create more of a sterile atmosphere. A good thing about this choice of color is that it accentuates the natural light which streams in from large windows. Comfortable guest rooms equipped with modern amenities have spacious ensuite bathrooms.
Check Rates & Book Now

In tune with Europe’s grand old-fashioned five pearl hotels, is the Steigenberger Frankfurter Hof with its impressive facade and interiors. Shopaholics will love the location of this upmarket gay accommodation in Frankfurt which is hardly three-minutes away from Goethestraße, the city’s major shopping street. Other iconic attractions such as Goethehaus and the Museum for Modern Art ar an easy walking distance from here. Besides these attractions, you won’t fall short of Frankfurt’s nightlife either as the hotel is in the midst of many bars and restaurants.

Built in 1876, the hotel continuously strives to blend the traditional with the modern. Guest rooms received an upgrade into more sophisticated modern units after a renovation in 2016, and are now spacious and elegantly designed.

Several good dining options at the hotel provide good options for guests who prefer to stay in. Although Francais, the Michelin-starred restaurant is the hotel’s standout feature, there are other good restaurants at the hotel too. Another key feature of the hotel is the huge spa and wellness area. The spa includes a solarium, a sauna, a small gym and also a private Day Spa Suite for couples.
Check Rates & Book Now

Luxury gay accommodation in Frankfurt doesn’t get better than the Rocco Forte Villa Kennedy. Renamed after President John F Kennedy’s visit in 1963, this refined five-star retreat offers the best of everything you would expect from a luxury hotel. Located on the Sachsenhausen side of the river, the hotel is just a five-minute walk away from the museum. Also within easy walking distance from the hotel are many gay bars and the popular Velvet club.

The interiors of this luxury villa are a beautiful fusion of classic and contemporary design, with rooms featuring restrained color schemes and high-end textiles. Even the lowest category Deluxe King rooms are spacious and elegantly designed. Newly designed suites named after icons, Jackie O, Audrey Hepburn, Marilyn Monroe, and Marlene Dietrich are quite popular with guests.

Villa Kennedy also offers guests an indoor pool, hot tub, steam bath, and sauna. To top it off they have a studio space for yoga, a spa, and a great restaurant.
Check Rates & Book Now

Between the Zeil shopping street and the financial district, you’ll find another popular gay accommodation in Frankfurt, the Moxy Frankfurt City Center. Its location puts you in close proximity to many gay bars and other nightlife options in the city. Like its counterpart in Chicago, and other cities in Europe, Asia, and North America, this Marriott property is hip and affordable.

Similar to its other properties, Moxy Frankfurt has an inclusive, fun, and youthful vibe. Vibrant wall murals, a neon play area with foosball, a bar and a modern lounge with a fireplace add to the lure of staying here. Tastefully decorated guest rooms are comfortable and spacious with modern amenities.
Check Rates & Book Now

Less than a kilometer away from the Frankfurt Central Station and about 1.3 km (0.8 mi) from the historic old town, is the stylish Motel One Frankfurt-Messe. Like its contemporary in Hamburg, the hotel is one of the more affordable gay hotels in Frankfurt.

The interiors of the hotel, especially the lobby, are reflective of the financial district in which the Motel One stands. Bright stylish guest rooms decorated with contemporary furnishings feature a desk, ensuite modern bathroom, and other amenities.
Check Rates & Book Now

Another centrally located upscale gay hotel in Frankfurt is the Jumeirah Frankfurt. The all-glass 25-floor building is impressive, to say the least, with cutting edge luxury combined with comfort.

It’s an ideal location for shopaholics as it shares space with MyZeil shopping mall. There are plenty of other shopping places around the hotel. Cultural attractions such as Goethe House and the Old Opera House are within an easy walking distance from the hotel, as are many gay bars.

Spacious rooms and suites have an open plan layout with floor to ceiling windows offering beautiful views of the city. Soothing earthy colors enhanced by boldly colorful paintings and timber floors make the rooms chic yet comfortable. Although the hotel does not have a pool, guests can use the pool at the Fitness First center next door for free. The Jumeirah, however, has a great spa, sauna, and wellness center.
Check Rates & Book Now

With a central location and excellent pool and spa, it’s no wonder that the Hilton City Center is one of the more popular gay hotels in Frankfurt. The hotel’s location puts you within striking distance of many cultural sites and gay bars.

Elegant and stylish furnishings add to the contemporary aesthetic of the hotel. Large windows and a glass-paneled roof atrium flood the ground floor with natural light. Guest rooms are also comfortable with subtle blue and grey color schemes adding a touch of class. Modern conveniences such as minibars, kettles, televisions, and safes add to the comfort of the rooms. The hotel’s Park Restaurant, located on the ground floor, serves modern German and international dishes.
Check Rates & Book Now

The Grand Hotel Dream hotel is popular gay hotel in Frankfurt because of its central location. Within easy walking distance of the Zeil shopping street, Konstablerwache U/S Bahn Station, and many other attractions, the hotel is a good place to base yourself.

Guests can choose between various categories of rooms from basic singles to a larger family room. The classically designed rooms are clean and equipped with modern amenities. Other facilities at this gay accommodation in Frankfurt include complimentary breakfast and an on-site restaurant. The hotel also has a spa, sauna, and jacuzzi which guests can use for an extra fee.
Check Rates & Book Now

For someone looking for affordable gay accommodation in Frankfurt, the Favored Hotel Scala is a great choice. Its central location puts you in close proximity to many of the city’s main attractions. Zeil shopping promenade, Old Opera, Romer, and Frankfurt’s gay scene are all just a few steps away from the hotel. The Metropol gay sauna and the gay cruise club, The Stall, are also a few minutes away.

Soundproofed guest rooms at the hotel are bright and comfortable. Standard amenities include a minibar, telephone, desk, free wifi, complimentary toiletries, and satellite TV. The hotel does not have any additional facilities like a restaurant or fitness center.
Check Rates & Book Now

There is no dearth of luxurious gay hotels in Frankfurt City Center and Fleming’s Selection Hotel is just another one of them. A stone’s throw from the Alte Oper (the old opera house) and Zeil, this five-star property promises exclusive comfort and incomparable service.

A subtle retro-chic elegance envelops rooms that are designed for comfort. The cozy ambiance is enhanced by materials in warm earthy colors and mellow lights. Large windows allow ample natural light into the rooms. Guests can also enjoy sweeping views of the city from the summer terrace complete with a bar and restaurant.
Check Rates & Book Now

Get Some Culture in Frankfurt: