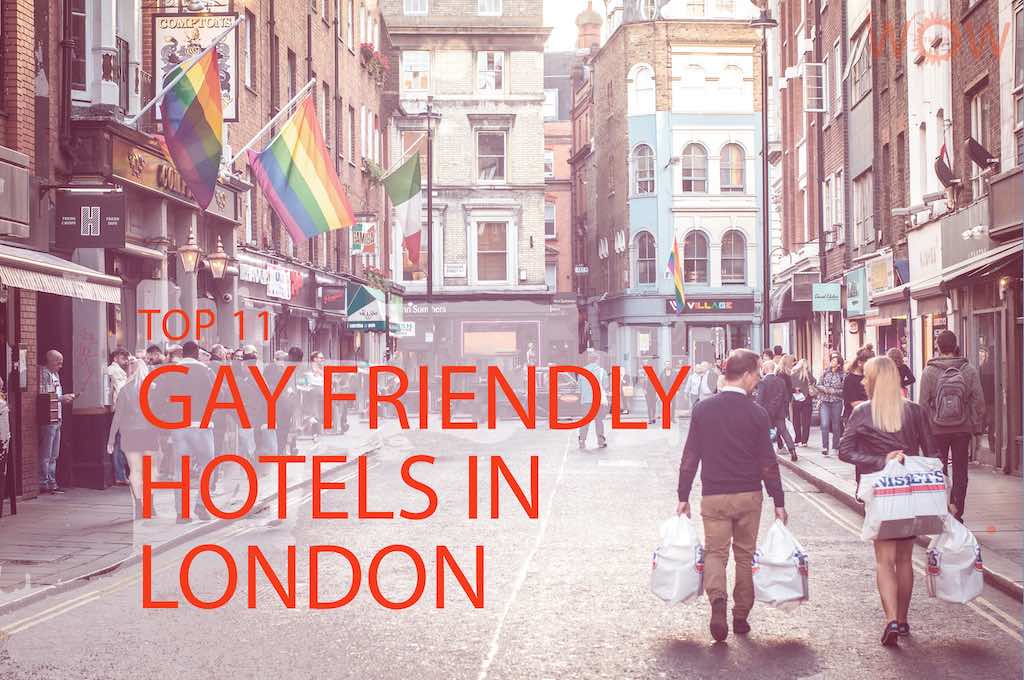 Jolly old’ London is one of the world’s most gay-friendly cities and has been a haven for the members of the LGBT community for more than a hundred years. In the last two decades, the city has become extremely gay-friendly, with LGBT clubs and bars popping up in tourist areas. London has been home to some of the world’s most famous LGBT events and home to one of the biggest pride parades in the world. So, if you’re looking for places to stay while visiting this gorgeous English city, check out these top gay hotels in London. These are not only affordable but feature super-friendly LGBT vibes:

In the heart of Soho, one of the most gay-friendly areas in London lies the Z Hotel. A cluster of 12 gorgeous Georgian townhouses cleverly and beautifully transform into this boutique, designer hotel. Featuring modern, compact, ensuite single/double rooms, the Z hotel is one of the more popular gay hotels in London for its affordability. However, the most unbeatable aspect of Z Hotel is its location; all of Soho’s gay bars, cafes and restaurants are just a stone’s throw away, as is Chinatown.

In the “urban village” of Fitzrovia in central London, the charming bed and breakfast FitzBB is one of the most vintage gay hotels in London you’ll find. Housed in an 18th-century townhouse, the gorgeous B&B is just what you need when you wake up to one of London’s crisp mornings – a homey atmosphere, quirky, full-of-character decor, solitude, and a wonderful communal continental breakfast. What’s better is that the FitzBB in the heart of West End is close to all of central London’s amazing neighborhoods – Regent’s Park, Covent Garden and, of course, Soho. P.S.: The B&B only has three rooms, so if you’re looking to stay here, book earlier on.

The inimitable Vauxhall ranks second on the list of gay-friendly areas in London. It is also home to many gay hotels in London, one of the most popular of them being the luxurious Park Plaza Riverbank. The hotel not only offers luxuriously comfortable modern rooms, but there’s also a highly recommended restaurant serving a great breakfast buffet and delicious meals. There are also spectacular views of the River Thames from the upper floor rooms. If you’re indulging in a night out at the pulsating clubs of Gravity at Fire or A:M at Protocol, or wish to luxuriate at Chariots Vauxhall gay sauna, which are all just close by, then the Park Plaza Riverbank is for you.

Interconnected, historic 18th-century Georgian houses transform into the quirky, intimate Hazlitt’s, one of the most eclectic and yet terrific gay-friendly hotels in London. Nestled in a quiet corner just off Soho Square, Hazlitt’s is stylish, innately English, eclectic, and sophisticated to the last stone. Patronized by media, film, and stage people across the world, Hazlitt’s boasts of spacious rooms complete with modern comforts, antiques, and pictures. If that wasn’t enough, then all of Soho’s gay bars are right around the corner.

If you’re a bibliophile planning to explore the famous LGBTQ-friendly bookstore Gay’s the Word, then one of the best LGBT hotels in London is George’s Hotel in Russel Square. Housed in a handsome Georgian townhouse with a typically Victorian vibe, George Hotel features rooms with a royal deep purple theme all done up aesthetically with pine furniture. The hotel is nestled right next to a small park with trees and is just a short walk away from Soho’s gay bars and the London underground.

The modern Premier Inn London Southwark is one of the top LGBT hotels in London if a central London location is what is important for you. This features modern, comfortable rooms and great views and also serves a delish complimentary breakfast every day. The Pulse club and the extremely popular Pleasuredome gay sauna are closeby, as are the Millennium Bridge, Tate Modern, and Southwark underground station. The gay-friendly neighborhoods of Vauxhall and Soho are 10-15 minutes away by bus/underground as well.

Amsterdam Hotel is one of the LGBT hotels in London with a loyal LGBTQ patronage. Located on the tranquil, tree-lined Earl’s Court Street in central London, this boutique-style OYO B&B is all about pastels – whether its the wallpaper, linens, or the furniture which lend it an unfussy, upscale ambiance. Amsterdam Hotel boasts of ensuite, modern rooms, some of which are serviced apartments, and tolerates late-night, considerate, and discreet visitors. Curl up with a cuppa on the chairs in the beautiful, verdant garden if you’re visiting London in the summer.

Environmentally-conscious LGBTQ travelers to London will love staying at Qbic hotel, which is walking distance from Tower Bridge as well as multiple tube stations. The hotel is built on the ‘Qbi’ pod principles and follows sustainable practices, such as recycling 90% of the waste it generates and water-saving technology in the bathrooms. With a wide range of breakfast options, an all-day menu, and gorgeous decor, Qbic hotel makes for a great ‘green’ stay in the heart of London.

Lying in the fashionable Clerkenwell neighborhood, the eclectic, gay-friendly Zetter Townhouse Marylebone features European interiors and royal flair. Featuring aspects of modern living, the interiors of the Zetter Townhouse are reminiscent of an English country home-cum-cocktail bar. Guests can choose from 24 ensuite rooms with rich, majestic interiors and furnishings in shades of russet, crimson, and navy. Overlooking the cobblestoned St. John’s Square, the Zetter Townhouse is walking distance from Hyde Park, Oxford Street, and the wonderful West End theatres.

If you’re seeking gay-friendly hotels in London with modern luxury, head to DoubleTree by Hilton, Westminster. With a fantastic location in London’s historic government center, the hotel is also close to the city’s popular, historic attractions such as Big Ben and Westminster Palace. Carpeted, contemporary guest rooms/suites feature blond-wood furniture and floor-to-ceiling windows with spectacular views of London on the higher floors. The hotel offers plush amenities such as a fitness center and lounges too.

Located in Camberwell, the whimsical boutique Church Street Hotel brings Mexico and Cuba to the streets of London. Featuring a Bohemian theme, the hotel rooms feature a cornucopia of Mexicana, including cinema posters and funky tiles from Guadalajara. The ensuite bathroom products are organic, as is the spread offered at breakfast. Clapham and Vauxhall are nearby, and the area itself is edgy and upcoming.