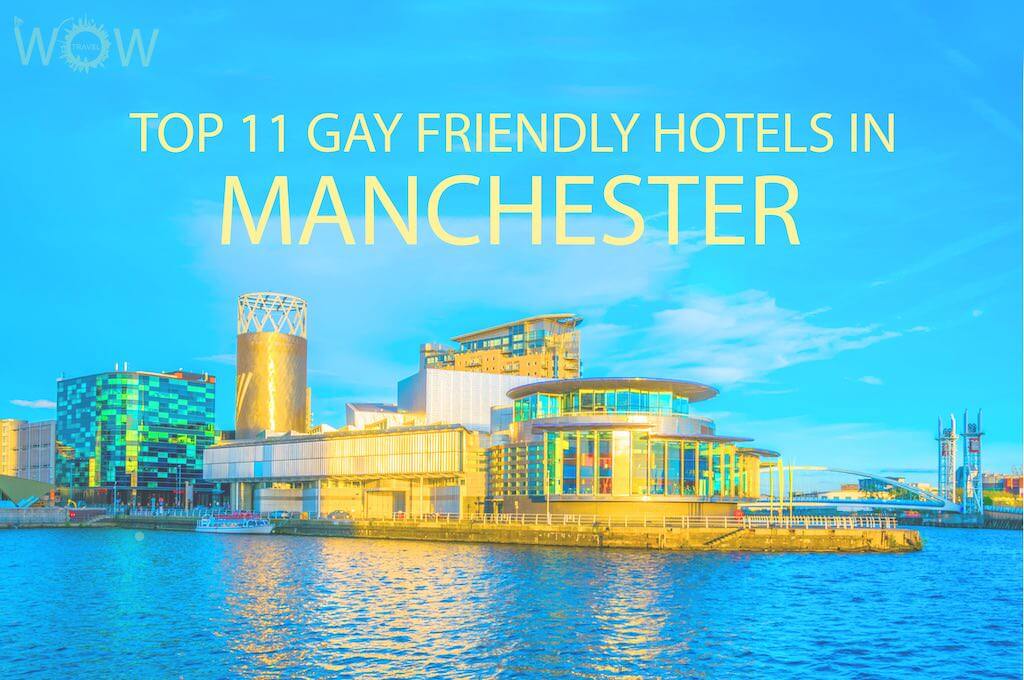 Manchester has the reputation of being one of the most gay-friendly cities in England. The city is famed for its football culture, but gay travelers know it for Canal Street, the heart of the Gay Village of Manchester. With Manchester being just two hours away from London, the LGBTQ population from the capital often comes to spend the weekend partying on Canal Street. The oldest, largest, and most flamboyant gay village in the UK is also home to most of the gay hotels in Manchester. In fact, hotels in the gay village of Manchester fill up quickly during weekends and during the fabulous Manchester Pride.

The gay scene of Manchester is far ahead when compared to those in the rest of the country. In this English city, it’s very common to see same-sex couples showing open affection in the city center. Manchester’s ‘gayborhood’ Canal Street was put on the map when it featured in the late ’90s British TV program “Queer as Folk.” Today, Canal Street is the nucleus of the four-day Manchester Pride. The city also hosts Sparkle, the UK’s national transgender celebration, as well as the Great British Bear Bash. In fact, there’s even an LGBT+ Heritage Trail marked with rainbow-flag paved stones highlighting Manchester’s LGBT history.

If you’re in Manchester to gay-party the night away, look no further than the Velvet Hotel located right in the middle of all the action on Canal Street. The sexy, gay-friendly Velvet Hotel is extremely popular due to its fantastic “discounted clubbing package” which includes a bottle of prosecco on arrival and late check-out. The party package is offered in the three Velvet King/Clubrooms on the first floor. However, if you fancy quiet nights, note that the noise from the club next door and bar below could make you uncomfortable. There’s no pool or gym either, however, its a trade-off for revelers looking to party and those who don’t mind not getting much shut-eye at night and sleep all day.

We personally love the Velvet Hotel since service is more personable when compared to the chain hotels, making it a great choice for both gay singles and couples. Rooms feature gorgeous murals and statement wallpapers. Actually, they make for a perfect ambiance for crashing after a night of partying. In fact, Manchester’s gay scene begins right next door at Via, one of the city’s oldest and busiest gay bars.

If you’re traveling in a group and prefer your own personal gay space in Gay Village, Manchester’s Canal Street, the stylish, modern Canal Street Apartments are perfect. Each apartment features two bedrooms, well-equipped kitchens, and living areas. While the place doesn’t have the usual amenities expected in a hotel, it’s the perfect retreat for having an after-party of your own. In fact, if you’re looking for some quality sex essentials, Clone Zone two streets down, offer a great selection.

Canal Street Apartments are bang in the middle of Manchester’s gay scene, including the sparkly G-A-Y featuring a younger crowd and awesome drink deals. If the gay bars of Manchester are a bit vanilla for you, try the fetish-central Eagle Manchester, where sexy masculine men and themed nights make cruising fun and exciting.

Five minutes from the Canal Street action lies the gay-friendly ABode Hotel, one of the best gay hotels for exploring both the Gay Village Manchester and the city’s tourist attractions. While the Gay Village and its gay scene is a four-minute walk, many of Manchester’s wonderful walking tours begin close to the hotel. We highly recommend this 2.5-hour afternoon walking tour. The pickup point is a mere 10-minute walk from the ABode Hotel. This comprehensive tour not only features the city’s best attractions but doesn’t clash with your evening of revelry either.

The ABode Hotel’s wonderfully spacious rooms also bring the convenience of your own bar and brasserie. There, live-music evenings are a great place to grab a pre-drink before heading out to the gay scene.

Are you looking for a splurge-worthy, luxurious gay-friendly stay close to Gay Village Manchester? The Midland Hotel is one of the best luxurious gay hotels in Manchester. An ornate red brick-terracotta exterior is a harbinger of what you’ll find on the inside. Rooms, while requiring some modernization, have rich and muted color schemes that vary according to the floors. Foodies are spoilt for choice with two restaurants for casual as well as fine-dining meals. However, its the spa that’s the highlight. The massage and treatment rooms, whirlpool tub, steam room, sauna, and a small relaxation pool are a great hideaway to spend some relaxing time with your partner.

Those looking for excitement outside the hotel needn’t go too far. Manchester’s Gay Village and gay bars are within a five-minute walk. If you’re still looking for afterparty fun, long after the clubs and bars close, Void is where you need to be. Be warned – if you’re there on the weekend, you may exit only the next morning when it shuts!

YHA Manchester is one of the best stays in Manchester for those looking for cheap accommodation, even though it’s a 20-minute walk to Gay Village Manchester. In fact, this is one of the very few good gay hotels in Manchester we’d recommend it if you’re looking for a dorm bed, especially due to its service and quality. Offering a variety of dorm rooms, the YHA hostel features a lounge and a communal kitchen great for whipping up meals and impressing cute fellow bedmates.

Gay Village’s offerings such as Cruz101, Manchester’s most popular gay club, are a 20-minute walk. If you prefer something smaller and more exclusive, head to New York New York. If you seek a quiet, older guy-frequented sauna, try Base, a 20-minute walk away on Sackville Street.

A stylish budget gay-friendly hotel right next to Manchester-Piccadilly train station is Motel One. The trendy hotel is just two streets behind Gay Village Manchester and its fabulous gay bars such as The Thompson Arms. In fact, most gay saunas and adult entertainment stores are within a two-street radius of Motel One. Thus, this gay-friendly hotel is absolutely perfect for every kind of budget gay traveler.

Rooms at the hip Motel One are utterly contemporary and comfortable. A buzzing bar downstairs is great for enjoying a drink before heading out for the evening. What’s more, plenty of the best things to do in Manchester lie within walking distance from the hotel.

Renowned as the “party place,” gay-friendly hotel Le Ville is literally surrounded by some of the best gay bars in Manchester. Located right in the heart of Gay Village, Le Ville is your basic, frill-free party-goer budget hotel. While the rooms are small and the noise from the street could be a bit distracting, the hotel almost always has walk-in bookings along with a bottle of wine and a free muffin. Plus, with its cheerful and playful ambiance, it’s right where you want to be if you plan to revel in Manchester’s gay scene.

If you have some time free after your revelries and wish to explore around, there are free walking tours of Manchester. These begin at the Alan Turing Memorial, a two-minute walk from Le Ville.

Although on the pricey side, gay travelers speak highly of the DoubleTree by Hilton. Perfectly located at the entrance to Canal Street., the rooms are luxurious. And, the hotel has a great modern gym, an outdoor terrace, and serves a fantastic huge spread for breakfast. The super-friendly staff is more than happy to offer suggestions for sightseeing and bar-hopping to gay travelers. If you’re still unsure, why not keep your first evening in Manchester free for this fantastic 3-hour tour of Manchester’s best gay bars? It’ll certainly help you decide where to go the next day!

If budget and proximity to the gay bars of Manchester on Canal Street suit your priorities, the New Union Hotel fits the bill perfectly. Located at the edge of Manchester’s Gay Village, New Union is within walking distance of some of the most fabulous gay bars in Manchester. In fact, the UK’s best lesbian bar, the Sleek Vanilla is also just two streets down from here.

While the rooms here are extremely basic, the hotel has a lively bar with a cabaret and karaoke. It’s extremely popular with gay locals and travelers. If you’re all about fetishes, try the Night People right across from the hotel. Their “Jock” underwear-and-sports-kit party sees attendance from everyone – bears, smooth, daddies, twinks, and more!

If you’re a culture nut looking to explore Manchester’s history as much as its Gay Village, stay at the beautifully designed, gay-friendly Roomzzz Manchester. Located right next to the Manchester Cathedral, Roomzzz is housed in the iconic, historic Manchester Corn Exchange building with spectacular original features. Roomzzz is an aparthotel, offering apartments of all sizes, along with fully-equipped kitchens and relaxing living/lounge areas. The place even has a gym and complimentary breakfast, but no other amenities. So, despite an obvious bit of luxury, Roomzzz manages to be an extremely good value hotel.

Roomzzz is a great central point for exploring Manchester’s obvious as well as offbeat cultural and iconic history. After touring the attractions, explore Manchester’s secret spots, local hangouts, and hidden gems on this extremely interesting walking tour. With the pickup point just five minutes from Roomzzz aparthotel, the personalized tour is led by a well-informed local and is sure to make you fall absolutely in love with Manchester!

If you’re looking to indulge in decadence not far from Gay Village in Manchester, the King Street Townhouse is your destination. Housed in a refurbished 19th-century Italian renaissance townhouse, King Street is akin to a home-away-from-home. Rooms are exquisitely furnished, some with bathtubs featuring floor-to-ceiling windows. These promise spectacular views of Manchester. There’s a jaw-droppingly gorgeous infinity pool to relax in or enjoy a swim with your partner. The rooftop bar is a great place for an evening cocktail and a meet-cute.

Emerge from the tranquility of King Street Townhouse become engulfed by the vitality of Manchester’s gay scene, barely five minutes away. Whether it’s a gay dance club you seek or a laid-back gay bar to enjoy a drink, Manchester’s Gay Village has something for everyone.

Get Some Culture in Manchester: