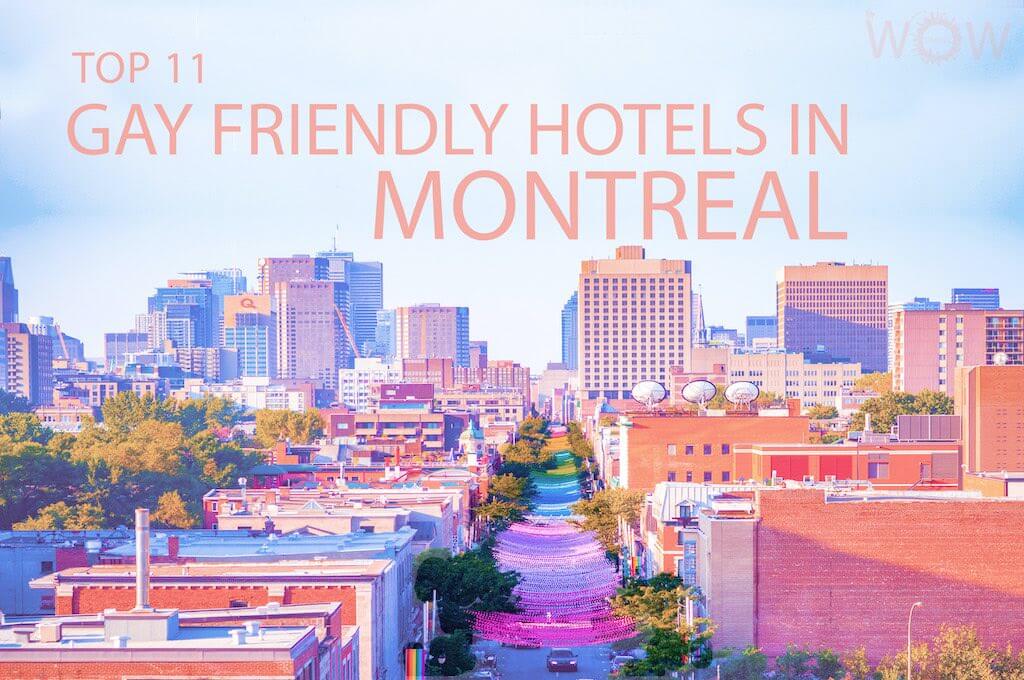 The proud, progressive Montreal has embraced LGBTQ culture and people with warm gusto. Montreal hosts a smattering of gay events and festivals, including the Montreal Pride parade. It is where the very first World Outgames, a leading world LGBT sporting event was held. Montreal is also home to one of the largest gay neighborhoods in North America, the vibrant, lively Gay Village Montreal. Gay Village is very close to Downtown Montreal, both of which make great destinations for LGBTQ travelers to stay for exploring Montreal and its many attractions. Check out the best top 11 gay friendly hotels in Montreal while visiting this gorgeous Canadian city.

The historical, gorgeous Château Versailles prides itself as having been a long-sought-after place of stay by numerous LGBTQ couples, friends, and even families. Part of the LGBT association, the Downtown Montreal hotel boasts of original architectural aspects dating back to the 18th century. Travelers can choose from seven types of elegant rooms and suites. They also have the comfort of a complimentary breakfast and a slew of modern amenities. All these make Château Versailles a great centrally-located and affordably luxurious option to stay in Downtown Montreal.

The only “hotel” in the Gay Village Montreal, the Hôtel Gouverneur Montréal a.k.a. Hotel Place Dupuis happens to be just down the street from where the bike tour of Montreal begins. The hotel features a host of modern room types with fabulous views of the city. The hotel is located near both Gay Village and Downtown, so one can explore Montreal by day. There are a host of gay saunas in the vibrant Gay Village, one of which is Sauna Centre-Ville. Frequented by locals, Centre-Ville is a great way to meet members of the local gay community.

One of the best luxury gay hotels in Montreal, the Fairmont became famous in 1969 when John Lennon and Yoko Ono staged a week-long, nonviolent Bed-Ins for Peace protests in room 1742 against the Vietnam War. Lying right on the route of the Montreal Pride parade, the Fairmont features spacious, gorgeously designed rooms/suites. Some of them even have outdoor terraces to catch a birds-eye view of the parade. The hotel has an indoor swimming pool and spa which are perfect for relaxing after a long day. Staying here also allows you easy access to a fascinating Underground City Tour of Montreal, the meeting point for which is the Fairmont!

Luxury doesn’t get any better than at Hotel 10, which houses Montreal’s most sought-after penthouse suites. The hotel lies right in the center of cool on the fringes of both Downtown and Gay Village Montreal. Hotel 10 checks quite a few boxes – it’s right across from the Main’s hotspots, it’s a great place for celebrity-spotting, and dogs are welcome! For LGBTQ travelers, staying at Hotel 10 is perfect if they want to indulge in an interesting burlesque walking tour of Montreal, whose meeting point is just five minutes away. The gay-friendly Bain Colonial Bath is a 10-minute walk, making it the best way to end a day of exploring the city.

Romance is in the air at Sir Montcalm Gite B&B, which is a tranquil, gay-friendly oasis of a hotel in the heart of the Gay Village Montreal. The intimate B&B has just five comfy rooms, of which the loft and suite with romantic balconies and garden-facing French doors are undoubtedly the best. The interior terrace garden is a perfect space for unwinding with your partner, along with a cuppa or a glass of wine. Some of Montreal’s best gay-friendly clubs like Complexe Sky, Le Stud, and Bar Renard are a stone’s throw from Sir Montcalm. Those into the “leather and jeans” subculture should definitely try out Bar Aigle Noir, which is a three-minute walk away.

Run by an extremely friendly gay family, Bed&Breakfast du Village in the heart of Gay Village will make LGBTQ travelers feel right at home. The quaint, homey B&B has five choices of rooms and a two-story cottage, all with brick walls and furnished in lovely pastel shades. A full, homemade breakfast is served in the spacious kitchen every morning. BBV’s outdoor patios are a great place to sit and enjoy a cup of coffee. BBV is walking distance from two of Montreal’s famous gay saunas – the busy Sauna Oasis and the fetish-friendly GI Joe.

If you love walking around to explore places, then the gay-owned, gay friendly Victorian guesthouse of La Conciergerie Montreal is perfect. Located near Gay Village Montreal and Old Montreal Port, La Conciergerie lies within walking distance of Montreal’s museums, galleries, and Downtown. The inn is also close to the gay saunas and bars in Gay Village. A short segway tour of Old Montreal Port with breathtaking views of Montreal at sunset is a great, unique way to explore the neighborhood. The modern rooms are furnished in majestic Victorian style. Clothing is optional on the sun deck, making it a comfortable place for LGBTQ travelers to stay.

For LGBTQ travelers interested in exploring Montreal’s culture, Le Méridien Versailles in the heart of Downtown Montreal is one of the best gay hotels in Montreal. The Museum of Fine Arts and the Salle Bourgie concert hall are just down the street from the hotel, and the McCord Museum is just a little farther up. With the bus stop right across the street, the Gay Village is just a five-minute ride away. Comfortable, well-furnished modern rooms with stunning Downtown views make this gay friendly hotel a great place to stay.

Located halfway between the Gay Village and Downtown Montreal, the boutique, luxury, spa-hotel of Hôtel William Gray is one of the best hideaways for romance in the city. The gorgeous rooms, some with balconies overlooking the river, literally inspire romance. The perfect way to end the day is to indulge in a spa session with your partner at this lovely gay friendly hotel. The extremely romantic gay friendly Bota Bota Spa is just a 10-minute walk from William Gray. Dining at the hotel’s splendid rooftop restaurant with stunning views is highly recommended.

Having hosted the LGBTQ series “Queer Me Out” series at the Montreal Pride parade, the W Montreal is one of the friendliest gay hotels in Montreal. Stay here and walk down to the attractions and sights of Downtown Montreal and end the day with a massage at the “Away Spa”. Some of the best gay bars and saunas in the Gay Village such as Le Stud and Complexe Sky are just three metro stations away. If you’re too tired to head there, then enjoy a drink with your partner at the lovely 1940-style hotel bar with stunning dark, intimate tones.

A chic, clear-glass entrance to a lovely Victorian-era brick building brings you to the Auberge Le Pomerol, an intimate, cozy hotel on the borders of the Gay Village Montreal. A member of the LGBTQ Chamber of Commerce, the tranquil gay friendly hotel is two minutes from the metro station. It is just one stop away from the Gay Village Montreal, its nightclubs, and saunas. If you prefer a laidback day, enjoy a cozy breakfast in bed and sit by the fireplace in the intimate lounge.

Get Some Culture in Montreal: