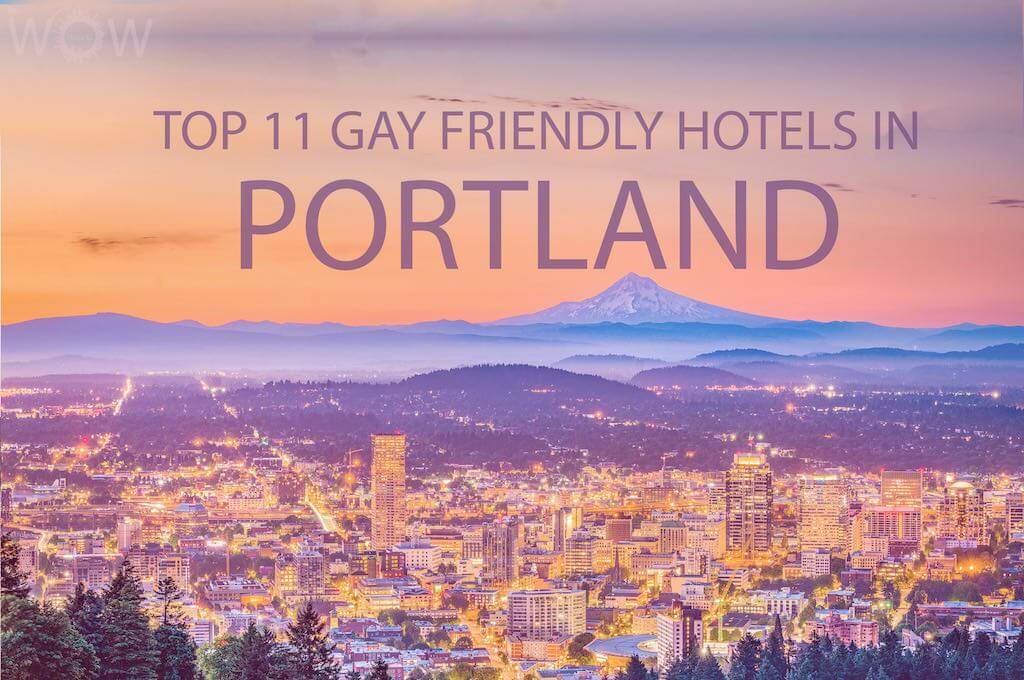 Rainbow flags fly high in many parts of Portland Oregon, a clear indication of how gay and liberal the city is. Although there’s no clear area demarcated as a true ‘gayborhood,’ Downtown Portland is where most of the action is. You’ll find plenty of gay friendly hotels in Portland in this area and the nearby Pearl District. Portland Oregon is a city that celebrates creativity, individuality, and non-conforming lifestyles. You’re definitely going to love the ‘weirdness’ of the city, which is quirky yet brimming with top-class attractions. Historical wonders, an abundance of natural beauty and a great culinary scene make this city special. However, note that there are no exclusively gay hotels in Portland Oregon unlike Palm Springs or Miami.

There is a lot of things to do in Portland even if you’re only here for Pride week. The Portland City Afternoon Tour is extremely convenient especially after a hard night of partying.

Spacious guest rooms vary in category and size. All rooms have large windows that allow ample natural light and have modern amenities for a comfortable stay. The suites have extra-large baths that have a step-in shower and a soaking tub. Woodlark also has a trendy restaurant, fitness center and a chic cocktail bar.
Check Rates & Book Now

Where the West End and Pearl District converge is one of the most vibrant neighborhoods in Portland. This is where you’ll find The Mark Spencer Hotel, one of the more popular gay friendly hotels in Portland. This hotel’s also housed in a vintage building. Quite obviously, its superb location, within walking distance of everything, contributes a lot to its popularity. The hotel attracts a younger hipper clientele.

Portland loves hip and vintage and this trait is evident in the hotel’s overall design. Stylishly designed guest rooms equipped with a wide range of amenities offer a comfortable stay. Although the hotel is not big on facilities, it provides a basic complimentary breakfast. It also has a small gym and a coin-operated laundry service. The communal spirit of the surroundings seeps into the lounge lobby with wine and cheese tastings in the evenings.
Check Rates & Book Now

Another historic building converted into an impressive hotel is The Society Hotel. Its dark green facade stands out amongst the other buildings in the area. Although its building dates back to the 1880s, this boutique hotel is a fairly new kid on the block of gay hotels in Portland Oregon. Situated in the historic neighborhood of Old Town Chinatown, the hotel is hardly a few steps away from the gay nightlife of the area.

The former boarding house for sailors maintains a quirky and colorful atmosphere. It has a fun and youthful vibe with a gorgeous rooftop deck. Rooms are on the smaller side and many come with shared bathrooms. If you don’t like sharing, then opt for the ‘private suite,’ which has an ensuite bathroom. Although not big on facilities, the hotel has a pretty good cafe in the lobby.
Check Rates & Book Now

The Nines is one of the more upscale gay friendly hotels in Portland. Housed in a historic building in the center of the best shopping in downtown, this luxury hotel is a combination of history, eco-consciousness, and modern elegance. Shopaholics will love the location of this hotel but it’s not too far from other attractions either.

Built in 1909 as the headquarters of one of the biggest retailers west of the Mississippi, the hotel has come a long way since then. Rooms are elegantly designed, matching the color scheme of the halls. Dark wood, black doors, and patterned taupe wallpaper are the hallmark of all the rooms. The rooms are well equipped with modern amenities. They feature large ensuite marble bathrooms. Amenities at the hotel include two on-site restaurants, a fitness center, and a billiards room.
Check Rates & Book Now

If you’re looking to be right in the midst of all the action, you couldn’t find a better hotel than Sentinel. Located right in the middle of downtown Portland, the hotel puts you within walking distance of the pulsating gay nightlife and other attractions such as the Portland Art Museum. Not surprisingly, the Sentinel is one of the more popular gay friendly hotels in Portland.

What makes the Sentinel stand out is its architectural details like the Corinthian columns and the intricately carved ceiling in the lobby. Not to be missed is the mysterious carved imagery from the old Elks Lodge. The hotel started out as two separate buildings, the Elks Lodge and Seward Hotel and that’s why the elevators seem slightly confusing.

Taupe leather chairs and dark colors in the guest rooms give them a masculine feel. The classy rooms have modern conveniences and an ensuite bathroom with a bathtub. For those who prefer dining in, the hotel also has two on-site restaurants.
Check Rates & Book Now

Another hotel that tops the gay friendly hotels’ list in Portland is the funky McMenamins Crystal Hotel. Also located downtown and housed in a building that dates back to 1911, the hotel has donned many different hats over the years; from alternating between a hotel and bathhouse. A remnant of its bathhouse days is the freeform saltwater soaking pool in the basement.

The 51 charming guest rooms at the hotel reflect its quirky vibe. Rooms are themed according to songs performed at the historic Crystal Ballroom just across the road. Onion dome headboards display hand-painted murals that represent the work of famous musicians. Although the hotel provides earplugs, the noise from other rooms and the street might be a problem.
Check Rates & Book Now

You’re spoilt for choice when it comes to top-notch gay hotels in Portland Oregon, as the luxurious Kimpton Hotel Monaco clearly shows. Like its contemporary in Palm Springs, the Kimpton Hotel Monaco also has a great location in downtown Portland. Less than five minutes away from the hotel, you’ll find the bustling Pioneer Square. Pearl District is also minutes away. Downtown Portland is where you’ll find many of the other attractions of the city, including a vibrant gay nightlife.

Housed in a historic 1912 building this boutique hotel is artsy, luxurious, and a bit quirky too. The evening cocktail hour is accompanied by canvases, easels, and brushes for guests to explore their artistic side. Bright large rooms are tastefully designed with plush beds and high-tech amenities. Guests at the hotel can also enjoy the facilities of the spa and wellness center. The hotel also has an on-site bar and restaurant.
Check Rates & Book Now

There are plenty of affordable gay hotels in Portland Oregon to choose from and if you’re looking for something affordable and trendy, Jupiter Hotel is a great choice. A converted motor lodge with a great location offering easy access to the city’s attractions is what makes this hotel special.

This artsy hotel has an art gallery in its lobby that features emerging artists. It also has other on-site events and a great restaurant that features live music. The rooms here are quite compact but clean and stylish. Clean, spacious ensuite bathrooms come outfitted with bathtubs.
Check Rates & Book Now

Hotel Rose strives to keep the perception of ‘weird Portland’ alive with its eclectic furnishings and colorful rooms. Its funky vibe and great location on the waterfront in Downtown Portland pushes it to the top of popular gay hotels in Portland Oregon.

The art-deco inspired decor is evident throughout the hotel, right from its colorful lobby to the interesting restaurant. Large comfy rooms with modern conveniences are what you can look forward to here. Some rooms have stunning views of the waterfront. Ensuite bathrooms are modern and spacious with oversized showers. Other amenities that you can look forward to at one of the more affordable gay hotels in Portland Oregon are a gym, an on-site bar, and a restaurant. The bar features live music, especially jazz.
Check Rates & Book Now

Located in Downtown Portland, the Dossier is representative of the Westin brand but more intimate than its other properties. Its location in one of the most sought after locations in the city also makes it one of the more sought after gay hotels in Portland Oregon. The hotel is just a two-minute walk from Pioneer Square and also within an easy walking distance of the gay nightlife in the area.

Clean, modern rooms offer great views from huge windows which allow ample natural light. Equipped with trademark Heavenly beds and amenities, the rooms are more cozy and intimate than the other Westin properties. Wifi is free in the lobby but chargeable in the rooms. Many bathrooms have large soaking tubs. Other amenities that guests can look forward to are a fitness center, spa, and casino.
Check Rates & Book Now

Like its counterpart in Chicago, the Ace Hotel is one of the most gay friendly hotels in Portland. This hotel is no stranger to the LGBT community with its trendy design and affordable pricing. The hotel’s location at an easy walking distance from the artsy Pearl District, Powell’s City of Books, and gay bars places it right up there in popularity.

Opened in 1912 as the Clyde Hotel, Ace maintains some of the original quirks. The narrow lift, beige brick exterior and the lack of private bathrooms in some rooms reflect its past. The facilities offered are minimal but you get what you pay for. However, if you’re looking for affordable accommodation in a fashionable downtown hotel, the Ace is your best bet.

The decor which focuses on the rustic varies from one room to the next. Some rooms are spacious while the cheaper rooms are more compact. Rooms have a well-stocked minibar, a 32 inch flat TV and free wifi. A few rooms even have record players with a mix of music. Although the hotel is not big on facilities, it has a pretty good restaurant Clyde Common. And all of these make it a great contender for the 11 Best Hotels in Portland.
Check Rates & Book Now

Get Some Culture in Portland: