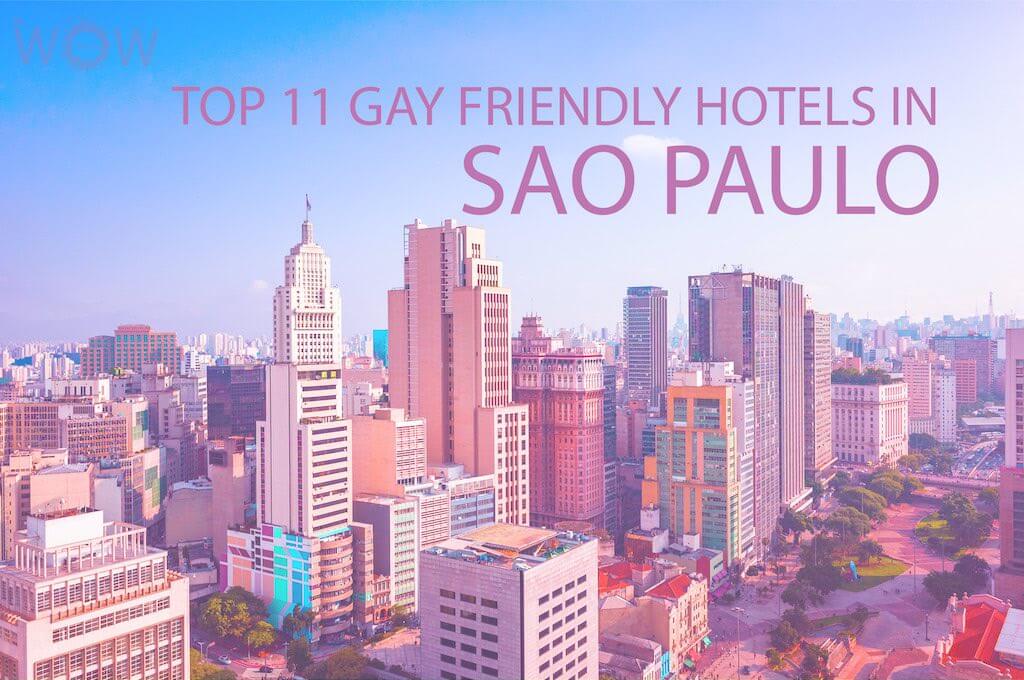 One of the most gay-friendly cities in the world Sao Paulo is located on the gorgeous South American continent. Gay Pride Sao Paulo has been attracting millions of people for over a decade now. The gay Sao Paulo map stretches far and wide, and popular gay neighborhoods like Consolação “Gay Caneca” and Jardins are now joined by areas like Largo do Arouche and Pinheiros. In recent times, gay hotels in Sao Paulo have risen in number as the city embraces a welcoming and warm LGBTQ-friendly culture.

Sao Paulo might be less in-the-face gay-friendly as compared to Rio de Janeiro, but the city has blossomed beautifully and come out of the closet in the last 10 years. The first Gay Pride Sao Paulo in 1997 was attended by around 2,000 people. The number swelled to more than three million 10 years later, making Sao Paulo’s Pride one of the world’s biggest pride parades. The city is also home to a very vibrant gay nightlife and many bars and clubs still have parties going on until morning! There’s even a gay shopping center with a majority gay clientele called the Shopping Frei Caneca.

In the heart of Sao Paulo’s Consolação neighborhood lies the budget Hotel 155, right next to the vibrant gay nightlife on Augusta Street. The gay bar Ella is right next door, while a better part of the gay Sao Paulo map lies within a three-street radius. Hotel 155 is also a 10-minute walk from the gay-central Frei Caneca Mall. Interestingly, Hotel 155 also happens to be the first gay-only hotel in the city.

The contemporary budget hotel features basic but clean rooms, while the suite rooms even separate living areas. Although the windows are soundproof, noise from the busy Augusta Street could float in. However, those gay travelers looking for budget hotels near the gay scene of Sao Paulo will find Hotel 155 perfect.

The Japanese-style Blue Tree Premium Paulista is a perfectly located gay hotel in Sao Paulo. The Frei Caneca gay shopping district is a 10-minute walk away. Some of the best gay bars in Sao Paulo such as Tunnel, the city’s oldest gay club, and the themed Club Yacht are also a 10-minute walk. So, its fun to go bar-hopping and then get some much-needed sleep at the serene, tranquil Blue Tree.

The Blue Tree Premium Paulista is an extremely well-run hotel with spacious, modern rooms. It is a great base to explore the sights of Avenida Paulista, which is home to an amazing museum, markets, restaurants, and more. For those who wish to get a taste of what Sao Paulo is about, we recommend this 3-hour city tour which offers a fantastic glimpse into historical and modern Sao Paulo.

If you want to explore the gay Sao Paulo map extensively, then there’s no place better than staying at the TRYP Sao Paulo Paulista Hotel. Nestled in the heart of the lively gay neighborhood of Consolação and two blocks from the busy Avenida Paulista, the gay hotel is a stone’s throw from the gay Sao Paulo map. Dance the night away at the famous LGBTQ Bofetada Club or enjoy some pre-evening drinks at the gay bar Igrejinha, both 10 minutes away. If you fancy a soak and some steam, the gay sauna Espaco Lagoa is less than a 10-minute walk too. What’s even better is that the hotel is a block away from where the Gay Pride Sao Paulo takes place.

Business-class, contemporary rooms and a hearty complimentary breakfast gets you going every day at the TRYP Paulista. If you’re in the mood to splurge, you should know that the suites feature balconies and hot tubs overlooking the city.

The 269 Chilli Pepper Single Hotel is one of the best gay Sao Paulo hotels to stay at if you want to delve headfirst into Sao Paulo’s fantastic gay scene. After all, the hotel is home to the gay sauna named Chilli Pepper, where three floors of hedonism mean tons of steamy encounters. The men-only gay hotel is located in the heart of the gay Largo do Arouche neighborhood. In fact, the extremely popular gay dance club ABC Bailao, and the gay bars, Metropol Bar and Soda Pop Bar, are all two streets away from the 269 Chilli Pepper!

What’s more, the hotel has great rooms and tons of cruising spaces in the form of the sauna and multiple swimming pools. So, if gay revelry is what you seek, the 269 Chilli Pepper and its fantastic location will surely reel you in.

A fairly lax overnight guest policy and a location close to where Gay pride Sao Paulo happens makes the Golden Tulip Belas Artes one of the best gay hotels in Sao Paulo to stay at. The newly-renovated hotel features chic, modern, and spacious rooms and lies right on Frei Caneca street, a 10-minute walk from the gay shopping district.

While the gay Sao Paulo map areas at Consolação are just a short walk away, those with dancing shoes can take the metro 15 minutes away to the spectacular gay nightclub The Week. Once Brazil’s (and even Latin America’s) biggest nightclub, it features everything from shirtless dudes and to a pool!

One of the most impressive gay hotels in Sao Paulo is the one-of-a-kind Hotel Unique on Av. Brigadeiro Luís Antônio. Shaped like the hull of a ship, its well-known rooftop pool-bar, Skye features stunning 360-degree views of Sao Paulo. Skye is one of the best places to meet gay locals and travelers in the neighborhood over drinks while enjoying spectacular views of the city. Also lying a 20-minute ride away along the Av. Brigadeiro Luís Antônio is the legendary gay scene of Consolação where you can also sip, flirt, and dance the night away.
Rooms at Hotel Unique are architecturally striking, and if your night’s revelries result in you bringing a guest over, the room is sure to impress them. Blackout screens help you sleep off any possible hangovers the next morning.
Hotel Unique lies right next to the massive green space of Ibirapuera Park, Sao Paulo’s green jewel in its crown. It is also home to a host of important art and cultural spaces and exhibits. Explore what is one of the best green spaces in Sao Paulo on this fantastic 2.5-hour walking tour.

If you’re one who appreciates the little things in life, you will love the Hotel Guest Urban. Housed in a ‘renovated 60s townhouse, this hip gay hotel lies in the happening neighborhood of Pinheiros. This boutique gay hotel in Sao Paulo features a distinctly industrial feel, with lovely vintage knick-knacks and touches. While the rooms aren’t exactly spacious, they’re wonderfully modern in function. Staying at Hotel guest Urban is a great way to meet fellow gay travelers, especially at the Deck Winespot Party that the hotel hosts twice a month.

The hotel lies in the heart of the Pinheiros neighborhood, making it extremely easy to explore during the day. Come evening, and you can head to the gay scene in the Consolação neighborhood via the convenience of the metro. If you don’t wish to head out that far, the superb gay/mixed nightclub Bubu Lounge is a mere 15-minute walk.

If you’re looking for some well-deserved luxury on your Sao Paulo vacation, the award-winning gay-friendly Hotel Fasano is where you should be. Occupying a prime position in heart of São Paulo’s Jardins neighborhood, the hotel is nestled off what is perhaps the trendiest designer-shopping street of South America – Rua Oscar Freire. The rooms are funky and clean-contemporary in equal measure, and the indoor pool is great for a heavenly swim. It’s great for meeting cute and handsome men. Do book massages with your partner at the Zen-like spa and sauna.

The gay Sao Paulo map at Consolação’s a little away, but the metro ride is a two-minute one, and the walk to the metro station is five minutes. If you’re looking for something more risque, there’s a whole lot of adult entertainment stuff at Lovetoys, a sex store barely five minutes away.

Located right across from the Consolação metro station is the lovely, gay-friendly hotel of Meliá Paulista, right on the route of Gay Pride Sao Paulo. Just a 10-minute walk away from Sao Paulo’s amazing nightlife and bars, the Melia Paulista lies on what is one of Sao Paulo’s most important streets – Av. Paulista. In fact, staying here is great for indulging in this superb 3-hour walking tour along Paulista Avenue, its rich history, architectural wonders, and what it is today. What’s more, most of the city’s attractions within amazing reach from the Consolação metro station.

Rooms at the Melia, albeit a little noisy on the lower floors, are modern and spacious. The hotel itself doesn’t feature any amenities such as a spa or a pool. However, it’s a value-for-money hotel with a location fantastic for enjoying Sao Paulo’s gay scene as well as exploring the culture of the city.

Located in the heart of the vibrant gayborhood close to the small park in downtown Largo do Arouche is the gay-friendly San Michel Hotel. The San Michel is of the most friendly of the gay hotels in Sao Paulo with a staff that’s extremely helpful. Gays will love the San Michel for its proximity to Sao Paulo’s gay nightlife. In fact, the gay dance club Cantho is right next door, while the other popular bear and daddy bars are right down the street.

Rooms at the San Michel are large and comfortable. Some of Sao Paulo’s best attractions including the Liberty Square, the Municipal Theatre, and Rua 25 de Marco are within a comfortable walking distance of the hotel.

The gay Sao Paulo map and scene is a short 15-minute stroll away from here. This makes the hotel particularly great for afterparties, especially after a night of revelry at the gay clubs and bars. The Consolação neighborhood even has some fantastic adult entertainment stores for those looking for something kinky. In fact, the gay shopping space of Frei Caneca is just 20 minutes away from Transamerica Executive Paulista.

Get Some Culture in Sao Paulo: