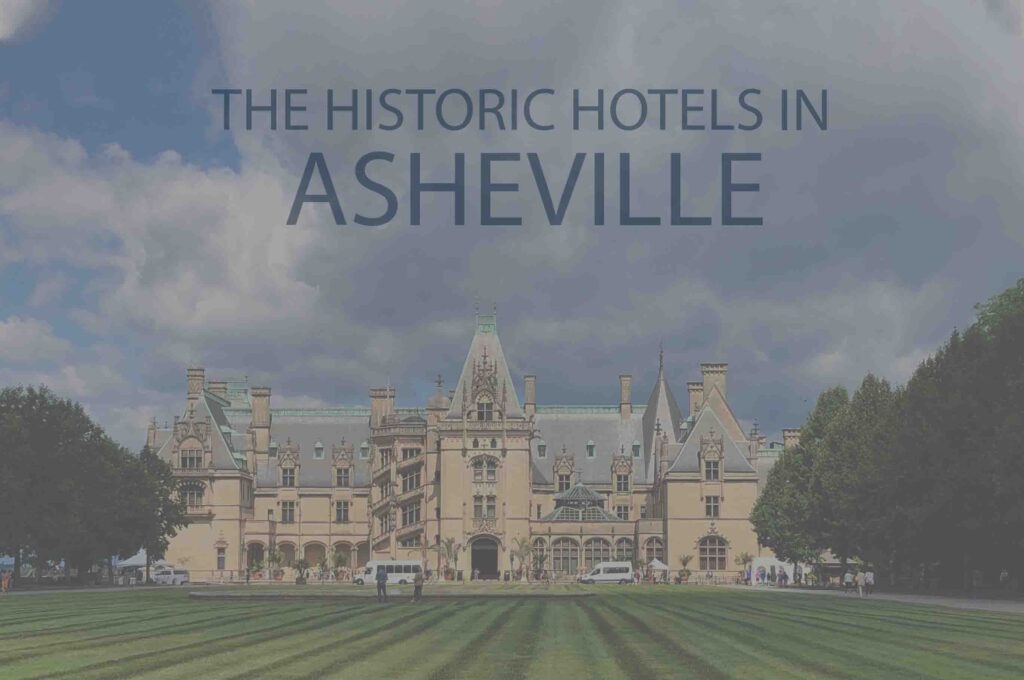 Asheville is nothing short of interesting but a huge city with a small-town feel. Thanks to its magnificent mountain views, lip-smacking food, and numerous art galleries and museums, a visit to Asheville will never be boring. There’s always something to do for everyone. And if you’re a history buff, you’ll love this city even more! Spend your nights at a historic hotel in Asheville, North Carolina, and you can thank us later! These hotels will transport you back in time and have plenty of stories for you to unfold. Despite being “old,” you don’t have to worry as many of them are moments away from the downtown area and Asheville’s must-visit destinations. Let’s not waste any more time and look at the historic hotels Asheville has for you!

Kicking off this list is the Black Walnut B&B Inn, a gorgeous historic hotel in Asheville, North Carolina. Like many others in the area, this inn was built by one of the supervising architects of the Biltmore Estate, Richard Sharp-Smith, in 1899. Once Lori and Peter White purchased the inn, it was restored to showcase its historic charm and character. At the same time, they added modern amenities like air conditioning and Wi-Fi!

As a member of the National Register of Historic Places, this property has been beautifully maintained throughout the years. Today, it’s the perfect base for exploring Asheville, as the downtown area is only a short walk away, and so are some of the city’s most prominent destinations. Oh, have we mentioned that this accommodation is one of the best pet-friendly hotels in Asheville?

Within easy walking distance of downtown Asheville, a stay at Chestnut Street Inn will certainly be interesting, mostly because of its history. According to the innkeeper, Thomas Wolfe once spent most of his time at the inn while his include JM Westall was building it. They also spent the summers at the Whitson’s Cabin in Enka, who was one of their good friends.

Through the 1960s, the inn served as a residence for single mothers. Here, dozens of infants were born. Today, this beautiful historic hotel in Asheville, North Carolina, boasts eight well-appointed guestrooms with classical decor. And if you’re looking for things to do, the downtown shops and restaurants are just a few minutes away on foot.

The Beaufort House Inn is where old-world charm marries modern luxury. As one of the city’s best-kept secrets, this historic hotel in Asheville, North Carolina, is sure going to surprise you. This Victorian-style home was built in 1894, and actor Charlton Heston once stayed there for around six months. After that, the property was bought and has changed hands several times.

However, it wasn’t until 1993 that Robert and Jacqueline Glasgow decided to buy the home. Three years later, it was completely turned into a beautiful B&B. For many years after that, the inn, a member of the National Register of Historic Places, has done nothing but thrive! GBX Group, LLC now owns the inn, and it’s arguably one of the most sought-after B&Bs in Asheville.

Homey and gorgeous, staying at the 1900 Inn on Montford is a dream come true. As you can guess from its name, the inn was originally built in 1900 and is set in none other than Montford, the city’s most historic neighborhood. Like many other B&Bs in the city, this one was initially designed as a family home before it turned into a boarding house. And just over 100 years ago, it became a prominent Bed and Breakfast in the city.

Additionally, this historic hotel in Asheville, North Carolina, joined the National Register of Historic Places in 1993. That’s not all, though! In 2012, it also received the Griffin Historic Preservation Award! Brimming with stories in every corner, this accommodation is one of the best places to relax and go back in time. And to make your stay even more enjoyable, it also holds live music every Saturday night! Lastly, this hotel is also named one of the most romantic hotels in Asheville!

As one of the longest operating Bed and Breakfasts in Asheville, adding The Applewood Manor to this list is a no-brainer! This classic red facade is nothing but amazing. According to the hotel’s owner, the building was built in 1912. Though this property is ancient, it has changed only a little since it was built. This New England-style home was designed to be a family residence. Then, in the 1980s, it was sold and has changed hands nine times until 2021! Pretty amazing, isn’t it?

Though this six-room lodging looks like it’s set in a forest (because greeneries surround it actually only moments away from Biltmore Estate and other top Asheville destinations. And for your convenience, it also offers bike rentals! But you don’t have to venture out to have fun, though. That’s because this charming inn boasts luxurious amenities and plenty of artwork throughout the home for you to admire.

Aside from offering a yummy morning buffet, the Albemarle Inn also offers a delicious side of history for history buffs as well! This three-story mansion was originally built in 1909 as a residence for local physician Dr. Carl V. Reynolds. Actually, the mansion was originally named after him, making it a standout at that time. Fast forward to 1921, it was bought and used as the Grove Park School for Girls’ administrative building before turned into a boarding house shortly after.

It was in 1941 when the Albemarle Inn was established. Then, in the year 1980, it was transformed into a beautiful Bed and Breakfast. Like many other hotels on this list, the inn has changed hands many times since then. However, the meticulous architecture and design of the original building can still be felt. This accommodation is worth considering for those who want to taste Asheville’s history and be near some of the city’s must-visit attractions.

The Lion and the Rose Bed and Breakfast

Up next on this list is The Lion and the Rose Bed and Breakfast, a charming historic hotel in Asheville, North Carolina. This B&B was originally Elmer and Charity Rush Craig’s North Carolina home. The Toms’s family then bought this neo-classical building3. Though the inn has been renovated countless times, it still has its original splendor up to this day. You can still witness the elaborate golden wood columns at the entrance, which are one of the most eye-catching architectural features on the property.

Since it began welcoming guests in 1985, this gay-friendly hotel in Asheville, which is also one of the city’s oldest B&Bs, has received numerous honors. They include the Best Asheville Bed & Breakfast and the Most Beautiful Gardens. Those who want to go back in time will love spending their nights here. Not to mention, the modern attractions of downtown Asheville are only around a mile away!

As a popular and beloved historic hotel in Asheville, North Carolina, Princess Anne Boutique Hotel & Breakfast has plenty of stories to tell. Built in 1922 and opened in 1924, this beautiful B&B used to be many things. It once served as the Appalachia Psych Hospital’s annex. Apart from that, it used to be a retirement home and an apartment complex as well! And depending on who you ask, they might say the hotel is haunted! If you love the adrenaline of staying at a spooky hotel, check out our list of the most haunted hotels in the world!

Since it first opened, the hotel has been renovated numerous times. And after the addition of newer amenities, the Preservation Society presented the hotel with the Griffin Award in 2006. Today, this gorgeous boutique hotel is known for its old-world charm and modern comforts. Not to mention, it’s only a short walk away from some of the downtown’s top eateries and shops!

Originally the first premium department store in downtown Asheville called “Bon Marché,” The Haywood Park Hotel, Ascend Hotel Collection is another great addition to our list. Since it made its debut in the 1890s, the department store has done nothing but skyrocket to the top! Because of this, the owner decided to build another flagship store. By 1923, Bon Marché was already one of the city’s most hanging out spots. Then, in 1937, the store moved across the street. The owner’s son, Lewis Lipinsky, then would manage the department store. However, he wanted something more modern for the business. It was then another retailer, Ivey’s Department Store, moved into the structure.

Ivey’s would continue to operate in the former Bon Marché department store for many more years. Surprisingly, it left the structure for some time in 1978. In 1985, a group of aspiring hoteliers bought the property and transformed it into a beautiful boutique hotel. It then quickly became one of the city’s most prominent holiday destinations. After that, in 2011, The Haywood Park Hotel Ascend Hotel Collection joined the Historic Hotels of America.

Travel back in time to an illustrious era of history at The 1899 Wright Inn & Carriage House! This historic hotel in Asheville, North Carolina, is the ideal place for your upcoming Asheville holiday. It’s a beautifully renovated Queen Anne-style Victorian mansion that won’t disappoint. Built in 1899 for Osella B. and Leva D. Wright, this inn is one of the city’s greatest remaining examples of a Queen Anne-style home with Colonial Revival influences. As the name suggests, there’s a companion carriage house next to the main house. It’s used by the home’s early occupants to keep their horse and carriage.

After Leva D. Wright passed away in 1946, the lodging changed hands several times. It wasn’t until the late 1980s that the inn was rehabilitated and used as a B&B. Today, this inn is loved because of its exquisite accommodations with contemporary amenities, gorgeous gardens, and delectable breakfasts. If you’re looking for a homey and comfy accommodation with top-notch hospitality, this is the one!

Taking our number one spot is The Omni Grove Park Inn. To many, this is the most historic hotel in Asheville, North Carolina, and we completely agree. As a Historic Hotels of America member since 2000, this hotel was originally called the Grove Park Inn and made its debut in 1913. Then, in 1944, the Army Redistribution Station was set up at the inn for American soldiers who were eager to rejoin the front lines. In addition, the structure also served several other military purposes during World War II.

In 1955, Charles Sammons bought the hotel and expanded the building, which resulted in the addition of several new amenities. Throughout the years, the hotel has undergone plenty of renovations. However, the biggest one was probably in 1988, when the hotel’s luxurious spa was added. Fast forward to 2013, Omni Hotels and Resorts acquired the hotel. After that, it began an extensive renovation and rebranded the hotel as “The Omni Grove Park Inn”!

Recommended Things To Do in Asheville