11 Most Haunted Hotels in the World 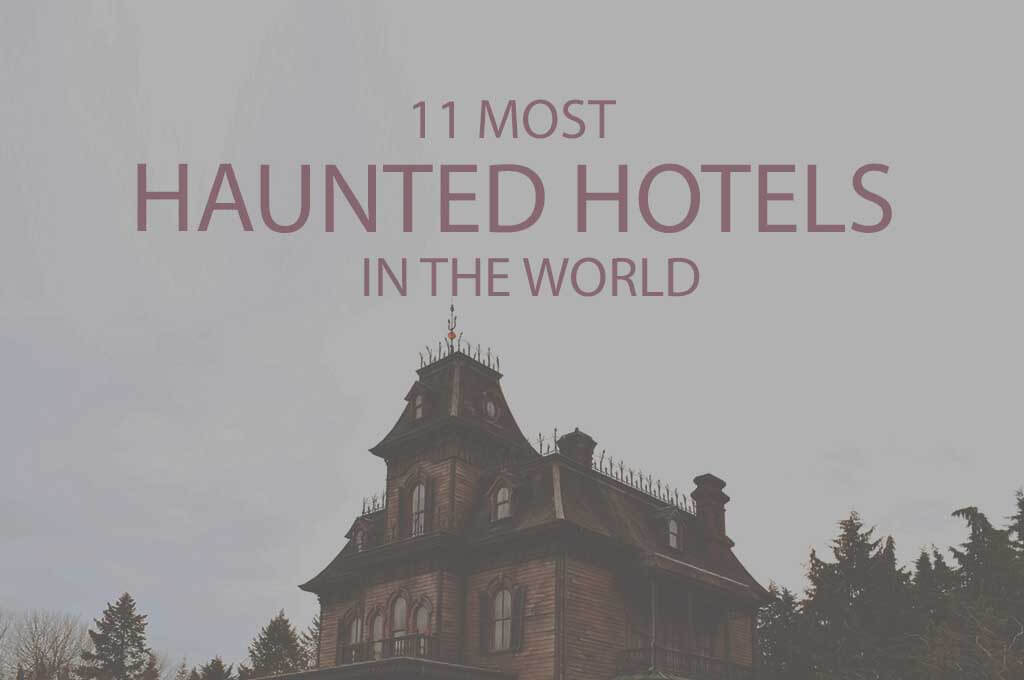 There are a lot of eerie places around the world, but there’s something extra sinister about haunted hotels. Thrill-seekers find something frightfully entertaining about spending the night in a hotel with a spooky history. This is partly thanks to films such as The Shining, and its real-life inspiration, the haunted Stanley Hotel, which is the scariest hotel in the world. Whether it’s movies, TV shows, or word of mouth, the most haunted hotels in the world see crowds of travelers who want to experience the same thrill. What’s more, the same haunted hotels can also be highly luxurious, especially castles, palaces, and mansions-turned-hotels. Moreover, they have more than just a few urban legends to get your heart hammering – let’s call it extra spirit! Many haunted hotel enthusiasts attest that most of these haunted hotels have a few “long-term” residents if you know what we mean.

So, whether it’s an upscale and buzzing hotel in the heart of Hollywood or one smack dab in the middle of the Canadian Rockies, these hotels have one thing in common – they house spirits, or legends, at least. To that end, here are the 11 most haunted hotels in the world.

The Hollywood Roosevelt Hotel in Los Angeles is one of the most haunted hotels in the world. In fact, its ghosts are also amongst the world’s most famous; think Marilyn Monroe’s spirit! The place has a long and storied history and was where the first Academy Awards were hosted way back in 1929. What’s more, many film stars checked in here, but it seems some never checked out. Reportedly, Marilyn Monroe’s spirit hangs out in the full-length mirror of the poolside Suite 1200, which she was fond of. Some have even seen her ghostly figure in the reflection of a huge mirror on the ground floor opposite the lifts.

Like Monroe, many actors and performing artists who hung around the hotel in life have hung around it long after their deaths. Some include Errol Flynn, Carole Lombard, and even Montgomery Clift. Clift’s baritone echoes everywhere in his old suite. Given the hotel’s title as LA’s oldest continuously operating hotel, you’ll get the jeepers even if you aren’t a fan of ancient legends.

The Fairmont Banff Springs in Banff National Park is easily the scariest hotel in the world. This 1888-built chateau-style hotel in the heart of the Canadian Rockies was designed to sell train tickets and prompt Western tourism. The luxurious hideaway nestled amidst spectacular scenery naturally has attracted scores of travelers for decades. But, they’ve also come for the much-talked-about paranormal, almost borderline Gothic activity on the inside.

People have reported several ghosts wandering the walls, the most famous of them all being the Ghost Bride. She had reportedly fallen down the stone staircase during her wedding and continues to search the hotel for her husband to date. There’s also a more genial and less tragic spirit in the form of Sam the Bellman. He worked at the hotel until 1975 before checking back in as a spirit. Many guests are convinced that they’ve been helped by the spirit of Sam, especially in helping them with their bags. It’s no surprise that this place is amongst the most haunted places in the world.

The Langham in London is touted to be one of the most haunted hotels in the world. Most of the paranormal buzz and activity at the 1865-built hotel comes from room number 333. Only the bravest living souls check into this room, where people have reportedly seen everything from a military-style jacket-donning German prince to a Victorian-era doctor. The former jumped from the fourth floor while the latter killed both himself and his wife on their honeymoon – talk about spooky. If that wasn’t enough, even the ghosts of a powdered wig-wearing footman, a shoeless butler, and the great Emperor Napoleon III himself have been seen around.

The spirits are so active at this centuries-old hotel that many English national cricket team players scrambled out in 2014. They cited sudden lights and heat all over, with unexplained presences during the night. Brrr! The hotel is so popular that it features in many books and films, including Sir Arthur Conan Doyle’s 1880s-set Sherlock Holmes novels.

The Queen Anne Hotel in San Francisco is quite literally the scariest hotel in the world. The cozy B&B hotel was originally the Miss Mary Lake’s School For Girls, an etiquette school. Reportedly, it’s none other than the ghost of the strict headmistress, Miss Mary Lake, that haunts the hotel. Since the school was sold against her will, she roams the Victorian-style hotel even today. You’ll find her, especially lingering around room number 410, which used to be her office. Those who stay there have woken up to find blankets tucked around them in bed, their pillows fluffed, and even their clothes unpacked. While this ghost knows her etiquette, we aren’t sure the guests would agree! The moral? Not all ghosts are evil, so don’t judge a spirit by its cover.

The Russell Hotel in Sydney is amongst the most haunted hotels in the world. The gorgeous boutique guesthouse-hotel is the perfect place to lay your weary heads after a long flight to Australia. It lies in The Rocks, Sydney’s oldest neighborhood and a once seedy part of the town. It was the favorite haunt of rowdy seamen and bawdy sailors who wanted a place to rest before heading out to sea again. Later on, the place was even a makeshift hospital during an early 1900s bubonic plague outbreak. Today, it might have stepped into modernity, but the spirits of its past remain at the hotel today.

It’s said to be the haunt of a colonial-era spectral sailor who loves to lurk around the entrance halls and the rooms, especially room number 8. He’s said to cast his ghostly gaze over guests, paying special attention to women who’re spending the night here.

The Omni Grove Park Inn is one of the scariest hotels in the world. This marvelous architectural gem was built way back in 1913 on Sunset Mountain outside Asheville. F. Scott Fitzgerlad was one of the most famous guests at this hotel. No, it’s not his ghost you’ll encounter (unfortunately), but it’s that of another 1920s figure – The Pink Lady. It was way back in the 1920s when a young woman was either pushed or jumped to death from her fifth-floor room number 545. Even a century later, guests and employees both report sensing or seeing her presence, most often as a woman in a flowing pink gown or a pink mist of sorts. The chills you feel and the pastel mists you’ll see will certainly give her away. But, it’s alleged that young children are especially sensitive to spotting her. Jeepers.

One of Santa De’s best luxury hotels is also the most haunted hotel in the world, namely the La Posada de Santa Fe Resort. It’s one of Santa Fe’s most elegant and oldest places to stay, but it’s also famously haunted by the original owner’s wife. The 1882-built mansion was home and a gift from entrepreneur Abraham Staab to his wife, Julia, who loved the place. So much so that there’s a chance she might have never left. After her eighth child passed away shortly after birth, she became holed up in her room due to deep depression, never to be seen again after 1896. In the flesh, of course.

Her former bedroom is the elusive suite number 100. Today, people choose to stay either in the original main house or quietly in one of the studios surrounding it. But, if you decide to stay in suite number 100, ensure that you greet her pleasantly, just like the staff does. You might even want to compliment her gorgeous home to stay in her good graces.

The Omni Mount Washington is, without a doubt, the scariest hotel in the world. Like other hotels on this list, the 1902-built Omni is one grand place with an even grander history. Some amazingly noteworthy guests, including three U.S. presidents and Thomas Edison, have been guests here. What’s more, there even have been sketchy guests, such as Carolyn Stickney, the widowed wife of the hotel’s original owner. Legend is that she stuck around after her death. The Victorian lady of an invisible inhabitant brushes her hair at the foot of her four-poster bed, occupying one of the third-floor rooms. She also doesn’t mind tapping on doors and has no qualms about borrowing your stuff either. If you aren’t a fan of paranormal activity, spend time on the hotel’s sprawling front porch.

Imagine being surrounded by the ghosts of people who lost at a casino. That’s what makes The First World Hotel in the Genting Highland in Malaysia one of the most haunted hotels in the world. The hotel has a bit of everything and boasts a theme park and a tropical rainforest on its property. But, its most intriguing attraction is the paranormal activity. Visitors have reported having suffered sleepless nights due to poltergeists wandering the halls of this hotel. These noise-making nightwalkers are rumored to be the ghosts of high rollers who lost big at the 24-hour casinos. Yikes.

Interestingly the hotel is also the largest hotel in the world, and its location atop the Titiwangsa Mountains means the surrounding scenery is beautiful. So, if you don’t mind gambling with ghosts, then make your way to this hotel, which lies right outside Kuala Lumpur.

The alluring Hotel Burchianti is the scariest hotel in the world. This spooky spot is a former 1930s hangout spot of Benito Mussolini, and that’s partially why it’s haunted. For one, people have reportedly spotted a spectral maid cleaning the rooms in the early hours and even a phantom old woman knitting in a lobby chair. Are you one of those chaps for whom the bigger the scare, the better? Then book the Fresco Room, where an eerie presence haunts the room and even radiates icy breaths. Mussolini once stayed in this room, which is also haunted by an ethereal pink man. Nevertheless, no haunting rumors have stopped the hotel from getting glowing reviews.

We finally come to the hotel that started it all, the Stanley Hotel in Estes Park, which tops the list of the most haunted hotels in the world. Since it opened its doors in 1909, the hotel’s renowned whiskey bar and jaw-dropping Georgian architecture drew people from far and wide. But, it reached new levels of (in)famy when Stephen King decided it would be the inspiration for the fictional Overlook Hotel from The Shining. Besides that, the guests have experienced everything from mysterious piano music to maniacal laughs everywhere. You have to appreciate the marketing genius behind the hotel, which has employed its repute cleverly by offering psychic consultations and nightly ghost tours. And if you haven’t experienced anything paranormal of sorts, the staff will surely have many, many stories to share.