Top 10 Things To Do In Sydney 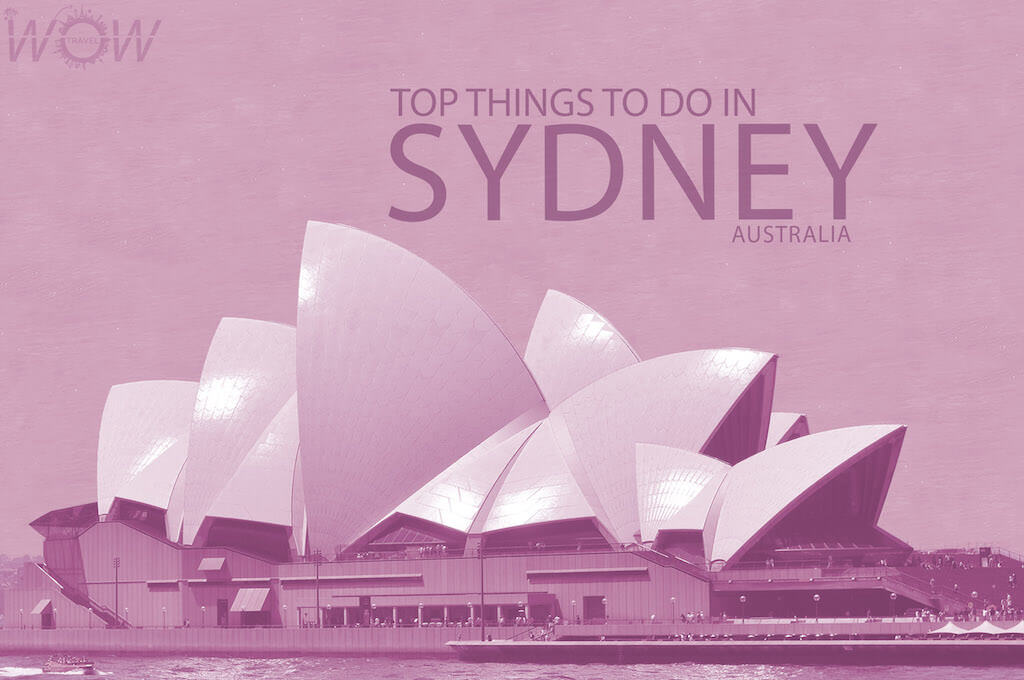 Sydney is the oldest as well as the largest city in Australia. It is one of the most beautiful, cosmopolitan and safe metropolises in the world. There is far more charm and personality to this scenic city than many give her credit for. With a wide range of attractions such as the iconic beaches, delicious cuisine, cheerful music, famous galleries, great museums, wild nightlife and world heritage sites, there is something for everyone. Check out our Top 10 Things To Do In Sydney.

“Sydney is rather like an arrogant lover. When it rains it can deny you its love and you can find it hard to relate to. It’s not a place that’s built to be rainy or cold. But when the sun comes out, it bats its eyelids, it’s glamorous, beautiful, attractive, smart, and it’s very hard to get away from its magnetic pull.” – Baz Luhrmann

“St Mary’s Cathedral stands in the centre of Sydney as a Christian statement of grace and beauty. Generations of artists have bequeathed to it their magnificent gifts in stone and glass, designing a unique space of solace and prayer within this vibrant city. This Cathedral represents the spiritual origins of the Catholic Church in Australia. It is one of Sydney’s most treasured historic buildings and one of the finest examples of English-style gothic churches in the world. William Wilkinson Wardell, the 19th-century architect, dreamed of a gothic structure shaped from the local yellow block sandstone on which this city is built. The building was finally completed 100 years after the architect’s death. The Cathedral is dedicated to Mary Help of Christians.”

While golden sands, turquoise waters and perfect waves make Bondi Beach an iconic Sydney attraction, there is plenty to do beyond the surf. Fine dining, eclectic shopping markets, gorgeous coastal walks and a buzzing nightlife can all be experienced in Bondi.

Explore Sydney’s colorful convict history in the Rocks, the harborside quarter where settlement began. There aren’t many places like The Rocks. Framed by the diamond-sparkled waters of Sydney Harbour and shaped by history, The Rocks is the harbourside quarter where settlement began, it is a historic area that was once home to the Gadigal aboriginal people and later became the country’s first site of European settlement. Today, more than 100 heritage sites and buildings jostle along the narrow streets including Sydney’s oldest surviving house, Cadman’s cottage, built in 1816. It’s also a place for now with chic restaurants, stylish bars, hearty pubs & eclectic shopping.

Sydney Harbour is probably the most beautiful and the largest natural harbour in the world. From its working docklands to its pristine and secluded beaches, this harbour is a natural asset that most cities can only dream. Many recreational events are based on or around the harbour itself particularly the Sydney New Year’s Eve celebrations and the starting point of the Sydney to Hobart yacht race.

Sydney is home to the world’s largest and most varied fish market, second only to Tokyo’s. Shop, eat, learn and experience in the Fish Market. Australia’s home of seafood with expert advice and the widest range of the finest quality Australian seafood and fantastic specialty retailers.

The Sydney Harbor Bridge is one of Australia’s most well known and photographed landmarks. It is the world’s largest (but not the longest) steel arch bridge with the top of the bridge standing 134 metres (440 ft) above the harbour. It is fondly known by the locals as the ‘Coathanger’ because of its arch-based design. We recommend you to climb The Harbour Bridge, it is easier than it first appears as the gradient leading to the top of the bridge is not that steep.

The Royal Botanic Garden, Sydney, is a place of natural beauty, where people come for peace, relaxation, education, and to learn more about plants and horticulture. Entry to the gardens is free. and open every 7 days a week.

“King’s Cross has for a long time been known to most Australians as the drugs and red light capital of Australia. Most Australians who have visited Sydney at one time or another have wandered through the Cross, if only for a look at how the “other half” live and play. In recent years, however, this sleazy pocket of Sydney has started to evolve, albeit ever so slowly, into a richly vibrant part of the city. The strip clubs, topless waitresses, adult bookshops and tacky nightclubs are still there, but small, trendy cafes have sprung up on the fringes of the Cross that are attracting a different type of visitor. The Cross is most sleazy at night when the bright lights come on and the action hots up. During the day it can look a lot less threatening”. Source: Sydney.com.au

Taronga Zoo is the city zoo of Sydney and is located on the shores of Sydney Harbour. It was officially opened on 7 October 1916. With over 4,000 animals, over 20 keeper talks and shows a day, tours, events & concerts, there is always a new reason to visit Taronga Zoo.