Top 10 Things To Do In Kuala Lumpur 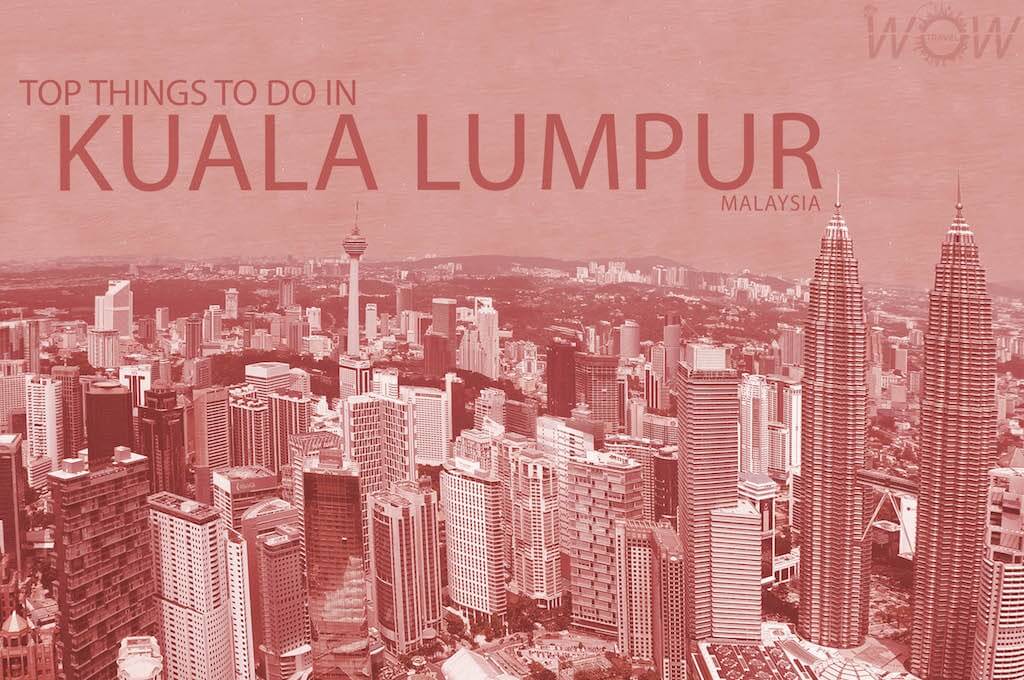 Kuala Lumpur, or KL as locals call it, had a very humble beginning. It was founded by Chinese tin miners in 1857 who were brought to work at the confluence of Gombak River and Klang River, so they called it Kuala Lumpur which in Malay means “muddy confluhoence”. The days of tin and mud are over, Kuala Lumpur is today an example of teamwork and effort which is reflected everywhere you look. Malaysian people’s ambition and resourcefulness drove this city to become a modern metropolis. A symbol of this success is without a doubt the world-famous Petronas Towers, which are visited by thousands of tourists and businessmen who travel to this Southeast Asian monster annually. “Klites”  are always nice, amiable, happy, and smiling, they are always eager to help you find your next attraction on the map. Food is an important factor in every trip and Malaysian cuisine is delicious and resourceful, Malaysians have a knack for creating delicious food from the simplest of ingredients.

Kuala Lumpur has a vigorous mix of Malay, Chinese, and Indian ethnicities; a powerful interplay of religions, including Islam, Buddhism, and Hinduism; and a well-built appreciation for good life so in other words come ready to fall in love with KL. Take a look at WOW Travel’s Top 10 Things To Do In  Kuala Lumpur.

A quick elevator ride up you are on top of South East Asia. Through a special through a state-of-the-art display and vibrant exhibits visitors can learn how this colossal structure was designed and constructed. Take a walk on the world’s highest double-decked bridge which symbolizes a gateway to the future and provides a stunning view of Kuala Lumpur. Even to see the towers from the outside is a show itself, the Towers feature multi-faceted walls of 33,000 stainless steel and 55,000 glass panels with light filtering and noise reduction properties, the glass is covered by stainless steel visors to further protect visitors from the tropical sun. They were the tallest buildings in the world from 1998 to 2004 and remain the tallest twin towers in the world.

The limestone, material of which the Batu Caves are made of dates back 400 million years old. These caves were used as shelters by the indigenous Temuan people but nowadays they are the most popular Hindu shrines outside India dedicated to Lord Murugan. It is the focal point of Hindu festival of Thaipusam in Malaysia. It is only 13 kilometers (8 miles) north of Kuala Lumpur. To reach the 3 main temples visitors must go up 272 steps. At the base of the hill are two more cave temples, Art Gallery Cave and Museum Cave, both of which are full of Hindu statues and paintings. A 42.7m (140 ft) high statue of Lord Murugan was unveiled in January 2006, having taken 3 years to construct. It is the tallest Lord Murugan statue in the world. Oh and watch out for the Long tailed-macaque monkeys, they love peanuts, but they love any other food as well. These staircases are one of The World’s Scariest Stairs.

This is the 5th Avenue  & Broadway of KL, it is the shopping and entertainment district of Kuala Lumpur. This district is most distinguished one in the city, home to many landmark shopping centers, cafés, bars, night markets, as well as hawker-type eateries. This area is popular among tourists and locals, especially among the youths Many major nightlife events take place here such as the New Year’s countdown, Merdeka eve celebrations, street concerts and parties. Due to its central location, it is fairly easy to get to Bukit Bintang from anywhere in Kuala Lumpur via public transportation.

This tower is used for communication purposes and features an antenna that reaches 421 meters (1,381 ft)  also known as the 7th tallest freestanding tower in the world. The rest of the tower below has a stairwell and an elevator to reach the upper area, which also contains a revolving restaurant, providing diners with a panoramic view of the city. They began its construction in 1991 and finally opened to public on 23rd July 1996. The main Dome at the Lobby Entrance and Exits of the Upper Ground Floor is clad in glass. It resembles the inner surface of a huge diamond, with sparkling multispheres arranged in the traditional Islamic ‘Muqarnas’ form. This Esfahan designs forms larger brusque patterns at the bottom to symbolize the 7 layers of the sky.

It took 2 years to built between 2003 and 2005  and it is an oceanarium located beneath Kuala Lumpur Convention Center. It houses over 250 different species and over 5,000 land and aquatic animals from Malaysia and around the world. From exploring exotic tropical waters to wading through steamy rainforests, Aquaria KLCC takes you on a spellbinding journey of discovery. Experience first-hand a fascinating world teeming with life and learn more about their habitat and way of life. Learn about Electric Eel, Electric Catfish and the Elephant-Nose fish or the freshwater Alligator-Snapping Turtles and the Asian Small-Clawed Otters. A place for adults and kids alike.

A true eco-tourism attraction in the heart a huge metropolis. The KL Bird Park is within the serene and scenic Kuala Lumpur Lake Gardens, a quick 10-minute drive from the city center. It is home to more than 3,000 birds of approximately 200 species of local and foreign birds. The Kuala Lumpur Bird Park has earned a reputation among those who are keen on the study of birds in their natural habitat, birdwatchers and scientist from all over the world visit this wonderful oasis of life. KL Bird Park is also reputed to be the largest walk-in free-flight aviary in the world.

This temple is fascinating due to the fusion of elements of Buddhism, Taoism and Confucianism. It is  monumental structure displays a harmonious combination of modern architectural techniques and authentic traditional design featuring imposing pillars, spectacular roofs, ornate carvings and intricate embellishments. This six-tiered Chinese temple is one of Kuala Lumpur’s most important landmarks. The temple is set amongst rocks and waterfalls where  people kneel and receive a blessing of water from the statues. Outside the temple visitors can find a Chinese Medicinal Herbs Garden, a Wishing Well as well as a Tortoise Pond.

One of the most popular mosques in the city due to its central location and its proximity to the KLCC shopping center and the Petronas Twin Towers. This religious building was so popular that they had to renovate it to increase the capacity from 6000 people to 12,000 people. The mosque is an architectural landmark of Islam sometimes referred as the jewel of Kuala Lumpur.

This magnificent palace was once the residence of the Supreme King of Malaysia, now converted into the Royal Museum. It is situated in a privileged position on the slope of a hill overlooking the Klang River.  It was replaced by the new palace as the official residence of the King in 2011.

Among Kuala Lumpur’s earliest Moorish-style buildings, the Sultan Abdul Samad Building is a distinguished city landmark that originally served as the secretariat for the colonial British administration, built in 1897. Today it is home to the offices of the Ministry of Information, Communications and Culture of Malaysia. This building is usually the backdrop for Malaysia’s annual Independence Day parades.