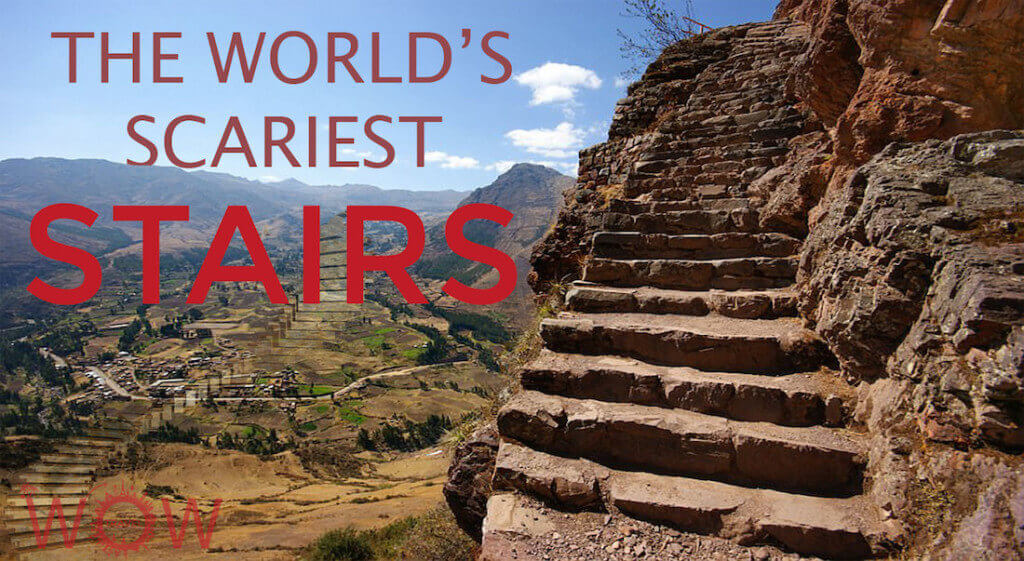 There is one thing in common among the world’s most treacherous staircases: all of them require nerves of steel. Stairways can leave just as much of an impact on your memory as the places they lead you, especially when they stand between you anda site you flew half way across the world to experience. WOW Travel shares with you the world’s scariest stairs.

It takes guts just to reach the starting point of the world’s tallest and fastest water slide, opened in 2014. You’ve got to climb the 265 steps that snake up the in order to get to the top.

Rising almost 100 meter (328 ft) above the ground, the Batu Caves temple complex in Malaysia consists of three main caves and a few smaller ones. To reach the biggest one, Temple Cave, visitors must climb a steep flight of 272 steps.

Norway’s Flørli Power Station is the starting point for the best hikes around the town of Lysefjord—and its stairs will make you gasp for two reasons. First, there are 4,444 steps that ascend a staggering 740 meters (2,427ft) from the bottom. Second, it is the longest staircase in the world made entirely out of wood, meaning you should be paying close attention to each mysterious creak.

The Statue of Liberty was a gift of friendship from the people of France to the United States and is recognized as a universal symbol of freedom and democracy. If you want to gaze out from Lady Liberty’s crown, check your claustrophobia at her feet. The platform’s only access is via a cramped, 146-step double-helix spiral staircase with just 6 feet of head clearance, and it’s teeming with tourists. Real troopers, however, will make the entire tight 377-step hike up all the way from the lobby, the equivalent of climbing a 20-story building.

While the Janssen Observatory in France doesn’t look scary at first glance, consider that this outdoor staircase is at the summit of the tallest mountain in the Alps.

In this super-humid hotbox of Buddhist history, there’s no shame in bowing down on your hands and knees or pulling yourself up with the provided ropes to scale the nearly 70 percent inclined stairs of Angkor Wat’s uppermost temples. Guides claim the steps were made to be so steep to remind people that heaven was hard to reach.

At first it’s lovely to notice that the staircase adjacent to these waterfalls was designed to blend in with the tropical landscape. The stairs are made of smooth, oversize pebbles that provide little traction, and when you’re looking down, they blend together, creating an optical illusion of a stone slide. They’re also slippery from the constant mist from the falls and even though there’s a metal railing to save you from any spills, but don’t count on that too much.

Just looking at these stairs is enough to give anyone vertigo, but they are expected to attract thousands of tourists in China. The 122 meters (300ft) spiral staircase has been installed on the wall of the Taihang Mountains in Linzhou to offer the thrill of mountaineering without the danger. But senior climbers beware, you have to be under 60 to be allowed on the staircase.

To visit the Moon Temple at Machu Picchu, you must ascend the Inca Stairs – an additional 183 meter (600ft) of rocks. The park limits the climb to the first 400 visitors each morning and has added some metallic chains in the worst parts, so hold on because on one side is a sheer, damp wall and on the other, a straight drop into the Urubamba river.

There is only one thing separates between you and the most iconic peak in Yosemite Valley, 11km (7 mile) (one-way) all-incline hike through the wilderness that culminates with climbing up the rock face along a cable ladder for more than 400 vertical feet. From the summit, you’ll take in panoramic views of Yosemite Valley and the High Sierra.