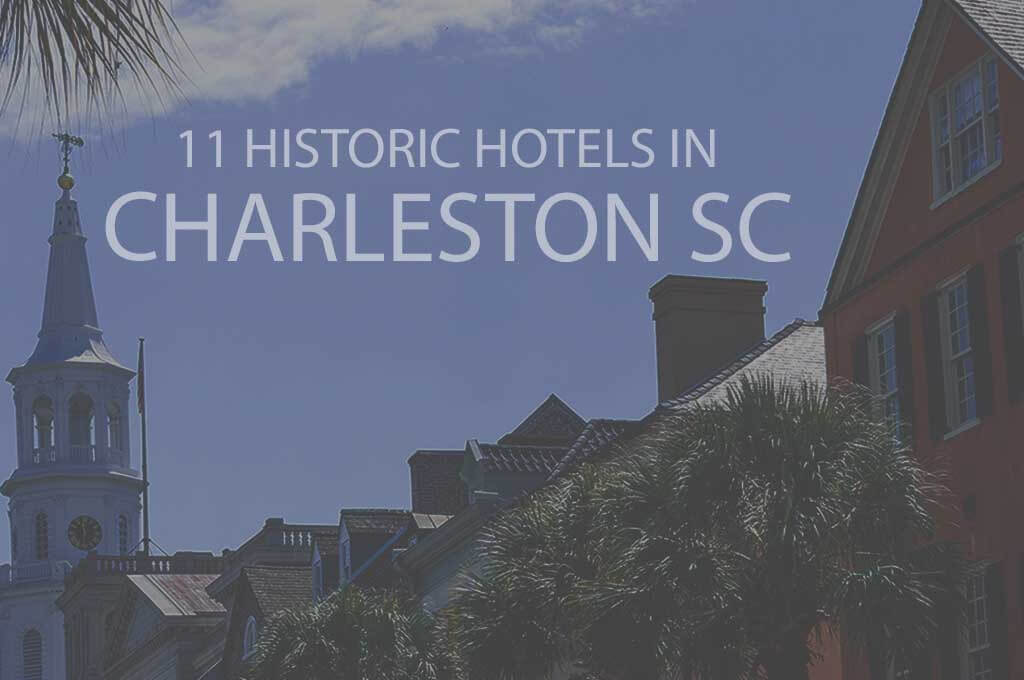 Founded in 1670, the city moved from its original site in 1680. It rapidly expanded to become one of the biggest cities in the United States. You can be sure that there are many things to do in Charleston, South Carolina, to keep you busy. Apart from sightseeing, the city also has a rich culinary scene. Foodies will undoubtedly be in their element in this city.

South Carolina’s only Relais & Chateaux Hotel, the historic Planters Inn, impresses its layout and features. In existence since 1844, the hotel stands tall among the Charleston, South Carolina, historic hotels. It enjoys a prime location at the corner of Market & Meeting Street in Historic Charleston.

In 1803 the original Planters Inn opened with a promise to accommodate country gentlemen and their families with full boarding and lodging. It was an instant hit and attracted many. Later acquired by an enterprising woman, she wasted no expenses upgrading the hotel to an upscale Charleston hotel. Her focus was to ensure the hotel was good enough for gentlemen planters from the country and the Charleston locals.

This historic hotel in Charleston, SC, stands out today for its palmetto-shaded courtyard, spacious guest rooms, and sweeping piazzas. Other notable features of the hotel include soaring ceilings, heart pine floors, stunning antiques, and working fireplaces.

It’s safe to say that many of the historic hotels downtown Charleston, SC impress with their elegance and special touch. Zero George Street stands out as one of the best hotels in Charleston. You can look forward to some excellent service here combined with tastefully appointed guest rooms. The immaculately restored circa 1804 buildings and the private courtyard is a welcoming respite.

Charleston’s only “art hotel,” The Vendue, straddles two buildings that once served as warehouses. The two unique Charleston, South Carolina historic hotels, 19 Vendue and 26 Vendue, have merged several historic warehouses from the 18th and 19th centuries to create a unique space. It stands out as a historic hotel in Charleston, SC, with a difference.

Given the nature of the buildings, no two rooms are alike. All 84 rooms showcase different period reproduction furnishings or genuine antiques to make you feel like a step back in time.

In 2014, The Vendue underwent a huge facelift to emerge as Charleston’s first and only hotel dedicated to the arts. Throughout the hotel, you can marvel at some excellent pieces of art. 19 Vendue is where you will see most of the art installations that cover all the public spaces.

The Indigo Inn had an interesting beginning as an inventory warehouse to store indigo dye, hence the name. Once the foundation of the Charleston textile industry, the buildings that stood on 226-228 Meeting Street were demolished. Only the Victorian-style cast-iron facade ornamentation remained.

The property was later occupied by various tenants until Frances F. Limehouse bought it in 1979. Extensive renovations carried out by the new owner transformed the property into a luxury hotel. The inn holds the distinction of being one of the historic hotels downtown Charleston SC to spark the modern restoration movement.

Currently, the inn is an intimate space in the heart of downtown Charleston. It offers elegant, comfortable guest rooms, many of which overlook the hotel’s vibrant, European-style central atrium.

The epitome of Southern style and comfort, the historic Mills House Wyndham Grand Hotel is another standout among the historic hotels downtown Charleston SC. Built by a local grain merchant Otis Mills, the original hotel dates back to 1853. It stood strong for several years, surviving even the Civil War.

Later renamed the St. John Hotel, the hotel even played host to President Theodore Roosevelt in 1902. The opening of newer hotels saw the sad decline of the Mills Hotel, which was finally sold at an auction in 1968.

Although the new owners hoped to restore the historic hotel, it was not possible. The original hotel was pulled down, but the ironwork and cornices were saved. In 1970, a replica of the original hotel opened as The Mills Hyatt House. However, in 1983, it joined the Holiday Inn Chain. After three decades under the Holiday Inn banner, the hotel finally became part of the Wyndham chain. Ornate architecture and timeless fixtures are a reminder of the hotel’s glorious past. Despite its history, the hotel is among the best hotels with pools in Charleston.

A hidden gem tucked away in a quiet secluded area, just steps from King Street, the historic Fulton Lane Inn comes as a pleasant surprise. Originally built for the YWCA in 1889, the charming inn went through a few transitions to become what it is today.

A three-story building with an elaborate facade of red brick and sandstone and a swimming pool on the first floor debuted during the height of the Gilded Age. A second structure created in 1912 also opened with much fanfare. The three-story building of pressed brick with granite trim and a yellow brick facade was built for a tailoring business. However, the two buildings eventually became apartment complexes in the 20th century.

After serving as apartments for a few years, the complex underwent a complete renovation. Modern amenities were added, and in 2008 the buildings were interconnected to create an elegant space.

Standing out amongst the historic hotels downtown Charleston, the Francis Marion is the grand dame of historic Charleston hotels. Named after the Revolutionary War hero Francis Marion, the hotel opened as one of the largest and grandest hotels in the Carolinas in 1924. In 1952, the hotel became the first fully air-conditioned hotel in Charleston.

As part of the Jar Tar Hotels Corp, between 1955-1956, the hotel underwent a major renovation. The Swamp Fox Room and ground floor restaurant were added during this refurbishment. The hotel enjoyed a few outstanding years, but by the mid-1970s, the hotel’s popularity began to decline.

After several failed attempts to restore the hotel, the Francis Marion finally received a much-needed facelift in 1996. This earned it a National Trust for Historic Preservation award.

Many historic hotels downtown Charleston SC, like the John Rutledge House Inn, were former homes of prominent citizens. John Rutledge, a signer of the American constitution, built the house in 1763. George Washington was even entertained in this very house in 1791!

Since its construction, the house has seen quite a few calamities from an earthquake, fire, and a Union cannon fire. However, it has continued to stand tall. A renovation in 1989 transformed the house into the John Rutledge House Inn.

Occupying one of the oldest buildings on King Street, Kings Courtyard Inn is another example of a classy historic hotel in Charleston, SC. Built in the Greek revival style accented by Egyptian architectural detailing, the hotel traces its roots to 1853.

The Blum Building, as it was originally called, housed shops on the first floor and hotel rooms on the second and third floors. After the Civil War, with a change in the Southern economy, the building underwent a drastic change. From being a Salvation Army for women to dry cleaners and even a skating rink, the building donned several hats.

A complete renovation of the building in 1983 created two courtyards with surrounding rooms. Modern bathrooms were added, and windows and floors were redone to add character to the space.

The Dewberry may not have had its origins as a hotel, but the building’s rich history pushes it up the rankings of Charleston, South Carolina, historic hotels. The brick and marble buildings opened as government offices in 1963.

Originally named the L. Mendel Rivers Federal building, it suffered serious damage in 1999 during Hurricane Floyd. It was later acquired by owner John Dewberry who spent eight years transforming the building into his vision of “Southern Reimagined.”

Among the historic hotels downtown Charleston SC, the Dewberry is probably one of the more contemporary hotels. However, it doffs its hat to traditional Charleston with a walled courtyard and artwork by noted local or South Carolina artists. A thoughtful blend of the past and present adds a touch of elegance to the hotel.

Once the home of a wealthy cotton merchant, Wentworth Mansion is a unique historic hotel in Charleston, SC, that dates back to 1886. It stands out for its Second-Empire style architecture with an ornate mansard roof crowned with a cupola. After being in the family’s possession for over three decades, the home was sold to the Scottish Rite Cathedral Association in 1920. It then changed ownership once again in 1940 to become the headquarters of The Atlantic Coast Insurance Company until 1996.

A change of ownership in 1997 resulted in a total makeover. An extensive $7 million renovation transformed the building into one of the best Charleston, South Carolina, historic hotels. While the magnificent architectural features of the home have been preserved, modern conveniences blend in. You can look forward to inlaid floors, the original staircase, and Tiffany glass.

The 21-room hotel pays tribute to Charleston’s gilded age. Italian crystal chandeliers, hand-carved marble fireplaces, and Tiffany stained glass exude luxury and elegance. To top it off. The hotel is an easy stroll from King Street’s world-class dining and shopping.