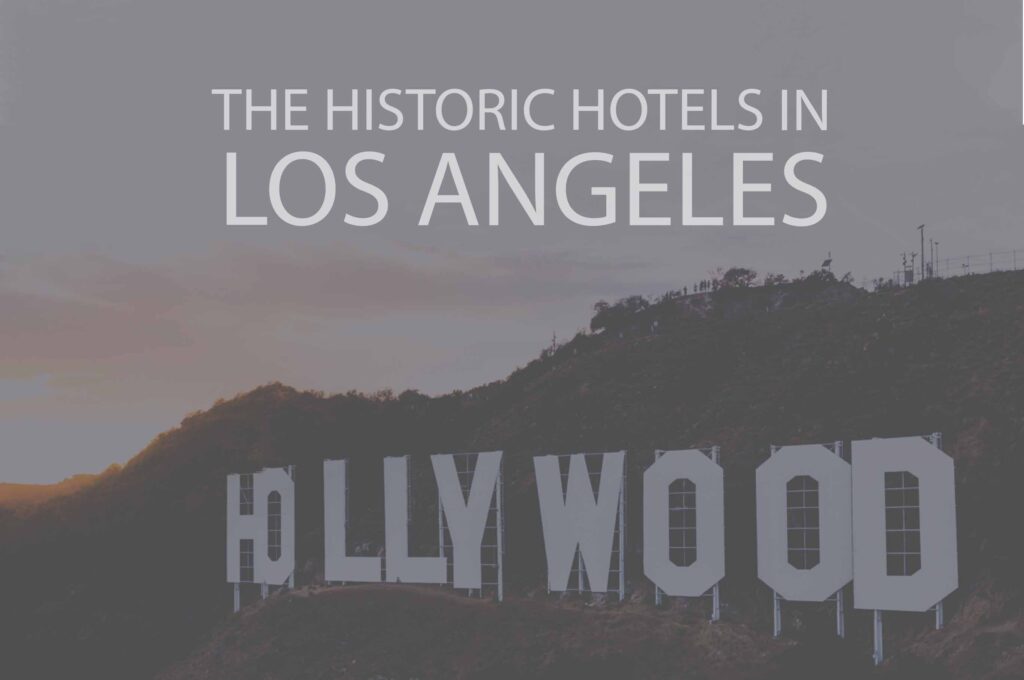 Welcome to sunny Los Angeles! When talking about Los Angeles, you’ll probably think of the Lakers, Rodeo Drive, and Hollywood. However, there’s so much more than what meets the eye! You might now always associate the glitzy Los Angeles with historic hotels. However, it’s truly rich in history and home to countless establishments that have been open for more than a century. If the walls could talk, you can only imagine the tales they’d tell about the famous and iconic guests that have stayed at the historic hotels. This is why we want to recommend you to stay at a historic hotel in Los Angeles! Don’t worry, as we’ve prepared some amazing recommendations. They’re where Marilyn Monroe and The Beatles have spent their nights! Keep reading to learn more about them!

Do you plan to visit Los Angeles with your big family or group of friends? If that’s the case, you may want to check out these top villas in Los Angeles instead, as they provide more space for everyone.

Kicking off this list is Fairmont Miramar Hotel & Bungalows, a reputable history hotel in Los Angeles that has been an LA icon for over 100 years. Combining historic elegance and luxury with modern comfort, this hotel debuted in 1921. The Great Depression then put a hold on plans to expand the hotel, and it was sold in 1932. Throughout the years, the hotel has changed hands several times. Amazingly, it still manages to be one of the most popular accommodation options until now.

In 2021, this luxury hotel in Los Angeles celebrated its 100th anniversary. Thus, it introduced new food and beverage outlets. Overlooking Santa Monica Beach, this hotel is literally only a stone’s throw away from some of the area’s top attractions. They include Santa Monica Pier and the 3rd Street Promenade, which is loved for its live entertainment, shopping centers, weekly farmers market, and eateries.

Featuring Art Deco touches and stunning views of the ocean, Casa Del Mar is one of the most beloved hotels in Los Angeles. As a Historic Hotels of America member since 2019, this hotel debuted in 1926. When this historic hotel in Los Angeles first opened, it was one of the most sought-after beach resorts in the city. Locals and travelers alike flocked to this hotel to experience its fine amenities and top-notch services. Some Hollywood celebrities were even regulars at this hotel, including Clark Gable, Greta Garbo, and Rudolf Friml.

Unfortunately, following World War II, the hotel struggled a lot and was closed in the early 1960s. Thankfully, after being renovated, the hotel was reopened in 1999. It’s now the last remaining icon in the city from the historical golden age. Those who want to experience celebrity treatments and world-class service won’t be disappointed by this high-end hotel.

Originally named Beverly Wilshire Apartment Hotel, this historic hotel in Los Angeles was built in 1928 by Walter G. McCarty. Then, in 1940, the hotel was renamed to Beverly Wilshire after being renovated. It resulted in the addition of a huge ballroom, an Olympic-sized pool, and professional-sized tennis courts. Because of its luxury amenities, many moguls and elites decided to spend their nights there.

Thanks to its prime location that overlooks the one-and-only Rodeo Drive, this hotel has also been the filming location for many movies, like the 1990 film “Pretty Woman.” Until 2022, the hotel has undergone countless renovations. Now, it offers hints of old Hollywood glamour with a modern twist. Travelers love staying here thanks to the hotel’s fancy amenities and well-appointed guestrooms.

We have yet another historic hotel in Los Angeles built in the 1920s! Originally a YMCA, Hotel Figueroa boasts a rich history in the women’s movement in LA. It was the biggest commercial building ever funded by women for women. It was a haven for solo female travelers who were unable to check into most hotels without a male chaperone at the time. Thanks to this hotel, women were finally allowed to live in a supportive environment without restrictions.

This Los Angeles hotel then fully embraced its social conscience, staging political protests and news conferences against sexism, racism, and other social issues. Today, it’s among the most popular hotels in downtown Los Angeles. Staying here allows guests to be just moments away from STAPLES Center and L.A. LIVE, making it a really attractive option for not just women but any kind of traveler.

The Beverly Hills Hotel – Dorchester Collection is a great addition to this list. Also known as the “Pink Palace,” this historic hotel in Los Angeles won’t disappoint you. This hotel was opened in 1912, which was before the city even existed! It was built to accommodate those who want to stay for a while as they’re looking for properties to buy. Then, in 1948, the hotel was painted its distinctive pink to complement the sunset.

In addition to that, this Los Angeles historic hotel has housed multiple popular names, including the Beatles, Elizabeth Taylor, Greta Garbo, and Hunter S. Thompson. In 2012, the hotel celebrated its 100th anniversary and was named the first historic landmark in Beverly Hills. Today, it’s a luxurious hotel that features some of the most lavish facilities, like an Olympic-sized pool and opulent suites.

The Hollywood Roosevelt is one of the most celebrated buildings along Hollywood Boulevard. Dating back to 1927, this historic hotel in Los Angeles has been one of the city’s most premium holiday destinations for over a century! When the hotel first opened, guests were awed by its fine Spanish Colonial Revival-style architecture. In fact, no other hotels in the city at that time were that luxurious. When it comes to its name, the hotel is paying homage to former US President Theodore Roosevelt.

Throughout the years, this hotel has welcomed countless big names. Marylin Monroe, Clarke Gable, and Carole Lombard are just a few that have spent their nights here. However, the hotel’s biggest connection to Hollywood was its role as the host of the very first Academy Awards! Today, this hotel is among the most recognizable buildings in downtown Hollywood. It’s loved by many as it’s only a short distance away from famous sites like the Walk of Fame and Dolby Theater.

Up next is Hotel Normandie – Los Angeles, a nearly 100-year-old hotel that was built back in 1926. This hotel is set in the bustling Koreatown – Wilshire Center District. It began welcoming guests in 1926, and the building was designed by architects Walker & Eisen. Like many other historic hotels, this historic hotel in Los Angeles has had its highs and lows. Then, in 2010, it underwent a huge renovation to return the hotel to its former glory.

After the restoration, skylights, decorated wood beams, original wood doors, and a fireplace that hadn’t been visible for God knows how long were all finally revealed. Today, the 94 spacious guestrooms boast restored hardwood floors, Art Deco bathrooms, and other in-room amenities that’ll make your stay enjoyable.

If you’re searching for a classic historic hotel in Los Angeles, the Millennium Biltmore Los Angeles is unbeatable! This hotel is set in downtown Los Angeles and features a classic luxurious style. This means you’ll never be too far away from the city’s top attractions. Originally known as the Los Angeles Biltmore Hotel in 1923, this hotel easily became one of the city’s most popular hotels after its opening. During its grand opening, around 3,000 people were there for the party.

During the hotel’s first year, it was already used as a shooting location for 1924’s Triumph. Other movies also flock here to shoot their scenes, including Ocean’s 11, The Sting, Chinatown, and Mad Men. Even Taylor Swift had the opportunity to dance on the hotel’s reception desks when she was filming her “Delicate” music video! If you want to live your life like a star for a few days, you should stay at this Los Angeles historic hotel!

Another Los Angeles historic hotel that’s worth your consideration is Fairmont Century Plaza, Los Angeles. The building is set on what used to be the backlot of 20th Century Fox Studios. In 1961, the studio was purchased, and construction of the hotel began shortly thereafter. Finally, in the year 1966, the hotel was finished, and upon opening, it quickly rose to the top and was loved because of its elegance and luxury. Originally deemed “The Hotel of the Future,” it has also accommodated Hollywood stars, American presidents, and many other iconic names.

That’s not all, as many big moments in history took place in the hotel’s ballroom. We’re talking about events like the Emmys, the Grammys, and even presidential state dinners! This historic hotel in Los Angeles was also called the “Western White House.” That’s because President Reagan loves this West Coast hotel! Today, this hotel remains one of the most luxurious hotels in sunny LA.

Calling all beachgoers! If you want to stay at a historic hotel in Los Angeles that’s only steps away from the beach, the Georgian Hotel should be your go-to option! This beautiful boutique hotel in Los Angeles is only around a two-minute walk away from the beach. Grab your sunscreen and sun hat, and hit the beach! When it comes to its history, the building built in 1933 was the vision of Harry J. Borde. Back in the day, it was one of the first skyscrapers that were built along Santa Monica’s Ocean Avenue.

This Los Angeles historic hotel has attracted countless Hollywood elites, featuring Romanesque Revival and Art Deco architecture. It was also called “The Lady,” honoring Borde’s mother, Rosamond Borde, who opened another hotel on the nearby lot. Throughout the years, the hotel has been renovated multiple times and was given modern conveniences.

When it comes to the best historic hotel in Los Angeles, The Charlie West Hollywood takes the cake. As you can guess from its name, this hotel was once home to the legendary Charlie Chaplin. Previously The Farm, this hotel was built in 1924 by Elizabeth Gordon. Later, the building was purchased by Chaplin. After that, he sold the property in the late 1940s because it didn’t do so well. Fast forward to 2002, a real estate developer and entrepreneur decided to bring back this hidden gem to life!

What’s unique about this Los Angeles historic hotel is that each suite is named after the celebrity who once stayed there. Apart from that, many also adore this hotel because of its ambiance. The fresh flowers and plants are refreshing, and there are many outdoor spaces for guests to relax. Best of all, it’s less than a mile (1.6 km) away from Sunset Boulevard, which is where you’ll find some of the area’s best eateries and shops.

Recommended Things To Do in Los Angeles