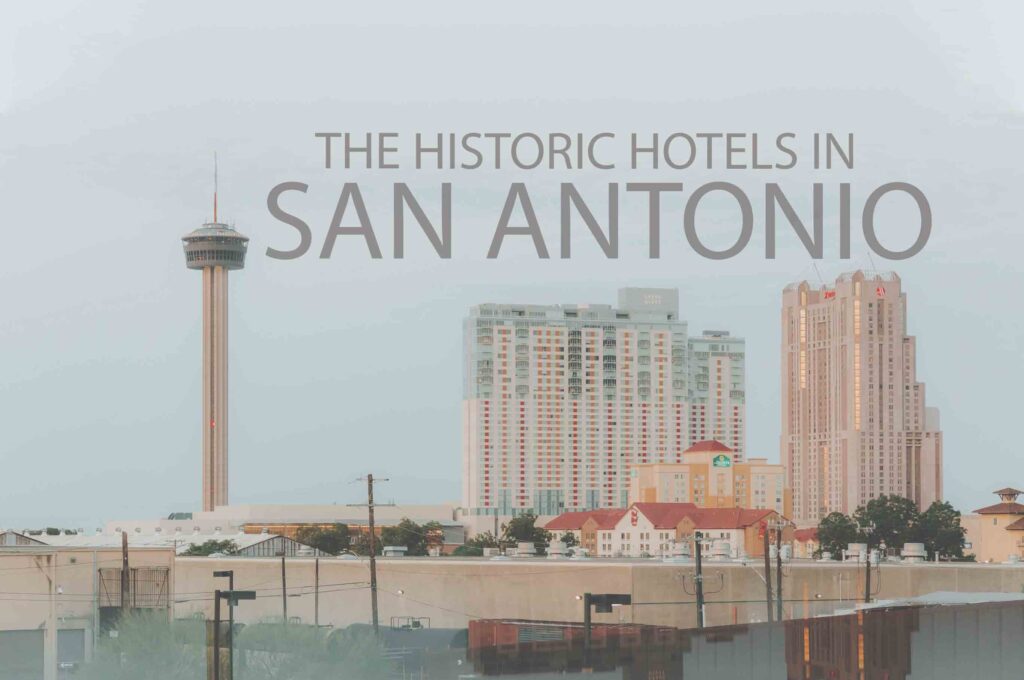 San Antonio is one of the largest cities in Texas. However, it’s much more than that! Home to some of the most well-known historic sites in Texas, it’s also arguably the state’s most culturally and historically rich city. Not to mention, it’s home to the renowned Alamo, which is also listed as a UNESCO World Heritage Site. This city is perfect for sightseeing with so many things to do and explore. But why only visit a historic place if you can stay at one? Yep, we’re here to recommend you to stay at a historic hotel in San Antonio. Many of them lie near Alamo, and they’re close to some of the city’s top attractions. Whether you want to stay at the oldest hotel San Antonio has to offer, or at a haunted one, our list has got you covered!

Inn on the Riverwalk

Situated near the historic King William district, the Inn on the Riverwalk is a 19th-century home that offers a bed and breakfast service to locals and travelers alike. The main house of this inn was built in 1916 and was used as a doctor’s office. Over the years, it has been many things, from a private residence to an apartment. Then, it was fully renovated in 1990 by A.D. Zucht, D.D.S.

Like the oldest hotel San Antonio has to offer, this historic hotel in San Antonio has changed hands numerous times. It wasn’t until 2014 that the inn started to undergo many renovations to make it a more comfortable accommodation for travelers. Today, it’s a homey option for travelers that don’t want to stay in a fancy hotel. Staying here will make you feel like you’re in a quiet area despite being close to some of the city’s top attractions.

Set in the iconic Riverwalk is Drury Plaza Hotel San Antonio Riverwalk. No, it’s not the oldest hotel in San Antonio, Texas, but it is a historic hotel in San Antonio. With easy access to some of the city’s most popular restaurants and shops, the hotel is housed inside the historic Alamo National Bank Building. The building was completed in 1929 and added to the National Register of Historic Places in 2005. Two years later, the hotel opened its doors.

With Art Deco ornamentation and Beaux-Arts principles, this 24-story skyscraper was a masterpiece at that time and has been a landmark in the San Antonio skyline until today. In the lobby, you can still find the same chandeliers that hung in the 1920s. Today, this modern hotel boasts all of the conveniences you need, including a rooftop pool and observation deck.

Up next is The Emily Morgan San Antonio, a historic hotel in San Antonio. No, it isn’t the oldest hotel San Antonio has to offer. However, it’s one of the most popular ones. Despite that, the hotel didn’t become the famed hotel it’s today until the year 1984. It was originally a Medical Arts Building. The Gothic revival influenced the thirteen-story building and features pieces of cast iron and unique ornamentation.

Then, since it began operating as a hotel, it has been providing upscale accommodations and top-notch services for travelers. Those near and far come to the hotel to admire its jaw-dropping architecture. In 2012, this pet-friendly hotel in San Antonio joined the DoubleTree by the Hilton family. The hotel was inducted into the Historic Hotels of America three years later!

Hotel Emma at Pearl on the Riverwalk

Originally built in 1894 as Pearl’s Brewhouse, Hotel Emma at Pearl on the Riverwalk has been a San Antonio landmark for a long time. A stay at this historic hotel in San Antonio will allow you to relax in a historical atmosphere and be treated to nice food and pure luxury. The hotel was designed by August Maritzen, a Chicago architect, in the Second Empire style. The hotel was named after Emma Koehler, who ran the brewery for almost 20 years. Here’s a big surprise: she wasn’t the only Emma! In 1910, Emma Koehler (the original Emma) was involved in a car accident, and her husband hired a nurse to take care of his wife. The nurse was also called Emma, who eventually became his mistress.

However, Emma, the nurse, would then complain she had too much to do, resulting in Otto hiring a second nurse, also called Emma! As you can imagine, everything was super complicated. Fast forward, Otto was shot dead in 1914 by Emma, the second nurse. However, she wasn’t found guilty, and Emma, the first nurse, left the brewery. Considering Emmas’ stories, it’s only fitting for this San Antonio historic hotel to be named after them!

A member of Historic Hotels of America since 2010 is Omni La Mansion del Rio. While it isn’t the oldest hotel San Antonio has to offer, it’s rich in history. Set along the historic River Walk, this hotel was once a school. In 1966, two of the former students bought the building and turned it into a hotel. In 1968, this San Antonio historic hotel opened its doors as a luxury hotel named La Mansion del Rio.

Then, in 2005, Omni Hotels acquired this accommodation, hence the name. Listed as a historical treasure by the Texas Historical Commission, this hotel now offers 338 spacious guestrooms and suites. They’re fitted in warm earth tones and oversized furnishings, taking you back in time.

With over 100 years of history, Hotel Gibbs Downtown Riverwalk is for sure another historic hotel in San Antonio that’s worth considering. Built in 1909 as the city’s first high-rise office, this charming property has transformed into a lavish and modern boutique hotel while maintaining its original characteristics. When you walk into the hotel, you’ll immediately feel its old-world ambiance. Located on the grounds of the original Alamo compound, this hotel isn’t just one of the most historically significant hotels but also one of the most haunted ones!

When the hotel was constructed, two cannons that were used during the Battle of the Alamo were found. Then, they were removed and placed in museums. But after that, the number of ghostly encounters in the hotel skyrocketed! Until today, the dead are still said to ride the hotel’s elevator. Many have also seen people dressed from another period in the hallways, floating through the walls, and disappearing through the doors! Though it isn’t the oldest hotel in San Antonio, Texas, it sure is one of the creepiest!

Another great addition to our list is none other than The Crockett Hotel, which is set in the middle of San Antonio, Texas. This historic hotel in San Antonio was built in 1909. It stands near where Davy Crockett and Texas settlers defended the southeast palisade of the Alamo during a 13-day siege in 1836. Then, in 1927, the hotel underwent a vast expansion, adding the seven-story west wing.

Then, many years later, in 1982 to be exact, the hotel was bought by John Blocker in an effort to restore the building’s original architectural details. In 2007, it underwent another complete renovation. Now, staying at this hotel means you’ll be able to spend your nights in a guestroom that invokes the intimacy and elegance of a high-class boutique hotel.

While Hotel Havana isn’t the oldest hotel San Anotonio has to offer, it’s old enough to tell plenty of stories. For those who aren’t familiar with this historic hotel in San Antonio, it’s situated on Museum Ranch, a peaceful section of San Antonio’s River Walk. This hotel was opened in 1914 by a local grocer Edward Franz Melcher. He had the vision to recreate the tropical allure of the hotel’s Caribbean namesake. Throughout the years, it served as a temporary residence for Melcher’s visiting vendors. Then, in 2010, the hotel was reopened under the Bunkhouse Group.

Though this hotel is listed on the National Register of Historic Places, it still manages to maintain its young spirit. With a calm Caribbean vibe and Mediterranean Revival architecture, it’s seen as one of the most authentic hotels in the city. Even better, each guestroom is individually decorated after its restoration, so no two guestrooms are alike. Finally, it’s also seen as one of the most romantic hotels in San Antonio!

Another San Antonio historic hotel that’s set in downtown is Sheraton Gunter Hotel San Antonio. Officially operating since 1909, the eight-story hotel was the biggest building ever built in the city. It was named after its investor, Jot Gunter. Since it first began receiving guests, the hotel quickly became more popular. Fast forward to 1917, a ninth story was added. Again, in 1926, three more stories were added.

In 1989, this historic hotel in San Antonio joined the global network of Sheraton Hotels. At that time, it was the fourth historic hotel in the US to join the organization. Then, after a huge renovation, the hotel was rededicated in 1999. Today, the hotel offers 322 well-appointed guestrooms for travelers. While it’s not the oldest hotel in San Antonio, Texas, it continues to be a popular accommodation option for those visiting the city.

Know what it feels like to stay at a luxury historic hotel in San Antonio by spending your nights at St. Anthony! Set in the heart of downtown San Antonio, the hotel is dubbed the “Waldorf of the Prairie,” as its grandeur rivaled that of the New York hotel. It was founded in 1909 by three cattle ranchers and was designed for ultimate luxury from day one. When it was first opened, each guestroom was equipped with automatic electric lighting, telephones, and other conveniences. And since its construction, it has accommodated many big names, including George Clooney. Unfortunately, some guests decide not to leave the hotel!

Yes, like the oldest hotel San Antonio has to offer, this hotel is said to be haunted! The most irritating inhabitants are probably a young couple who love to squat in empty guestrooms! They’re often found sipping drinks with their arms interlocked and don’t want to be interrupted. Apart from that, the tenth floor, a newer hotel area, is also haunted. Bellmen have heard the sounds of footsteps chasing them, and one staff has even heard a sound of shuffling behind him.

What we have here is the oldest hotel in San Antonio, Texas. In the year 1855, William Menger, a German immigrant to San Antonio, started a brewery that was only a stone’s throw away from the popular Alamo. Being one of Texas’ first breweries, it was easily one of the most popular destinations. In fact, it was so popular that it expanded to become a magnificent, 50-room hotel in 1859 to accommodate visitors.

With its stained glass windows and wrought iron balconies, Menger Hotel immediately gained popularity among those traveling to and through San Antonio. Throughout the years, US presidents, cattle barons, and even a few unsavory characters have visited the hotel and bar. What’s more, Teddy Roosevelt also recruited his Rough Riders inside the bar! Today, this beautiful, historic hotel in San Antonio offers 316 airy rooms close to the Alamo, the San Antonio Riverwalk, and other downtown attractions.

Recommended Things To Do in San Antonio