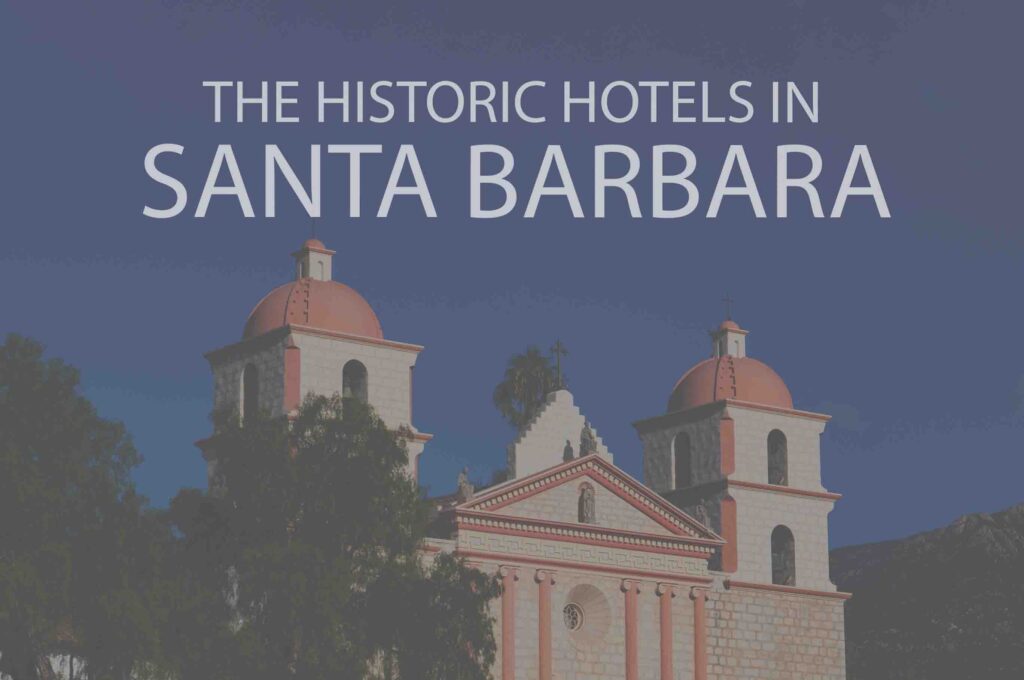 A quintessential beach town, Santa Barbara should be visited by everyone! Santa Barbara will easily excite any kind of traveler, packed with exciting outdoor activities and brimming with countless delicious restaurants. Sandwiched by San Ynez Mountains and the Pacific Ocean, it can be enjoyed by travelers of all ages. But do you know what’s not easy? Finding the best Santa Barbara hotel! However, if you love staying in an old hotel that has lots of stories to tell, we have some recommendations. By staying at a historic hotel in Santa Barbara, you’ll get to know not only the hotel but also the history of the neighborhood it resides in and the city a little bit better. Plus, many Santa Barbara historic hotels are set in the heart of the city, meaning you can still visit some of its top attractions easily. Without further ado, here are our favorites!

Let’s start this list with the Kimpton Canary Hotel, an IHG Hotel! Named one of the best Santa Barbara historic hotels, this property sure has a lot to offer. For those who didn’t know, this hotel is a remodeled version of Hotel Andalucia. Opened in 2004, it was a five-story boutique hotel in downtown Santa Barbara that was renamed Kimpton Canary Hotel. Hotel Andalucia was built for over 30 million USD after its developers decided to destroy the 74-year-old, historic Hotel Carrillo. It was a senior citizen facility that resided on the property.

After an extensive renovation that the Edward Thomas Collection led, the Kimpton Canary Hotel is one of the downtown’s most beloved luxury hotels. It’s a stylish hotel that offers guests everything they need. From a rooftop swimming pool to stunning views, you name it! What’s more, its hard-to-beat location makes it an undeniably popular destination. Also, did you know that this hotel is one of the top pet-friendly hotels in Santa Barbara?

A chic wonderland, the Palihouse Santa Barbara is another historic hotel in Santa Barbara that we adore. Tucked away on the outer border of the historic Presidio District, this discreet hotel is the perfect option for a relaxing vacation. This boutique hotel was originally built in 1920 and was formerly the Santa Barbara School of the Arts. After the school stopped operating, it became the hotel we all love today.

This hotel now boasts 24 homey rooms equipped with all the must-have amenities. What’s more, this hotel is the prime location to experience the intriguing history of the charming neighborhood. It’s only steps away from museums and some of the city’s top architectural landmarks. No wonder it’s seen as one of the best Santa Barbara historic hotels!

What we have here is the Pacifica Suites, another historic hotel in Santa Barbara that’s worth your attention. This beautiful hotel is tucked away in a historic grove of exotic plants and trees. It’s also adjacent to the beautifully restored Sexton House, an architectural relic from the 1880s. Believe it or not, this peaceful hotel is conveniently located near some of the city’s top attractions.

One of the main selling points of this hotel is its atmosphere. Those who prioritize tranquility will definitely love this hotel. The original landowner, Joseph Sexton, bought the property that the hotel now sits on and planted tons of trees on the property. Aside from that, the guestrooms and suites are also to die for. They’re fitted with all the important in-room amenities, and some also offer beautiful poolside views.

The El Encanto, A Belmond Hotel isn’t just one of the best Santa Barbara historic hotels, as it’s also one of the city’s oldest! The story of this hotel started in 1913 when James Warren hired two architects to design a six-residence complex on his property to accommodate the students of the new campus adjacent to the hotel. The school was set to open its new quarters that fall. However, things didn’t go as planned, as only three of the units were rented.

In 1917, Warren designed a huge building that would become the core of a cottage hotel. The cottages that were already on the property were renovated, resulting in the addition of telephones, steam heating, and other modern amenities. In 1929, it had 12 units in total and was expanded yet again in the early 1930s. Frank J. McCoy then purchased it in 1938, and today, it’s one of the city’s oldest hotels that still offer that “enchanted” views of the city, the Rincon, and the Goleta Valley.

Allowing you to stay in the heart of Santa Barbara, the Cheshire Cat Inn & Cottages is one of the most popular Santa Barbara historic hotels. The original property was purchased in 1984 and was later opened as the Chesire Cat Inn a year later. The inn’s theme was very much inspired by the home of the owners, Christine and Jack, in Chesire. It was also partly influenced by Alice in Wonderland! No wonder the inn looks familiarly beautiful!

For more than 30 years, this historic hotel in Santa Barbara has welcomed countless travelers and upgraded itself over and over again. It’s also often booked for family weddings and other events. Today, it includes 14 cozy rooms and 4 cottages, all with the amenities you’ll ever need. Some are even fitted with in-room jacuzzi tubs, private decks, and fireplaces!

Another awesome addition to our list of the top Santa Barbara historic hotels is the Simpson House Inn. As the name implies, this property was built by the Simpson family (not The Simpsons) in 1874. Featuring Italianate Victorian style, it was originally named the Manor House. After its opening, it was painstakingly renovated after 50 years of ownership changes.

In 1992, the house and gardens were named a Historic Landmark! Today, this historic hotel in Santa Barbara still maintains its beautiful Victorian heritage. It includes the Carriage House Suites and English Garden Cottages. It’s beloved by many because of its numerous outdoor spots, offering you endless options for reception and other events.

As one of the best Santa Barbara historic hotels, The Upham Hotel is sure rich in history. This historic hotel in Santa Barbara was built in 1871 by Amasa Lincoln and his family as a New England-style boarding house. It was created to welcome the pioneers who helped create the current Santa Barbara. Then, in 1898, Cyrus Upham bought the Lincoln house and changed its name to Hotel Upham.

Moving on to the year 1982, visionary Carl Johnson took over management of the hotel, preserving the property’s historic character while restoring its original beauty and adding contemporary conveniences. Last year, in 2021, the hotel celebrated its 150th anniversary. As one of the best Santa Barbara historic hotels, it allows you to be just steps away from some of downtown’s best attractions.

Before being a cozy hotel that attracts people to the heart of Santa Barbara, Hotel Virginia Santa Barbara, Tapestry Collection by Hilton, was originally a two-story brick hotel. It was built in 1916 by Charles Maas. In 1925, a third story was added. The construction of this historic hotel in Santa Barbara marked the entry of commercial buildings on Haley Street, where the hotel is located. In 1922, a three-story hotel was built adjacent to the Virginia Hotel. Though separate buildings, they were connected on the upper levels and operated as a single establishment.

After a major earthquake hit the city in 1925, both of the hotels were renovated. However, many decades after the reconstruction, the hotel’s popularity declined, and it deteriorated. Thankfully, Laurie and Marc Recordon bought the property in 1998, giving the hotel a much-needed renovation. The hotel reopened, and many of its original features remain today. As one of the top Santa Barbara historic hotels, it now offers guests modern conveniences and acts as a nice starting point to explore the city.

Mar Monte Hotel, in The Unbound Collection by Hyatt

Mar Monte Hotel, in The Unbound Collection by Hyatt, is currently one of many travelers’ favorite hotels in Santa Barbara. Offering modern conveniences, it promises everyone an enjoyable stay. But who would’ve thought that the hotel we all adore today has so much history? First opened in 1931 as Vista Mar Monte, this historic hotel in Santa Barbara has been a landmark in the city of Santa Barbara since it began welcoming guests. Back then, the hotel had 100 rooms, and every single one had either ocean or mountain views and a bath, and some were made as suites.

Then, in 2011, Hyatt took over the property, which at that time was still called Mar Monte. After that, it was transformed and named the Hyatt Santa Barbara. The hotel was then added to the Hyatt Centric portfolio and branded as a boutique hotel in Santa Barbara. However, the branding didn’t really fit, as the hotel isn’t particularly modern or boutique. It was later renamed Mar Monte Hotel, a hotel offering 200 comfy guestrooms and suites.

Santa Barbara was once like Hollywood. Before moving to Los Angeles, most movie production companies are set in Santa Barbara. Charlie Chaplin, an iconic English comic actor, and filmmaker, fell in love with the city so much that he, along with some investors, built the Montecito Inn in 1928. This historic hotel in Santa Barbara was designed to be a lavish getaway. Soon after it opened its doors, it quickly became one of the city’s most sought-after destinations! It was even called the “cream of the coast” between LA and San Francisco.

Then, in 1943, Chaplin returned to this exact hotel, marrying Oona O’Neill. Since then, many things have happened, but the hotel’s opulence and popularity remain. Today, guests staying at this lavish hotel can expect elegant accommodation options, amazing amenities like spa services, a swimming pool area, on-site dining, and a huge space for events and meetings. Called one of the best Santa Barbara historic hotels, it’s also only moments away from some of California’s best beaches.

This historic hotel in Santa Barbara was a getaway for numerous famous Hollywood stars. Sadly, after World War II, the hotel’s popularity declined, and closed its doors. The hotel then reopened in the late 1960s. In 1975, it was purchased by Rolland and Venetia Jacks. Fast forward to the mid-1990s, the Old Town area, which is the hotel’s location, had improved so much that the owners also decided it was time for the hotel also to have a major upgrade. After that big renovation, the hotel began operating again in 1996 and was reborn as the classic Hotel Santa Barbara.

Recommended Things To Do in Santa Barbara