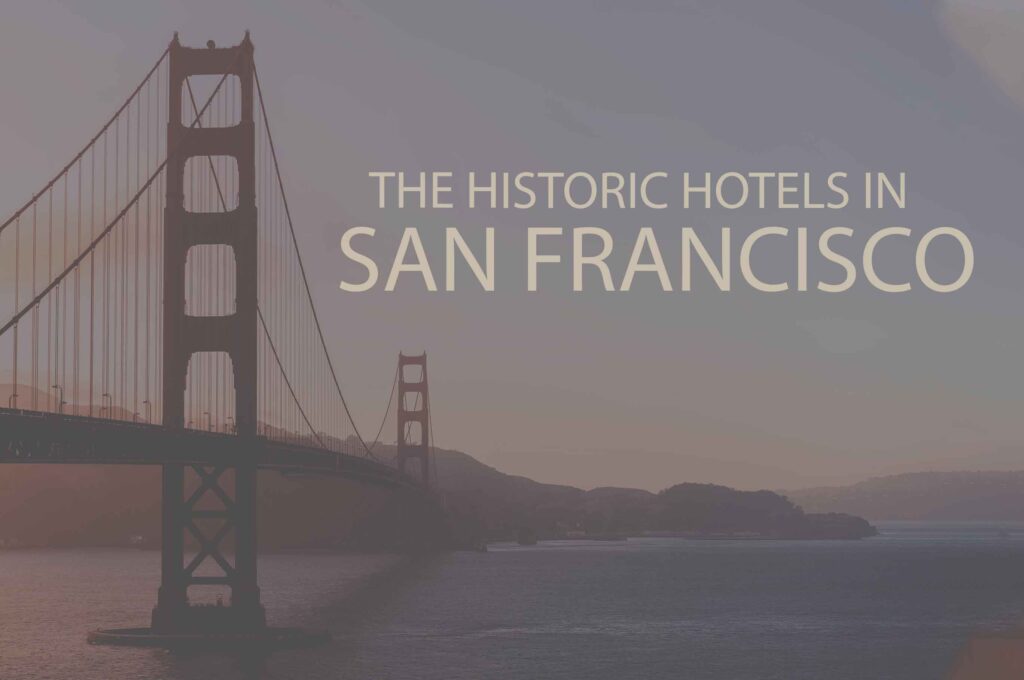 With excitement in every corner, San Francisco is worth being called a city of wonders. This modern city has a lot to offer. From scrumptious food to mesmerizing views and unique history, one will always want to return to San Francisco. On top of that, it’s also a historical city in the US. And as one of the most historic cities in the nation, you can rest assured there are plenty of historic accommodation options. Trust us; you won’t regret staying at one of the top historic hotels of San Francisco. They’ll take you back in time while still offering you modern conveniences. Psst! Some of them are even haunted! Want to know what is the oldest hotel San Francisco has to offer? We’ll let you know in this post as well! So, without further ado, let’s take a look at the top historic hotels in San Francisco!

The first hotel on this list is the San Remo Hotel. Over a century ago, after the 1906 earthquake destroyed most of San Francisco, a new hotel at 2237 Mason Street was built. The three-story hotel was named the New California Hotel, which is an optimistic vision of the city’s rebirth. Then, in 1922, the hotel was renamed the San Remo. Eventually, it became a North Beach neighborhood institution!

Though a long time has passed since this San Francisco hotel was built, it still has that old-world ambiance today. You’ll find quiet guestrooms without phones or flat-screen TVs, Victorian heirloom furnishings, and historical photos here and there. With its charming vibe, many international and domestic guests end up returning to this hotel whenever they visit San Francisco.

The Warwick San Francisco is one of the city’s most storied hotels. Only steps away from Union Square, this hotel was built as the Maryland Hotel in the year 1913. Designed by local architect Arthur Brown Jr., this hotel boasted Beaux-Arts style. Although the hotel has recently received a much-needed revamp, you can still see many details from a century ago, giving it an old-world elegance.

Once you enter the hotel, you’ll be captivated by the 100-year-old chandelier that hangs in the lobby and the murals above the elevators. Though it’s on the smaller side, with only 74 rooms, more than half of them are deluxe rooms! What’s more, the airport is only a twenty-minute drive away from this hotel!

Go back in time by spending your nights in Queen Anne, one of the most recommended historic hotels of San Francisco. Conveniently set near Union Square, this hotel used to be a boarding school for girls, Miss Mary’s School for Girls. Since its construction in 1890, it has undergone plenty of renovations. Today, the hotel has been amazingly restored to reflect the elegance it used to have.

However, did you know that Queen Anne is also seen by many as one of the city’s most famous haunted hotels? It’s said that Miss Mary Lake remains in the hotel, Room 410. It’s said that she’d gently tuck in sleeping travelers, making sure that blankets cover them. Even a guest woke up and found themselves on the floor with blankets neatly tucked around them. If you’re curious about this friendly ghost, you know which room to book!

Boasting 1920s vibes, the Beacon Grand A Union Square Hotel is one of our favorite historic hotels of San Francisco. This hotel is a masterpiece, from its gilded palatial-style interiors to its sweeping, ornate staircases. A Union Square icon, the hotel opened in 1928. Since then, it has accommodated plenty of important figures like politicians and celebrities.

Although it’s not the oldest hotel San Francisco has to offer, it can’t escape those creepy rumors! Some visitors have had their fair share of hair-raising activity, like flickering lights and strange noises. Not only that, as rumor has it, one of the hotel’s previous owners still haunts the building! So, whether it’s creepy or not, it’s for you to decide!

You can’t talk about historic hotels of San Francisco without mentioning the Phoenix Hotel. To sum it up, this hotel is a rock and roll legend! Opened in 1956 as a traditional American motel, it did a pretty decent job as a motel. However, it then fell into despair in the ’70s and ’80s. Thankfully, Chip Conley bought the building in 1987 and turned it into a boutique hotel in San Francisco. Additionally, he thought the large parking lot would be a great place for bands on tour who needed a spot to park their bus at night.

Since then, the hotel has been attracting some of the biggest stars, including David Bowie, Neil Young, as well as Kurt Cobain. Hotelier Liz Lambert recently revived the hotel. The interiors of this hotel stay true to the hotel’s musical roots. You can still find vintage concert posters and an expansive record collection near the reception.

Like many other historic hotels of San Francisco, Omni San Francisco wasn’t originally a hotel. It was built as a bank in 1926. It wasn’t until 2002 that the building was renovated and opened as the luxurious hotel in San Francisco that we all adore today. The hotel embarked on a restoration project that transformed the 17-story bank into a 362-room hotel will lavish amenities.

The hotel was redesigned to cater to the contemporary needs of travelers, but it still has that touch of elegance that the building was once known for. And to recreate that 1920s atmosphere, all of the guestrooms on the property feature high ceilings and cherry wood furniture. The bathrooms also boast Chinese granite vanities and Italian marble floors and walls.

The InterContinental Mark Hopkins San Francisco is another highly recommended option for those looking for historic hotels of San Francisco. Though it’s not the oldest hotel San Francisco has to offer; it’s nothing short of charming! Originally built in the year 1878, the hotel was destroyed by the Great San Francisco Earthquake of 1906. It was then rebuilt, and in 1925, it was bought by George D. Smith and made into a luxury hotel that opened a year later.

At one point, this hotel was even declared to be architecturally perfect. Like many other hotels on this list, it also took part in the city’s rich history, hosting numerous American presidents and even royalty. Today, this is one of the best hotels in the heart of San Francisco. Needless to say, it still boasts some of its original features and that old-world charm.

Up next is Fairmont Heritage Place, Ghirardelli Square, one of the most historic hotels of San Francisco. It was housed in what used to be a chocolate factory that was built in 1893, and it’s well-known for its dining outlets and boutique shopping. As the cornerstone of Ghirardelli Square, it was always crowded. Then years later, it was reinvented as Fairmont Heritage Place, a historic hotel that’s loved by many even today.

The residential-style suites allow you to experience everything the city has to offer in an intimate way. Many of the bedrooms still incorporate the factory’s original brick walls and offer the comforts of home. Better yet, you can admire the fantastic views of the bay and San Francisco’s skyline from the comfort of your room!

There are many historic hotels of San Francisco, and the Chateau Tivoli Bed and Breakfast is one of the most notable ones. It’s a restored Victorian mansion set in the city’s historic Alamo Square district. Due to its design and location, it easily attracts history buffs. Built in 1892, this charming, Candyland-like palace has been turning heads and attracting travelers since it first opened. Once a private home, it’s currently an ideal base for those who want to go back in time.

This hotel now offers nine guestrooms and suites. Compared to other hotels on this list, the number of rooms may raise your eyebrow. But you shouldn’t worry, as each of them is lavishly appointed with everything you need and more. You can expect crystal chandeliers, period wallpapers, and oriental rugs inside the hotel. San Francisco is known for its color and charm, and we think no other hotels embody those characteristics better than this one.

The Marker San Francisco is an amazing addition to our list of the top historic hotels of San Francisco. The building was originally built in 1910 and was known as the Bellevue Hotel. After it began operating, it quickly became one of the most prominent hotels in the city. Many loved its grand lobby and main entrance, and each of the 300 guestrooms was supplied with everything travelers needed.

Fast forward a century later, the hotel underwent some changes and had a major facelift. Now called The Marker, the original features of the old hotel can still be found, like the central fireplace with built-in benches and the grand staircase. On top of that, each meeting room on the property is named after actors and characters from 1941’s “The Maltese Falcon,” which was shot in the neighborhood.

What is the oldest hotel San Francisco has to offer, you asked? Well, look no further! Opened in 1875, the Palace Hotel is San Francisco’s oldest hotel. It has an illustrious, colorful, and haunted past, making it an extremely interesting accommodation. When it first opened, it was seen as the city’s first luxury hotel and the largest worldwide. However, the hotel was destroyed because of The Great 1906 San Francisco Earthquake. Then, it was rebuilt and reopened in 1909. For over a century, the hotel has been one of the most prominent landmarks in the city.

Despite being the oldest hotel San Francisco has to offer, it’s far from outdated! In 2015, it underwent a huge renovation, making it look more modern while still maintaining its original elegance. Today, travelers worldwide and locals love to enjoy its first-class accommodations, high-end amenities, top-notch service, and superb dining. It’s safe to say that among all of the top historic hotels of San Francisco, this one is the best!

Recommended Things To Do in San Francisco