Top 10 Things To Do In Amritsar 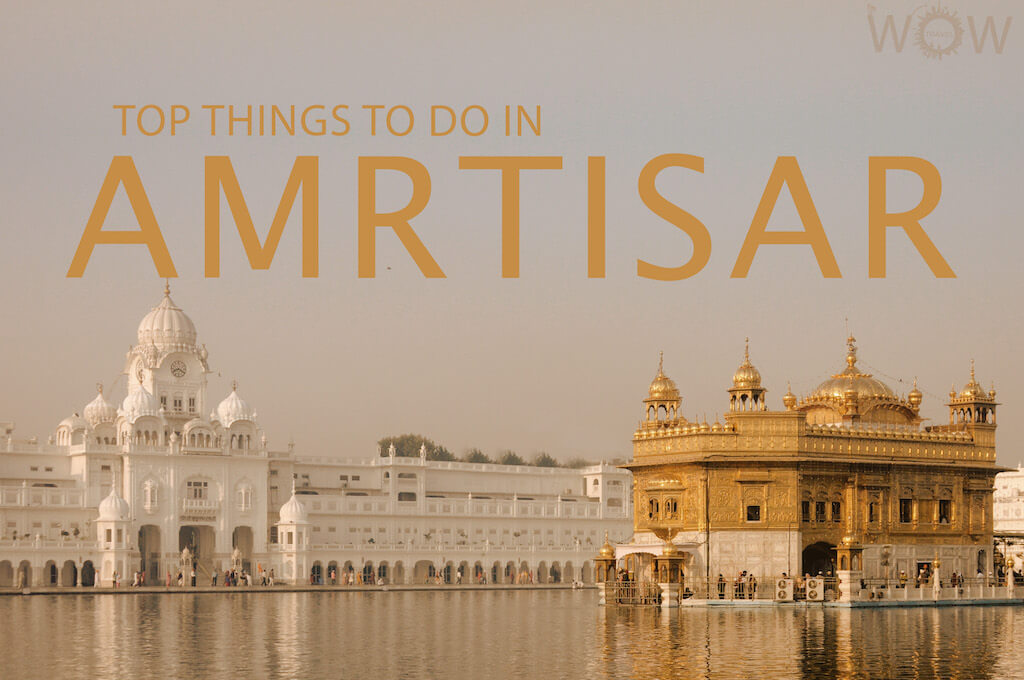 Located in the northwest region of India, Amritsar is one of the most historic cities of northern India and is mostly famous for two things – rich culture and delicious food. You would hear “Sat Sri Akal”, the colloquial greeting, in every hook and corner of the place. If you are on an exploration to India, Amritsar is the place you must not miss. Below are mentioned some of the top things that you can plan to do while you stay at Amritsar.
[booking_product_helper shortname=”amritsar”]

Golden Temple tops the chart when it comes to Amritsar. In fact, many devotees plan a trip to Amritsar only to visit this serene and tranquil temple every year. It is actually just a part of the much bigger Harmandir Sahib. The temple is housed in the centre with a magnificent shrine covered with pure gold, surrounded by a water body on all sides, known as the “Amrit Sarovar”. It is this Amrit Sarovar which is believed to carry mystic healing powers and people from all over the world visit this place to make their wishes come true! Huge markets with vendors selling local food and ethnic articles have amassed the area surrounding Harmandir Sahib. So that is as well a treat in itself. Can’t get enough of the view? Stay at one of the best hotels in Amritsar near the Golden Temple.

Wagah is the border of India and Pakistan, and a ceremony is known as “lowering of the flags” is carried out every day jointly by the Indian and Pakistani troops since 1959 and more than 40,000 people visit the Wagah Border every day. The drill is so fascinating, it involves the two forces making brisk dance-like movements, which is actually a parade, and raising legs as high as possible. However, the real excitement is because the forces on both sides carry so much rivalry and hostility towards each other, that it is clearly depicted in their march in a very spectacle manner. It is as if they are fighting an invisible war! It is absolutely free for civilians and begins 30 minutes prior to sunset every day.

Hall bazaar is the ancient market of Amritsar, and over the years it has transformed itself to fit in the new era without losing its exclusivity or label. It is the one place where you can get anything from the most aged or traditional treasures to the latest gizmos and gadgets. The entire bazaar is dotted with tasty food joints here and there so that you can easily spend an entire day without any inconvenience.

Kesar Da Dhaba is the eatery that has seen the holy city of Amritsar flourish and grow since childhood. Do not be fooled by the many names other eateries use to deceive tourists using all the permutations and combinations possible with Kesar Da Dhaba. Get the address from some locals to reach here, the savor and aroma of this small plain restaurant prove tough even for 5 stars to handle! The parantha thali and lassi served here are a delight for your taste buds.

This was a garden (bagh), famous for the well which engulfed hundreds of innocent freedom fighters in its womb on the ill-fated day of 13th April 1913. On this day, people had gathered here for a national meeting, however, never returned home because of the gunfire by General Dyer. Many tried to escape it by jumping into the well, getting killed anyway. After Indian independence, the government turned this place into a memorial. The site gives a tough competition to the Golden Temple if the visit agenda is not pilgrimaging.

India is a land of spirituality and devoutness. Ramayana and Mahabharata are the two most eminent epics of ancient India. Ramayana has its branches rooted in the holy land of Amritsar. It is believed that Sita’s twin sons Luv and Kush were born at Ram Tirath, about 11 km to the west of Amritsar. Also, rishi Valmiki, who wrote Ramayana, completed his work at Ram Tirath Ashram. Get to know a lot about the world-wide acclaimed religion of Hinduism, the Hindu gods and goddesses, which are a way of life in themselves by visiting this Temple.

Central Sikh Museum is the house of all the belongings of Sikh martyrs who devoted their lives for the freedom of ancient India from British rule, and general upbringing and well-being of India and especially the Sikh fraternity. Apart from that it also showcases Sikhism, the Sikh Gurus, various manuscripts, Sikh history and culture. Get enriching knowledge about Sikhism and pay a tribute to the saints of this place when you are in Amritsar.

Amritsar is the home of Gurudwaras. Every gurudwara is an episode of history believed to have many hermetical powers. Also, the “langars” and the “Kada Prasad” that you will receive are an experience in itself. How the devotees carry on “seva” wholeheartedly is a peaceful and friendly sight in itself.

Old Fawara (Fountain) Chowk is located in the center of Amritsar and it’s a great place to meet the locals. Amritsar is also unique in the manner of hospitality and warmth you feel when you are among locals. No other place in Punjab is so welcoming and accommodating when it comes to interacting with strangers. Just greet them with a “Sat Sri Akal” and there you go. Amritsaris wear their hearts on their sleeves and will go the extra mile to help you and guide you. They consider a guest as a messenger of God, the responsiveness and affection is definitely a soup for the soul.

Khalsa College is one of the most spectacular buildings in terms of architecture in Amritsar.