Top 10 Things To Do In Bath 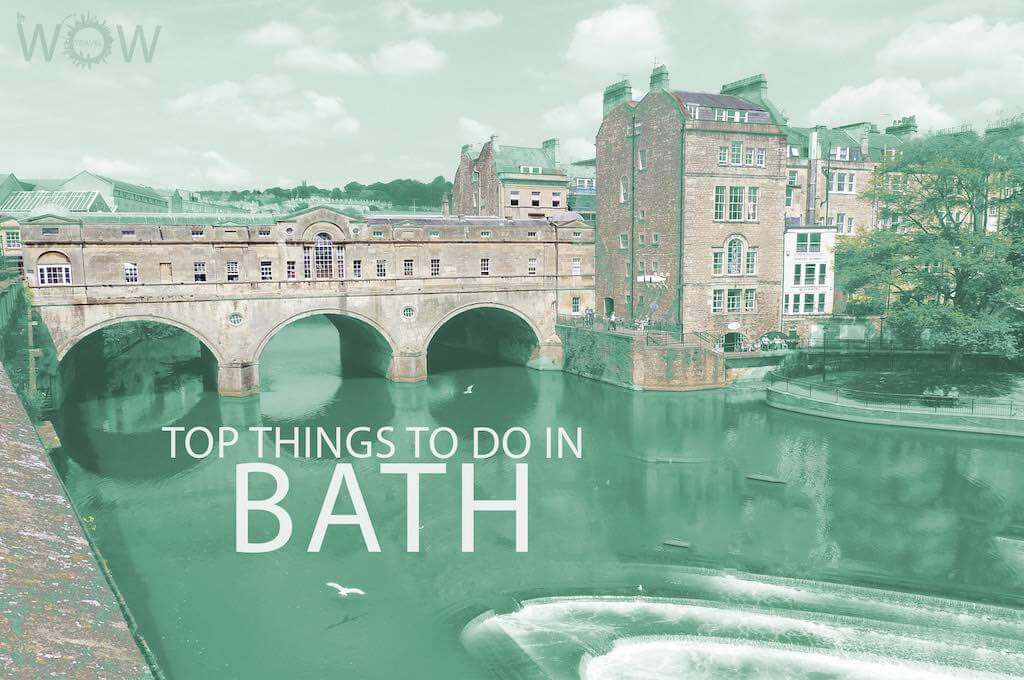 Bath is one of England’s most beautiful cities. Located near Bristol airport and just over two hours away from London. Bath has a  history that dates back thousands of years. A hugely popular place. The city welcomes visitors in their hundreds of thousands every year. They are drawn to the stories of its famous residents such as Jane Austen. The only city in the UK to be named a UNESCO World Heritage Site. The city was built by the Roman Empire. The Romans first saw the benefit of the natural hot springs that the city is famous for. Now, Bath is a thriving city that features amazing buildings. Here we’ll talk about the top 10 things to do in Bath.
Booking.com

This is of course, what Bath is most famous for. The Roman Baths were constructed around 70AD for meeting people and bathing. Now, the Roman Baths are one of the best-preserved Roman sites in the world. The Baths feature ruins and a museum. A visit will take you back to Roman times. You will have the chance to visit chambers and changing rooms. You can also walk on the same pavements the Romans did 2,000 years before. After your visit, you can try out the spa water that contains over 40 minerals. This water has drawn visitors to the city for hundreds of years.

Known for its stained-glass windows, honey-gold stone columns and its incredible fan vaulting. Bath Abbey is a fantastic place to visit and marvel at this work of incredible architecture. Since it’s construction 1,200 years ago, the Abbey is still a place for Christian worship and is a living and breathing church. Services run throughout the week, where you can visit and experience the beautiful atmosphere. Visiting the church you can learn about the history of this incredible building. When you visit the church, the first thing you will see is the unique ladders of Angels. This was inspired by the Bishop of Bath’s dream of ascending and descending angels.

Pulteney Bridge is one of the best examples of Georgian designs. It is one of the many reasons why Bath is known as the architectural home of the UK. Designed by Robert Adam and named after Frances Pulteney. The bridge was part of a larger plan to create a ‘new town’ in Bath. The bridge is an incredible site, home to independent shops, restaurants, Bath Rugby Club’s Official Store. Known as one of the world’s most romantic bridges. The bridge has been used in film and TV for many years, including in Tom Hooper’s Les Miserables. One of the best ways to appreciate this architectural masterpiece is to view it from Parade Gardens.

In the very center of the city is the award-winning natural spa; Thermae Bath Spa. Visiting the spa, you can enjoy Britain’s only warm and natural waters, rich with minerals, exactly as the Romans did 2,000 years before. Whether its day or night, you can enjoy the indoor Minerva Bath. If you want a spectacular view of the city, relax in the open-air rooftop pool. There are over 40 different packages and treatments in the Wellness Spa. Thermae Bath Spa is the perfect choice for a spa break when you are visiting this city. The Thermae Bath Spa Shop offers a range of different products for you take a piece of Thermae back home.

An architectural marvel, originally known as King’s Circus. The Circus is one of the most famous sites in the city. Designed by the architect John Wood. Construction started in 1754 and was finished in 1768. Sadly, John Wood never saw the finished design, dying shortly after the building began. Made up of three curved segments which form a circle with three separate entrances. One of the most incredible aspects of The Circus is that viewed from the air, the Circus, along with Queen Square and Gay Street form the shape of a key. A symbol for the Freemasons, of which Wood was a member. Wood was interested in history and the druids. Looking around The Circus you will see there are many carvings on the stonework. Serpents and other natural symbols. One tip is to make sure you stand in the center, to find the exact spot where anything you say, echoes.

Pride and Prejudice, Emma, Mansfield Park are just a few of the famous works by world-renowned author Jane Austen. Visiting the Jane Austen Center is a vital tick off the Top 10 things to do in Bath list. Visitors to the Jane Austen Center can visit the world of her classic books. Set in a townhouse that has been decorated to reflect the time. You have the chance to walk in the shoes of your favorite characters by dressing up in costumes. Visitors have the chance to meet with Jane Austen herself. A waxwork portrayal of Jane Austen, derived from eyewitness accounts, is inside waiting for visitors to glimpse the person behind the classic novels.

Offering an incredible view across the city is Prior Park Landscape Garden. This majestic eighteenth-century landscape garden is the perfect chance to step back into the past of this great city. Created by Ralph Allen with the help of poet Alexander Pope and architect Lancelot Brown. The garden offers plenty to enjoy. The grotto is where you begin your visit. After enjoying a virtual tour of the garden. You will come across buildings from the past. A cottage and icehouse are just some of the features. At the bottom of the valley, is the famous Palladian Bridge, one of only four.

In the Assembly Rooms, is the Fashion Museum Bath. The perfect visiting spot for those fashion lovers out there. The Fashion Museum Bath has a collection of fashion. From the gowns of historic Georgian Britain to the latest fashion from leading designers. Featuring 160 figures, dressed in items of clothing. You can learn the history of fashion from its beginnings to the present day. Visitors to the museum have the chance to try on different pieces of clothing. After a day of exploring, they can relax with a tea or coffee in the Assembly Rooms Café.

Walking through the Assembly Rooms is like stepping into the pages of Sense and Sensibility. These rooms were the heart of social life in the eighteenth century. The Octagon, Ball Room, Card Room, and Tea Room were used for talking, playing cards, dancing and the very English routine of tea drinking. These rooms are still used for events and other functions. Amazing in their design, they all feature original Whitefriars crystal chandeliers.

For those who enjoy their history and movies. The Little Theater Cinema is a perfect place for a film lover. Opened in 1935, this three-screen cinema is the perfect space. Ideal for watching the latest in arthouse film, from dramas to screenings of classic films. Like the rest of Bath, the building is part of history, built on old caves. The film is even part of cinema history, having been seen in Wes Anderson’s Fantastic Mr. Fox.