Top 10 Things To Do In Geneva 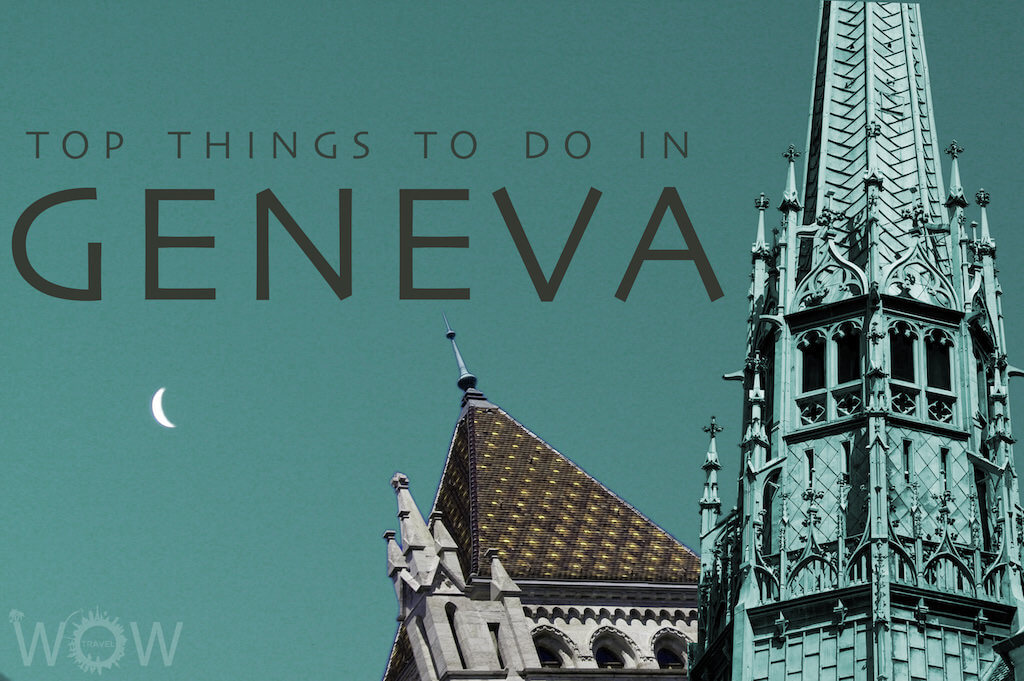 As the second-largest city in Switzerland, Geneva is home to many cultural, historical and natural attractions while also being the hub of banking, technology and tourism. It occupies the westernmost corner of Switzerland, literally on the French border, flanked by the stunning Alps and gorgeous Lake Geneva. Famed for its overabundance of haute cuisine restaurants, with 53 Michelin Star restaurants, over 40 museums and a multitude of activities and tourist attractions, Geneva offers one for every traveler’s taste. Enjoy our list of the Top 10 Things To Do In Geneva.

The Jet d’Eau (‘water stream’) is the 140 meters (459 ft) high fountain in Lake Geneva. It’s located just in front of the promenades of Geneva and is the key part of the city’s skyline. The fountain dates back to 1886, but actually it wasn’t meant to be a fountain from the beginning. It was a technical necessity, only created to release pressure from a water station. When it started attracting visitors, it was moved to a better location and a powerful pump was installed. Today, the water emerges from the nozzle with a speed of 200 km/h (124 mph). Source: myswissalps

Built in the 4th century, Cathédrale St-Pierre, a beautiful example of neoclassical architecture, is a significant place for performing spiritual and cultural duties. It is famous as the adopted home church of Protestant Reformation leader, John Calvin. Visitors may tour the archaeological site underneath the newer cathedral. Do yourself a favor and ascend the 157 steps of the north tower to experience one of the city’s most breathtaking views and its surrounding countryside.

Located in Bastions Park, the Reformation Wall is more than just a wall for history lovers, some consider this Switzerland’s Mt. Rushmore. Visitors will find the four great figures of movement: Guillaume Farel, Theodore de Beze, John Knox and Jean Calvin. This is a great tribute to 450 years of Protestantism.

Situated below the old city walls, this impressive structure is considered to be Geneva’s cultural epicenter. The Rath Museum, Conservatory of Music and Grand Theatre (Opera House) are all located on this historical square in Geneva. Just around the corner are the Maison du Grütli, a venue for many modern cultural events, and the Victoria Hall.

At CERN, the European Organization for Nuclear Research, physicists and engineers are probing the fundamental structure of the universe. They use the world’s largest and most complex scientific instruments to study the basic constituents of matter – the fundamental particles. The particles are made to collide together at close to the speed of light. The process gives the physicists clues about how the particles interact and provides insights into the fundamental laws of nature. Source: cern.ch

Some 2 km (3.6 miles) south of the city center, the suburb of Carouge is a quite different experience from Geneva proper and a bohemian haven that has its own distinct atmosphere. From 1774 to 1792, this hamlet of a hundred people grew to a bustling town of four thousand and, although Carouge never did overtake Geneva, it’s still something of a refuge from the city, its quiet, attractive streets packed with artists’ workshops, old-style cafés and some of the city’s best small-scale nightlife. Trams #12 or #13 from the city centre can drop you at the Place du Marché in the heart of Carouge, still used as a marketplace. A major feature of Carouge are the delightful internal galleried gardens which lurk behind almost every gate: most are open, so feel free to explore. Source: switzerland.isyours

The cable car of Mont Salève carries you to an altitude of 1,100 meters (3608 ft) in less than five minutes. Mont Salève is an immense playground for sports lovers. You can go paragliding, climbing, mountain biking, trekking or cross-country skiing in winter. Nature lovers will enjoy the fresh air, the fauna and flora and the stunning vista of Geneva. On the south-east side, you can enjoy a view of the Alps with the Mont-Blanc massif. Food lovers can meet at the restaurant. Source: geneve-tourisme

Clustered on a hill around the Cathédrale Saint-Pierre, Geneva’s Old Town is the perfect place to get lost in an afternoon. It is loaded with historical intrigue and a string of cafés, restaurants, terraces, many antiquaries’ shops, art galleries and boutiques. Much of it is pedestrianized including Place du Bourg-de-Four, a former Roman marketplace and the oldest public square in Geneva. Apart from the many bistros and shops in the Old Town, major attractions include: the 15th century Hotel De Ville (one of the 11 Best Hotels in Geneva), the seat of government in Geneva; the Old Arsenal; and The Treille Promenade, offering outstanding views of the city. It’s also home to Maison Tavel, the town’s oldest primary residence, now a museum of urban history and daily life.

Palais Des Nations serves as the home of the United Nations Office and was built in the early 1900’s. The headquarter building is a magnificent structure that symbolizes the city and its contributions to peace.

Surrounded by a stunning backdrop of mountains, and has fantastic promenades, Geneva Lake was formed by glaciers during the Ice Age. Stroll the promenades around the lake and soak up the atmosphere. Take a dip at Bains de Paquis – This pool was built in the 1930s, but is still a popular place to get a massage, unwind, or swim. There are facilities for swimming in the lake, diving, saunas, Turkish baths and recreational activities. The best way to experience the lake is by two-hour boat cruise.