Top 10 Things To Do In Kandy 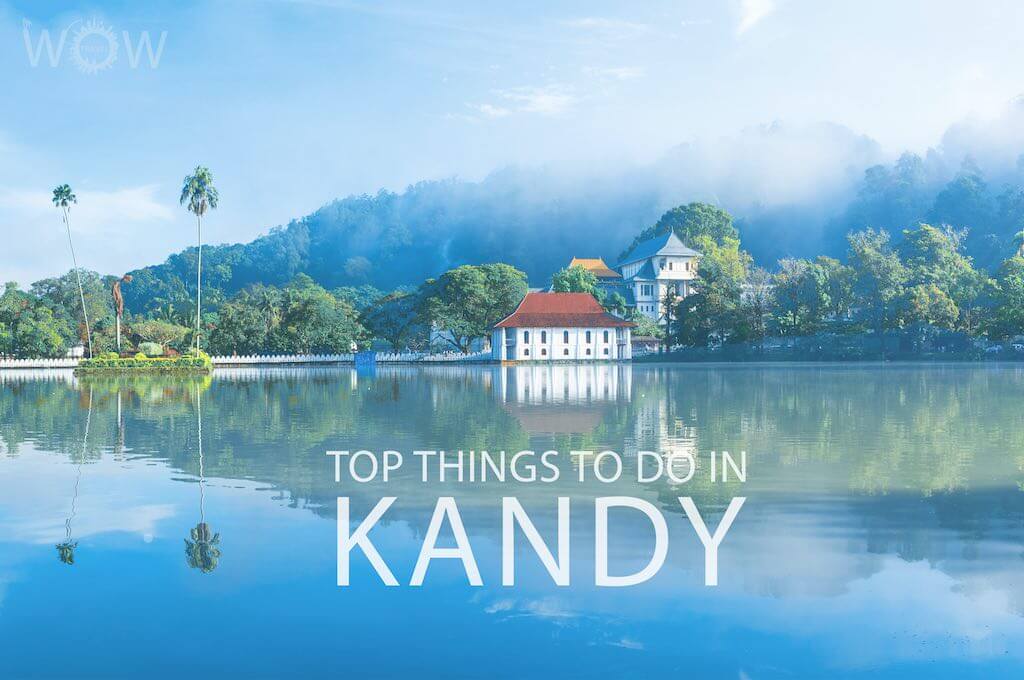 Looking for the top 10 things to do in Kandy, Sri Lanka? We’ve got you covered. This ancient and historic city is the capital of Sri Lanka’s Central Province. Once the seat of the country’s ancient kings, Kandy dates back to the 1st century AD. Today, many visitors flock to Kandy to see the beautiful architecture and verdant hills. Its remarkable culture and warm hospitality are also pleasant things to experience. Whether you’ll be in town for a long, leisurely holiday or a quick stop as part of a private guided tour of Sri Lanka heritage sites, you’ll discover plenty of things to do in Kandy. And if you’re looking for a great hotel in Kandy for a memorable vacation, don’t worry. Whatever your budget, there are plenty to choose from.

Temple of the Sacred Tooth Relic

Located within the Royal Palace complex, visiting this temple is one of the top things to do in Kandy. In the local language, it’s called the Sri Dalada Maligawa. Pilgrims from all over the world come here to be in the presence of the relic of the tooth of Buddha. It’s an object of historical importance. Popular belief holds that whoever possesses the relic also holds the governance of Sri Lanka. Every Wednesday, there’s a ritual held involving the symbolic bathing of the relic.

You don’t have to register as a guest to admire this Kandy landmark. The Queen’s Hotel, built in the 1840s on instructions from the king, was originally a colonial manor house. Kandy Hotels Co. Ltd. acquired the building in 1895 and transformed it into a first-class establishment. This eye-catching Kandy hotel is in the British Colonial architectural style. Today, it’s home to the Pub Royal, the only British pub in Kandy where the service exudes an old colonial aura.

Visiting the Bahirawakanda Vihara Buddha Statue is one of the top 10 things to do in Kandy, Sri Lanka. It stands almost 27 meters (88 feet) high, making it one of Sri Lanka’s tallest Buddha statues. It’s beside the Sri Maha Bodhi Viharaya, a Theravada Buddhist temple atop the Bahirawa Kanda hill. It might take quite a bit of effort to climb the steep stairs to reach the statue. But the views are breathtaking once you get there. It’s particularly scenic at night, with the entire city twinkling below.

Kataragama is a deity whose worshippers include Buddhists and Hindus. His colorful temple in Kandy resides in the commercial Kotugodella Vidiya district. An ornate and colorful gateway stands over the main entrance of the devale (shrine). In the building, various departments serve different functions. These include the drummers’ quarters, the inner sanctum, and space where the officiating priests conduct their rites. One of the reasons why this temple is one of the top places to visit in Kandy? Because legend says Kataragama grants wishes!

A short distance from the Temple of the Tooth, this cemetery is a somber reminder of Kandy’s colonial past. It’s the final resting place of almost 200 British men, women, and children. Some were the victims of war, but most died from tropical diseases such as cholera and malaria. The cemetery dates from 1817 and is a peaceful place for reflection if you want to escape the crowds at the temple. British colonial administrator John D’Oyly’s grave is here. So is that of John Spottiswood Robertson, a young man of 23 killed by a rampaging elephant.

These magnificent gardens lie in the Kandy suburb of Peradeniya, about 6 km southwest of the city center. Centuries ago, Kandyan royalty and nobility had exclusive use of the grounds. But in 1821, the area became the Botanic Gardens at the behest of the British colonizers. Today, it’s the biggest botanic garden in Sri Lanka, with an annual visitor count of more than two million. Highlights include the orchid garden and the cannonball tree planted in 1901 by King George V and Queen Mary of Great Britain. Spending hours here answers the question of what to do in Kandy, Sri Lanka.

You don’t have to go far to see and experience Kandy’s natural beauty. A short uphill stroll will lead you to the Udawattakele Forest Reserve & Sanctuary (or Udawatte Kele) above the Royal Palace and the Temple of the Tooth Relic. Once, during the reign of the Kandyan kings, the area served as the pleasure garden of royalty. Today, the 104-hectare reserve shelters a wide variety of plant species such as lianas and orchids. Also, it’s a popular place to visit for birdwatchers. Other animal species in the forests include snakes, deer, and flying squirrels. And if you’d like to go farther, you can take a Minneriya Park Tour where you can marvel at rare bird species, Indian pythons, and iconic Sri Lankan elephants.

This artificial lake, also called Kiri Muhuda (Sea of Milk), is an important part of Kandy’s heart and soul. In 1807, King Sri Wickrama Rajasinghe had the lake built beside the Temple of the Tooth. After that, he had his personal harem live on the island in the middle of the lake. Nowadays, the lake draws throngs of visitors and locals alike. Local wildlife is also plentiful here, from graceful pelicans to fearsome monitor lizards. Going on leisurely strolls around the lake is one of the top 10 things to do in Kandy. You can also feed the fish, but keep in mind that there’s a ban on fishing here. Kandy Lake is a serene stop in an All-Inclusive City Tour, a beautiful place to relax and take a break from sightseeing.

This open-air chapel is a beautiful example of traditional Sinhalese indigenous architecture. Construction started in 1923 and finished in 1935. The high, Kandy-style double-pitched roof sits on 54 granite pillars with intricate carvings. Beautiful murals showing scenes from the Bible, by Sri Lankan painter David Paynter, adorn the side chapel. During the school term, Trinity College students hold their weekly devotions here. Also, Sunday morning services take place in the chapel. Meanwhile, concerts and other musical events throughout the year attract visitors to the chapel. Attending these events is one of the popular things to do in Kandy, Sri Lanka.

A few steps from the clock tower in the city center is the bustling Kandy Market. It’s one of the best places to see cacophonous slices of local life. You’ll find the freshest fruits and vegetables, freshly caught fish, pungent spices, choice cuts of meat—basically all sorts of food. Go upstairs and hone your bargaining skills for good deals on clothes, shoes, books, and a large assortment of local handicrafts. And if you’re feeling peckish after all that shopping, you can grab a quick bite in one of the market’s eateries.