Top 10 Things To Do In Palma de Mallorca 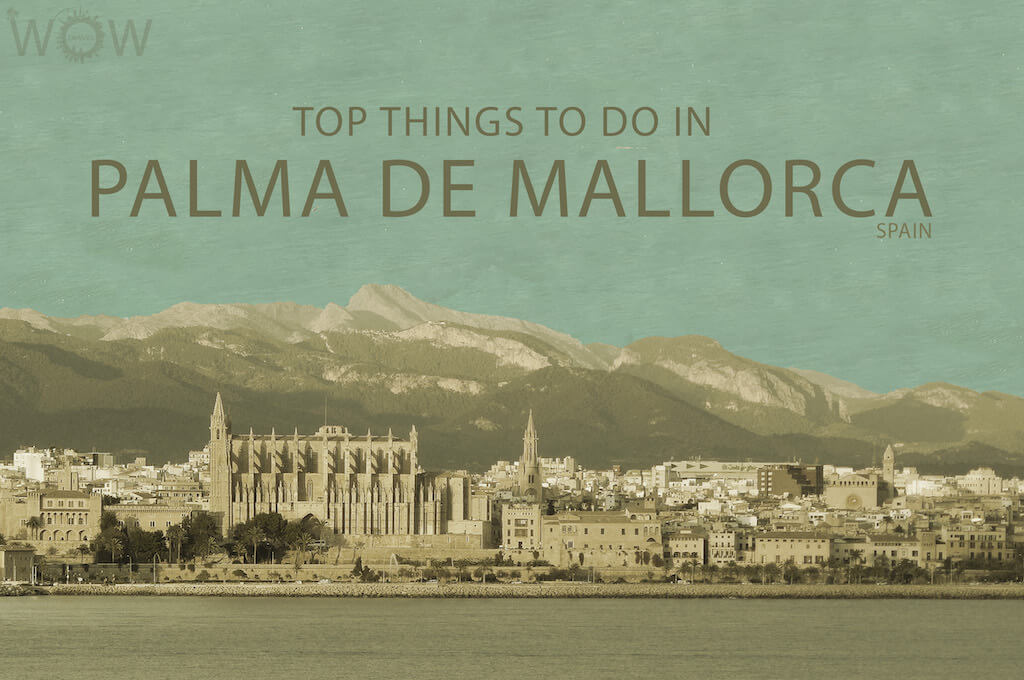 Mallorca is the largest of the four Balearic Islands off the coast of Spain, in the Western Mediterranean and the capital, Palma de Mallorca, is a vibrant, stylish, sophisticated city that bursts with life and a lovely place to spend most of your time. From beautiful beaches and old city with fascinating history to great restaurants and nightlife. Check out our list of the Top 9 Things To Do In Palma de Mallorca.

The Mallorca Cathedral or ‘La Seu’, as it is known in Mallorca, is an impressive Roman Catholic basilica erected in 1300g on the ruins of a former Arab mosque and certainly one of the most famous Gothic buildings in Europe. It is the main religious edifice in Palma de Mallorca and one of the city’s finest historical and artistic attractions.

Just west of Palma de Mallorca’s city center & harbor sits Bellver Castle. The circular castle was built high on a hill above the city, giving 360 degree panoramas over much of the island. The view is magnificent. Built in the 14th century, the castle was also used as a prison. In fact, a series of informative exhibits details the lives of some of the people who were incarcerated, including Gaspar Melchor de Jovellanos, a Spanish neoclassical statesman, author, philosopher and a major figure of the Age of Enlightenment in Spain who spent seven years imprisoned in the castle. Bellver Castle is also home to the Museum of the History of the City of Palma. Source: everybodyhatesatourist

These 10th century baths are virtually all that remain of the Arab city of Medina Mayurqa (now known as Palma). They were probably part of a nobleman’s house and are similar to those found in other Islamic cities. The tepidarium has a dome in the shape of a half orange, with 25 round shafts for sun light, supported by a dozen columns. Notice how each of the columns is different – they were probably salvaged from the ruins of various Roman buildings, an early example of recycling. Hammams were meeting-places as well as wash-houses, and the courtyard with its cactus, palm and orange trees would have made a pleasant place to cool off after a hot bath. Source: seemallorca

La Almudaina Palace was seat of the independent kingdom of Majorca during the reigns of Jaime I, Sancho I and Jaime II, until it became part of the kingdom of Aragón under Pedro IV. The castle visible today is the result of modifications to the Moorish fortress constructed from 1281. The building comprises a rectangular tower, home to the King’s Palace, Queen’s Palace, a hall known as Tinell, the Royal Chapel and patios. Inside, special mention should be made of a range of tapestries and furniture from different periods of history. It is currently used by His Majesty the King of Spain as a residence for official summer ceremonies. Source: spainisculture.com

The Pueblo Español is like an open air architectural museum because it has reconstructions of almost a hundred monuments and buildings from the rest of Spain. Its construction began in 1965, and was officially inaugurated on March 9, 1967. The museum was conceived as a town that gathered the main characteristics of the Spanish people. A visit here gives you a whistle-stop tour of Spanish architecture, showing its development through Muslim and then Christian influences.

Located in the center of the city is Palma’s biggest food market, It has a plethora of 100+ stalls with fruits, meat, fish, cheese and baskets of olives.

The very best way to see this lovely city is simply to explore along the main streets and tiny lanes that thread around the old area of the city. Starting from leafy gardens beside the cathedral take time to look up and around – this city has a hotch-potch of architectural styles that reflect its historic past. Look out for the baroque façade of the Basílica de Santa Francesç, the 15th century splendor of the Exchange, La Llotja, the Art Nouveau flamboyance of the Fundació La Caixa and the Gaudiesque quirkiness of Casa Forteza Rey. Stop for tapas and chilled wine in one of the little bistros in the narrow lanes and take time out to relish evocative Palma. Source: blog.laterooms

Tucked away in the Serra de Tramuntana mountains 20 km (12.5 miles) north from Palma City, you will find the picturesque village of Valldemossa. The historic village of Valldemossa is filled with charm that attracted writers, artists, and musicians through the ages. Discover quaint cafés and traditional bakeries on the narrow lanes of Valldemossa and go to the Real Cartuja de Valldemossa monastery. It was built as a royal residence and converted to a monastery in 1399, nowadays it functions as a cultural center and is the setting for the annual Chopin Festival in summer. There is a museum, the old pharmacy of the monastery and amodern art museum with works by Picasso and Miro.

Deià is a beautiful town in the Mallorcan coast, just 35 minutes drive from Palma. The city center, with its ancient Mallorcan houses, sits on the side of a small hill that overlooks the Mediterranean. It has remained intact through the passage of time, being traditionally the home to many painters and artists. In the vicinity of this town, the coast forms secluded coves that invite rest and are the ideal setting to take a relaxing walk. The best known is the cove Cala de Deià, which has become a meeting point for the town’s folk, as well as an anchorage for vessels during the summer. In the higher part of the city, the parish church stands, whose origins date back to the late 15th century. In its interior we can visit the Parish Museum, which exhibits an interesting religious art collection. Behind the church we can visit the municipal cemetery (17th century), a splendid viewpoint over the valley, where many distinguished figures who lived in this village have their final resting place. Source: spain.info