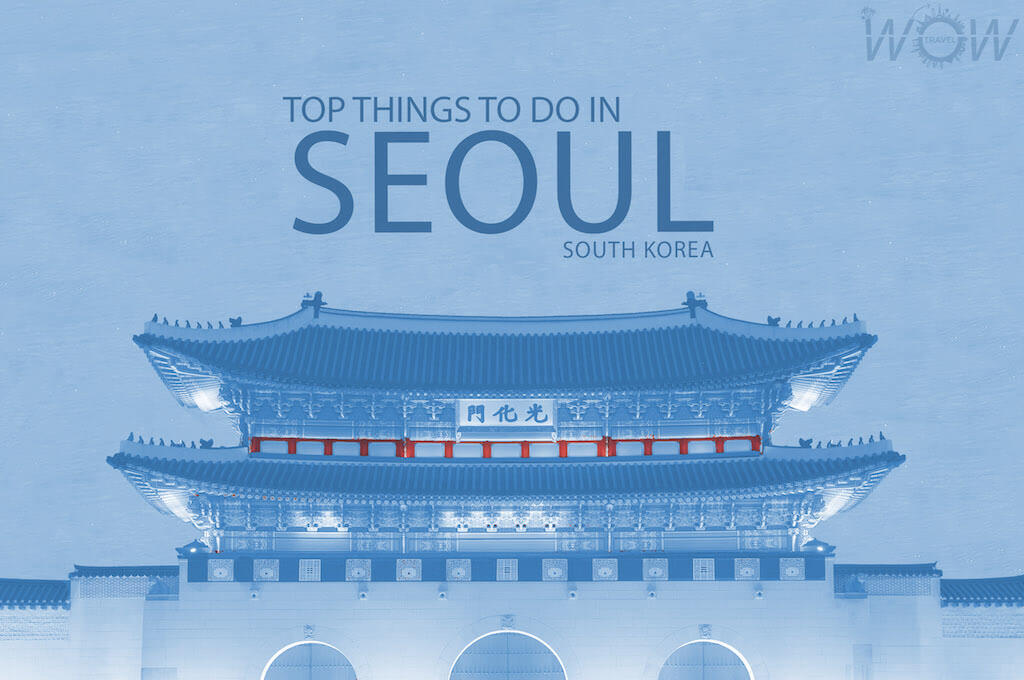 Located in the northwest corner of South Korea, Seoul is the largest city and capital of South Korea with 10 million people in the city and over 25 million in the greater metropolitan area, representing about half of all South Korea. Seoul is continuously growing and has become an economic, cultural, and political hub of the world. The city is willing to accommodate diverse global cultures and does its best to provide useful information to foreign visitors. Shopping and dining are two of Seoul’s most prominent features but you can as well go sight-seeing at palaces, visit many museums, drop by N Seoul Tower for a glimpse of the city or climb the famous Bukhan mountain. WOW Travel presents you its Top 10 Things To Do In Seoul.

“Located between the Banpo and Hannam bridges on the river’s south bank, the park was recently redone, with much of the natural vegetation removed in favor of expansive lawns, walking and bicycle trails, and a large play area for children. An inline skating rink and outdoor stages were also incorporated into the new design. This being a riverside park, jet skis  with water taxis and river cruise boats for primacy on the water.” Source: Discoveringkorea

Located just north of Seoul, Bukhansan is one of ten most beautiful places in Korea and it is also one of Korea’s national parks. It has three main peaks an it is a significant landmark that can be seen from almost all over the city. Bukhansan has very smooth curves that the large granite rocks sometimes look as if they would slide down the mountain. The sharp peaks provide contrast to the dozens of valleys and rivers flowing below. The mountainous terrain is naturally filled with innumerable Buddhist temples, Confucian shrines, and Shamanic shrines. It was and still is the guardian mountain of Korea’s 600 year old capital.

Established in 1927 and located in the Noryangjin-dong neighborhood, Noryangjin Wholesale Fish Market is Seoul’s oldest and largest indoor seafood center, housing over 750 vendors with fish brought in daily from fishing ports all over Korea. The nice thing about this market is that it is open 24 hours a day, 7 days a week.

A stream runs through the center of Seoul, dividing the city into North and South, but for three decades it was totally buried beneath a busy downtown highway. In 2003, as part of a vast urban renewal project, the highway was removed and the stream was recovered and turned into an 11 km (7 miles) long beautiful public urban park in downtown Seoul. The $900 million project initially attracted much public criticism but, after opening in 2005, has become popular among city residents and tourists.

Located in the heart of Seoul with more than 2 million daily visitors, Myeongdong is the primary shopping and fashion district in South Korea with over 300,000 square meters of restaurants, cafes, bars, night clubs and narrow streets and alleyways lined with endless of shops and department stores selling clothes, shoes, handbags, accessories, and cosmetics. Everything from bargain pieces to luxury goods or fake luxury products can be found here. Visiting the most famous department store “Lotte” is a must.

There are 5 palaces within the city which offer a taste of Korean history but Gyeongbokgung Palace is the most beautiful, the grandest and the most well-known of all. Gyeongbokgung, built in 1395 and located in northern Seoul, was the main royal palace of the Joseon Dynasty. Yi Seong-gye founded the Chosun Dynasty in 1392 and designated Hanyang (now Seoul) as the capital. He had a new palace built there and named it Gyeongbok (Felicitous Blessing) Palace. It was burned to ashes during the Japanese invasions of Korea from 1592 to 1598 and rebuilt in 1867. Visitors to the palace can watch the royal guard changing ceremony every hour from 10 a.m. to 3 p.m. in front of the main gate.

“Located smack-dab in the center of Seoul, Itaewon is home for the majority of expats that reside in Korea, making Itaewon a mini melting pot of cultures and religions from all over the world. The Seoul Central Mosque is also located in Itaewon along with a number of halal food stores, and large numbers of US military personnel can be seen here as the Yongsan Garrison that is stationed nearby. Due to the area’s diverse inhabitants, Itaewon has become one of the most cosmopolitan areas in Seoul boasting restaurants, shopping and nightlife that are equally diverse and cater to international tastes, attracting many other foreigners and tourists. It is safe to say that Itaewon is almost better known by foreigners and non-Korean residents than Koreans.” Source: visitseoul

“Bukchon Hanok Village is a village where traditional Korean houses called hanok form a group, which encompasses Gahoe-dong, Jae-dong, and Samcheong-dong in Jongno-gu. Bukchon has been a traditional residential district for more than 600 years of the history of Seoul. The name of Bukchon (meaning North Village) originated from it being the north village of Cheonggye-cheon and Jong-no. The village is located between two palaces arranged on Sung Confucianism, which was the dominant ideology during the Joseon Dynasty, and has a large concentration of traditional Korean houses against an excellent landscape background. The numerous branch-like alleys have been kept as they always were, dramatically showing the scene of the city with its 600-year history.” Source: lifeinkorea

A neighborhood that was inhabited by poets, artists, and liberal thinkers back in the day, and today it is one of the hottest spots in Seoul. It has 700-metre long street named Insadong-gil, buzzes with all the energy, culture and exoticism that is Seoul. Threaded with narrow alleyways, it’s filled with antiques dealers, book stores, art galleries, restaurants, teahouses, street vendors and specialized shops selling art supplies, pottery, music or furniture. We recommend you yo visit on a Saturday or Sunday when the street is closed to traffic. No doubt, some of the 11 Best Hotels in Seoul can be found here.

Namdaemun Market is the largest and best general wholesale market in Korea. It is known for offering virtually every product imaginable, including clothing and textile products, everyday items, kitchen utensils, handicrafts, accessories, imported merchandise, food, miscellaneous articles, farm and fishery products, and much more to wholesale and retail customers nationwide inexpensively. Namdaemun market is one of the major tourist shopping destinations, embodying the customer-first attitude and the diligence of Koreans.