Top 10 Things To Do In Timor Leste 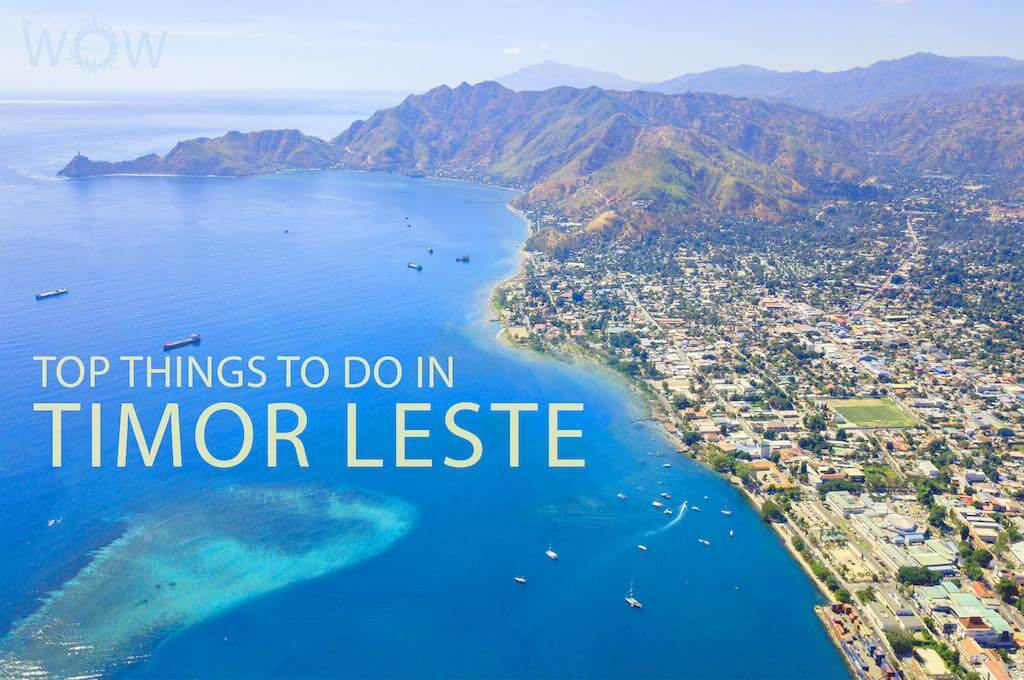 When you travel to Timor Leste, you’d be forgiven for wanting to extend your vacation. Many parts of this country in Southeast Asia are unspoiled pockets of paradise. Think crystal-clear aquamarine waters, deserted white-sand beaches, and one of the world’s most biodiverse marine habitats. Centuries of colonization by Portugal followed by tumultuous occupation by neighboring Indonesia in the late 20th century have left their mark. However, Timor Leste became a sovereign state in 2002 and today this nation at the eastern end of Timor Island is coming into its own. Though more and more visitors are discovering this country’s wonders, and booking a room at a hotel in Timor Leste, there are still places aplenty here far from the madding crowd. Would you like to learn more? Read on for some of the many terrific things to do in Timor Leste.

Also called Jako, this tiny island spans just 8 sq km (3 sq miles) yet packs quite a punch. It’s been called heaven on earth, and it isn’t hard to see why. A deserted islet, it’s teeming with dazzling white beaches, a dense tropical forest, and diverse wildlife. It’s also part of the vast Nino Konis Santana National Park. The locals consider Jaco Island as a sacred place, and overnight stays aren’t allowed. However, you can enjoy long hours under the sun here. Only the waves lapping on the shore and the occasional birdsong break the silence.

The capital city doesn’t hold back when it comes to things to do in Timor Leste. Climb nearly 600 steps to reach the Cristo Rei statue and marvel at the views of Dili Bay, watch textile weavers at Tais Market or swim at Dolok Oan Beach. You can learn more about the country’s recent history at the Timor-Leste Resistance Archive & Museum or drop by East Timor’s oldest Roman Catholic church, the Motael Church. For a more immersive experience, try a Full-Day Tour of Dili, which includes free admission to the city’s top attractions. And if you’re looking for nightlife, Beach Road (or Avenida da Portugal) is the place to be. There are plenty of restaurants and bars here, a good number with live music. You’ll also find a nice selection of hotels along this stretch of road. For example, Timor Backpackers is a good option for those seeking a budget-friendly hotel in Timor Leste.

Gray-sand beaches, lofty mountains, and forests make up the landscape of this municipality in western Timor Leste. It’s oozing with history and culture too. In the tiny village of Balibo, you’ll find a Portuguese fort that now houses a museum. Portuguese architecture is likewise present in Maliana, Bobonaro’s capital. Meanwhile, the conical thatched houses of the Tetun people in the mountain villages are excellent examples of native architecture. And if you head to Marobo village when you travel to Timor Leste, you can enjoy the natural geothermal hot springs, whose origins remain something of a mystery.

About 70 km (44 miles) south of Dili lies the cool village of Maubisse. And it’s literally cool, as it’s set in the hills 1,400 meters (4,600 feet) above sea level. The Portuguese used it as a settlement owing to its cool climate and rich soil; the ruins of centuries-old Portuguese buildings still stand here today. Also worth noting are uma luliks (holy houses). These structures feature cone-shaped roofs and altars for ancestral worship, and some have been converted into guesthouses. Maubisse is in the country’s main coffee-growing area, and if you travel to East Timor between June and September, you might just be in time for the coffee harvest.

Going on a beach break is one of the most popular things to do in Timor Leste. And with its gorgeous stretches of white sand, it’s no surprise that Atauro Island draws locals and foreigners alike. From Dili, the island is a one-hour ride away via a fast boat—or up to 3 hours if you opt to take the regular ferry. Come towards the end of the dry season, around November, and you’ll see the last part of the whale migration. Also seen regularly around the island are dugongs or sea cows. Inland, you can hike to the island’s highest peak and go shopping for fresh fish at the Saturday morning market.

Perched on the country’s northern coast, the municipality of Liquica offers a treasure trove of attractions on land and under the water. If you’re staying in Dili, we recommend the full-day Maubara and Liquica Tour to maximize your visit to Liquica. This area, like Timor Leste’s other waters, is part of the Coral Triangle, an immensely diverse marine environment with coral reefs, various species of fishes, and other forms of marine life. The waters off Liquica conceal magnificent underwater gardens waiting to be explored by divers and snorkelers. On dry land, you can see the ruins of the Aipelo, a 19th-century colonial prison built by the Portuguese. And in the town of Maubara, there’s a Dutch fort dating from the 17th century. After a day of adventure in and out of the water, you can kick back and relax at your Liquiça beach hotel in Timor Leste. There are several great ones to choose from, including the clean and modern Caimeo Beach Resort.

The country’s largest freshwater lake lies within the Nino Konis Santana National Park. And since it’s part of the Mount Paitchau Important Bird Area, it’s a haven for bird watchers. Head to the northern shore and be enthralled with scenic views of the lake, mountains, and forests. On the other hand, the southern shore offers a surreal kind of beauty with its swamps and half-submerged trees. Visiting Ira Lalaro might be one of the top things to do in Timor Leste. However, it’s best to admire the lake’s waters from afar since hundreds of estuarine crocodiles—which can grow to 5 meters (17 feet)—live here. The locals revere their crocodiles, which they believe to be linked to their creation legends.

This municipality right beside the Savu Sea is an enclave of East Timor that’s actually located on Indonesian West Timor. When Timor Island was divided under the 1959 Treaty of Lisbon between Portugal and the Netherlands, Oecusse-Ambeno stayed with the Portuguese section—or Timor Leste today. The Portuguese first landed in 1515 in Lifau—there’s a monument there commemorating this event. So it’s easy to understand why they wanted to retain Oecusse-Ambeno. In the main coastal town of Pante Macassar, you’ll find a gray-sand beach while Pantai Mahata to the east offers excellent diving and snorkeling. Meanwhile, waterfalls and dense jungles around Kutet make for ultra-scenic hiking.

The village of Tutuala might be small, but visiting it is one of the many interesting things to do in Timor Leste. Located in the eastern section of the country, it sits on a bluff overlooking the sea. Close by are caves with stone tools and paintings dating from the Middle Paleolithic through the Mesolithic eras. Down a hill from Tutuala is a stunning white-sand beach called Pantai Walu or Valu, or simply Tutuala Beach. The translucent azure waters here are perfect for swimming, snorkeling, and diving. Within view of the beach, just across the water, is Jaco Island.

When you travel to Timor Leste, you might want to stop by this municipality in the east. White-sand beaches and coves line the breathtaking coastline while inland, formidable peaks such as Mount Matebian and Mount Ramelau are impressive sights. Baucau is home to the country’s second-largest city, also called Baucau. Here you’ll find Portuguese colonial buildings, a lively market, and a vast municipal pool fed by clear spring water. Also within the municipality is the Venilale mountain retreat that dates back to the colonial era. Excavated tunnels from World War II are close by.