Top 11 Things To Do In Mali 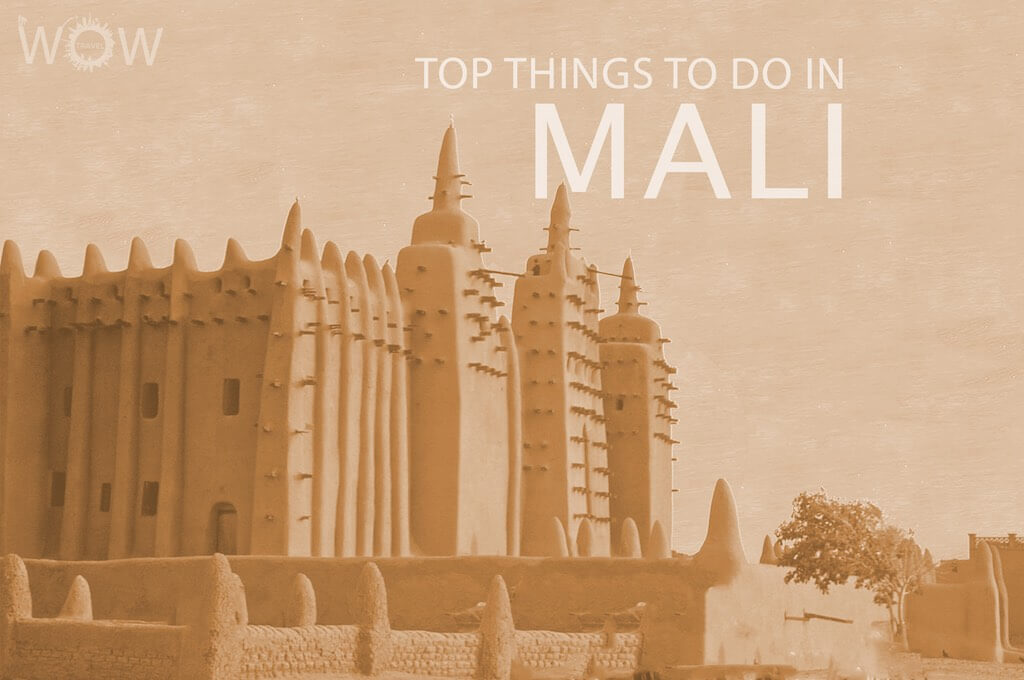 It’s difficult to imagine present-day Mali was once a dazzling center of learning and one of the three main African Empires that controlled the trans-Saharan trade. Continuous ethnic conflict in the region is a constant threat to the culture and the stability of the land and has resulted in throwing the budding economy into great disarray. Blessed with some astounding landscapes and remarkable ancient monuments, Mali is a land that is steeped in rich traditions and culture, much of which will probably be hidden from visitors until stability returns to the region. As of now, the capital Bamako is one of the safest cities to visit in Mali.

Considered as one of the greatest achievements of the Sudano-Sahelian architectural style, the Great Mosque of Djenne is one of the most iconic landmarks of Africa. The first mosque in Djenne is believed to have been built in the 14th century but the present structure on the same site dates back to 1907. The sprawling mosque right from the spired walls to the minarets are built from sun-baked bricks made from mud which have then been plastered with sand and earth-based mortar. The sticks which project from the structure help maintain the stability of the structure. Once a year after the rainy season, the entire community comes together to carry out the maintenance of the mosque. Unlike other historical monuments, the people of Djenne have refused to modernize the mosque with electricity. Barring a loudspeaker system that has been incorporated into the structure, the mosque is devoid of any other modern additions.

Rising about 500 meters above the sandy flat grounds are the sandstone cliffs of the Bandiagara Escarpment. The escarpment extends for approximately 150 kilometers and is inhabited by the indigenous Dogon people. Prior to the arrival of the Dogons, the region was inhabited by the Tellem people. During the French occupation, the Dogon were largely undiscovered because they knew their way through the natural tunnels that make up the Bandiagara Escarpment. A series of trails runs along the cliffs and visitors are escorted by local guides. However, due to the recent instability in the region, visitors are advised not to venture into this area.

Mali’s capital Bamako is the largest city in the country and the nation’s administrative center. Located on the banks of the River Niger, the city first developed on the northern side of the river but later expanded to the south. Bridges were then built to connect the two regions, the first being the Pont des Martyrs in 1957. The capital city has some interesting monuments and places of interest like the National Museum of Mali which was opened in 1953 and the Great Mosque of Bamako. Other notable attractions are the 20 storeyed BCEAO Tower, the tallest building in the country, and the Sacred Heart Cathedral. Bamako has a big music scene that exploded with the music boom in the 1990s when two musicians from the city received international fame. The city has a diverse population comprising different ethnic groups from Mali and neighboring countries.

In the middle of the 19th century four villages bearing the same first name, Segou were spread out along the right bank of the River Niger in the Segou region. Segou-Koro located about 10kms from present-day Segou became the most important of these villages with the founding of the Bambara dynasty during the 17th century. The tomb of the founder of the dynasty Biton Mamary Coulibaly is located here.  Three ancient mosques still stand tall in Segou Koro with the one on the riverbank more popular with visitors.

Mali’s southernmost region is the Sikasso region renowned for its fruits and vegetables. Due to the adequate rainfall that the region receives, most people are engaged in agriculture. The capital city also known as Sikasso, is growing rapidly as more people flee the violence along the Ivory Coast. Sikasso is famous for its mangoes and also for a vibrant outdoor market. Wassoulou a cultural area renowned for the Wassoulou genre of music, is also located in the southwest corner of the Sikasso region.

The main river of Western Africa runs in a crescent through Niger, Mali, Benin, and Nigeria. It has been the mainstay of the region for many years, as a transport route and also for fishing and farming. Its waters provide the perfect frontage to many of Mali’s cities and towns and is a beautiful place for a photo op.

Twenty km north of the River Niger is the ancient city of Timbuktu. What started out as a seasonal settlement in the 12th century soon became an important part of the Mali Empire by the 14th century. The trade-in gold, ivory, slaves, and salt helped the city to flourish, establishing it as an important learning and cultural center. However, over the centuries the city soon fell into decline as trade routes shifted, and today is a land that bears little resemblance to its past glory. Three of the oldest mosques in West Africa are found in Timbuktu as well as ancient manuscripts and books that are stored at the Centre de Recherches Historiques, Ahmed Baba, and several other libraries.

One of the three ancient centers of learning in Timbuktu is the Sankore Madrasa which along with the Djinguereber and Sidi Yahya make up the University of Timbuktu. The Sankore mosque was founded in 989 AD by the Supreme Judge of Timbuktu, which later developed into a well-known center of learning. As more and more Muslim scholars began to frequent the mosque, it began to accumulate a large collection of books which became an invaluable commodity throughout the city. The University of Sankore had four levels of learning and were awarded turbans by the end of their time here to signify their mastery.

Along the Bandiagar escarpment are the ancient dwellings of the Dogon people who have inhabited the area since the 14th century. Thirty Dogon villages are part of the escarpment with their strange shapes and structures adding an air of mystery to the land. Constructed from mud and sticks, these rectangular homes are carved into the walls of the cliffs, some blending so well into the landscape that they can hardly be detected. Prior to the ethnic violence that has shaken the region, visitors could stay in the UNESCO World Heritage villages and experience the uniqueness of their culture. Today, however, authorities advise against traveling to the region.

The highest point in Mali at 1,153 meters is Mount Hombori in the Mopti Region. The mountain with an inaccessible tableland at the top is a significant archaeological site as it has a number of caves that were inhabited over 2,000 years ago. The rugged mountain with its distinct flora and fauna used to attract a large number of tourists over the years, mainly because of its proximity to the main touristic spots of Timbuktu, Djenne and Dogon Country.

Mali’s most important port and commercial center is the region of Mopti. The bustling markets, busy river port, and small fishing villages are a huge draw for visitors to the region. The Grand Mosque of Mopti built in the early 20th century is also a remarkable landmark of the Sudano-Sahelian architecture. Over the past few years, Mopti has grown considerably because of the influx of displaced people from northern Mali.