Top 11 Things To Do In Phnom Penh 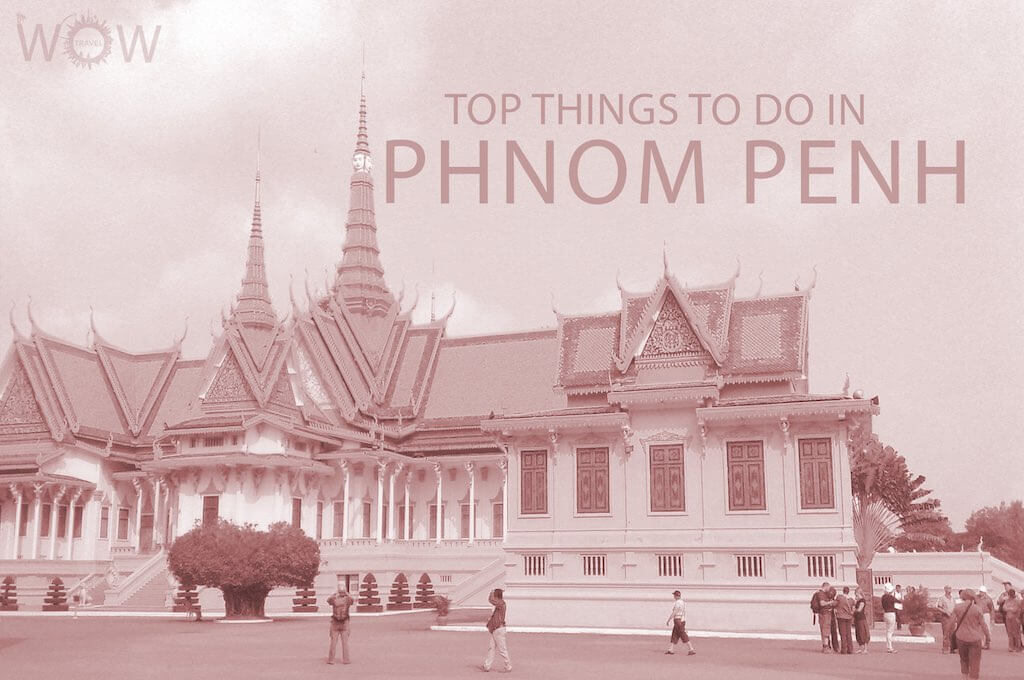 It’s easy to understand why Cambodia‘s most populous city and capital, Phnom Penh was once referred to as the ‘Pearl of Asia.’  As a French colony in the latter half of the 19th century, the riverside village was transformed into the beautiful capital city that earned it the nickname, but the wars and revolution of the late 20th century reversed much of the development. After it regained its freedom from the Khmer Rouge in 1979, the city gradually began to pick up the pieces and gain back its lost glory. Today, the beautiful glistening spires of the Royal Palace, the impressive temples, French architectural buildings, and its strategic location on the Mekong River all add to the allure and enigma of this gorgeous land.
[booking_product_helper shortname=”phnom penh”]

Phnom Penh’s Royal Palace has been the residence of the kings of Cambodia since the 1860s. After the royal capital was shifted from Oudong, the new palace was constructed above an old citadel. The palace with its classic Khmer roofs and gilded exterior is an impressive place to visit, although much of it is off-limits to visitors. The four main compounds of the palace complex are separated by walls and the throne hall and a few other buildings are open to visitors. Other notable buildings in the complex are the Moonlight Pavilion, the Silver Pagoda and the strange Napolean III Pavilion.

One of the more notable structures within the complex of the Royal Palace is the lavish Silver Pagoda, located on the south side of the complex. Also known as the Temple of the Emerald Buddha, the temple gets its name from its gleaming silver floor which has over 5,000 silver tiles. The tiles, however, are off-limits to the public but one can get a sneak peek of them at the entrance. Another striking feature of the temple is the 90kg gold Maitreya Buddha which is set with 2086 diamonds, with the largest of these being 25 carats. Various other national treasures reflecting the glory of the Khmer civilization are visible here, like the Emerald Budding atop a gilded pedestal and other impressive Buddha statues. The temple was spared demolition during the Khmer Rouge to showcase its concern for the preservation of Cambodia’s cultural wealth to the outside world. However, much of the contents of the pagoda were either stolen or destroyed during the Vietnamese invasion.

This memorial to the thousands who were massacred at the site that came to be known as ‘The Killing Fields’ of Cambodia is a tragic reminder of the horrors of the Khmer Rouge. The extermination camp of Choeung Ek located about 7.5km south of the city is where 17,000 men, women and children were transported from S-21 prison and put to death between 1975 and 1979 by the brutal regime. In 1980, the remains of 8985 people were exhumed from the mass graves at what was once an orchard. About 8000 of these skulls are housed at the 17 story glass stupa of the memorial. An annual ceremony is held here on the 20th of May to pray for the souls of the deceased.

Situated prominently on a hill, 27 meters above the rest of the city is the Wat Phnom that dates back to 1372. Legend states that Lady Penh discovered four statues of the Buddha inside a large koki tree that was carried by the Mekong River and deposited here. She later constructed a small shrine for the statues on an artificial hill, hence the name of the city Phnom Penh or ‘hill of Penh.’ A smiling statue of Lady Penh can be seen on the southwest corner o the temple and stupa. The temple is a revered site by many who come to pray for success. Over the years the temple sanctuary has undergone several renovations and was rebuilt several times. The walls are covered with murals depicting stories from the Reamker and also Jataka tales of Buddha’s reincarnations.

This 3km promenade named in honor of King Sisowath is a popular place with locals and visitors especially during the evenings. Several cafes, restaurants, bars, and hotels are located opposite this strip on the riverfront. The portion of the promenade in front of the palace is where spectators once gathered to watch the boat races during the Water Festival.

Cambodia’s largest museum of cultural history is housed in a traditionally designed terracotta structure constructed between 1917 and 1924. With a huge collection from the prehistoric era to the extensive Khmer Empire and the largest collection of Khmer art, the museum is a must for those interested in gaining a deeper insight into the country.

On Sisowath Quay is the most important temple of Phnom Penh, Wat Ounalom, the seat of the Mohanikay order of Cambodian Buddhism. Founded in 1443, the complex is made up of 44 structures. A stupa in the main complex with an inscription in the ancient Indian language, Pali, contains what is believed to be an eyebrow hair of Buddha. The complex suffered extensive damage during the era of the Khmer Rouge but has since been reinfused with life. A statue of Huot Tat, the fourth patriarch of Cambodian Buddhism is located on the 2nd floor of the main building. The statue was thrown into the Mekong when the Khmer Rouge took over but was retrieved and reinstalled in 1979.

Security Prison 21 (S-21) housed in the former Tuol Svay Pray High School was one of the most notorious prisons of the Khmer Rouge. Only seven of the 17,000 prisoners that were held here survived. The rest of the prisoners from S-21 were taken to The Killing Fields of Choeung Ek where they met with their untimely deaths, probably something they looked forward to after suffering the horrors of Tuol Sleng. The complex that has been converted into a museum is a chilling walk through another horrific chapter in history, where black and white pictures of hapless victims stare at you from the walls that were once their prison cells. Like the Nazis, the Khmer Rouge also kept records of their chilling acts and prisoners that entered S-21 were photographed often before and after their torture.

The art deco New Market with its large dome is a distinctive landmark in the capital. The market which was built between 1935-37 is an extremely popular place to pick up a good souvenir or just spend time. The central dome branches out into four wings filled with shops that sell anything from jewelry and antique coins to clothing and fresh produce. There are also plenty of food stalls for hungry shoppers.

Phnom Penh’s huge Independence Monument was built in 1958 to commemorate Cambodia’s independence from France, five years earlier. The 37 meters tall monument designed by a Cambodian architect, Vann Molyvann, is in the form of a lotus-shaped stupa similar to the central tower of Angkor Wat. The monument comes alive during national celebrations when a ceremonial flame is lit and floral tributes placed along the stairs.

The sprawling temple not very far from the Independence Monument gets its name because of its historic ties with monks in Sri Lanka. One of the five pagodas of the city founded by Ponhea Yat in 1442, the colorful Wat Langka is as important as Wat Ounalom for its Buddhist teachings and library of Buddhist scriptures. Visitors are allowed to take part in the silent meditation sessions that are held here on some days, supervised by English-speaking monks.