Top 11 Things To Do In Rabat 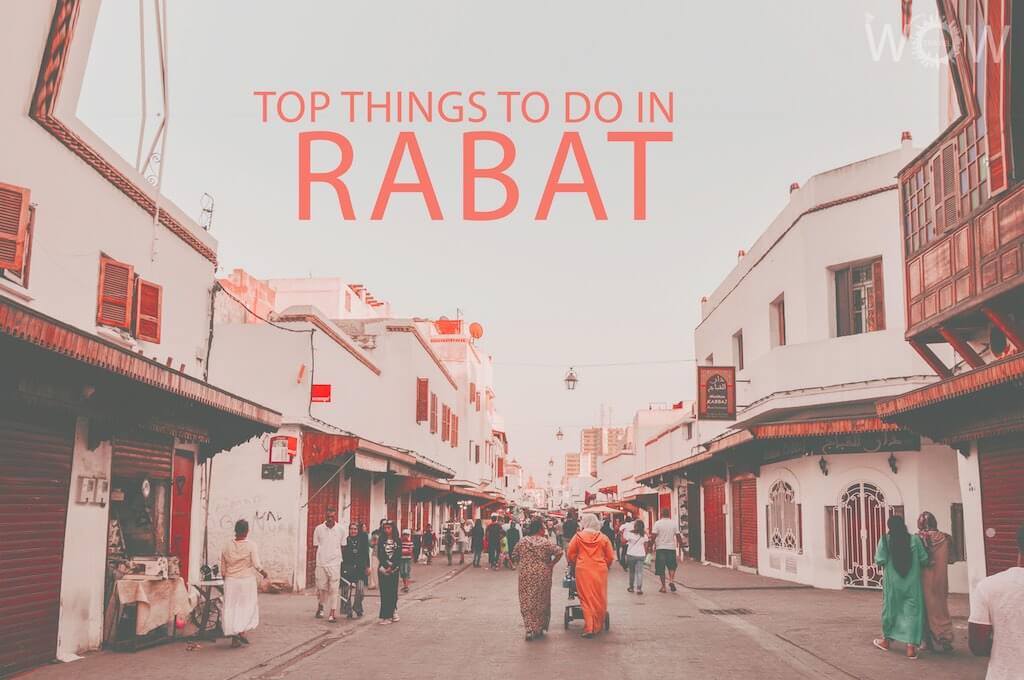 Founded in the 12th century by the Almohad ruler Abd al Mu’min, Morocco’s capital city Rabat comes as a breath of fresh air after the tourist-ridden Moroccan cities of Fez and Casablanca. The clean palm-lined boulevards and the clear roads are a pleasant surprise from the bustle of most tourist cities in this part of the world. It’s hard to imagine that the city was once a haven for Barbary Pirates who used it as a base for launching attacks. It remained under the power of the pirates until the first quarter of the 19th century. Despite its rather tumultuous past, one of the four Imperial Cities of Morocco has quite a few beautiful areas that are worth exploring like the intact Medina, a World Heritage Site and an evocative Kasbah.
[booking_product_helper shortname=”rabat”]

Before the French came to Rabat in 1912 the walled medina was the full extent of the city. The medina was built in the 17th century by the Andalusian Muslims when they fled from Badajoz in Spain. The bustling medina with its traditional shops, streets, and cafes can be explored in half a day but one can easily get lost in its labyrinth of alleyways. Rabat’s medina is, however, more easily explored than the larger medinas of Fez and other Moroccan cities. Within the medina, visitors can also visit the Jewish quarter (mellah) and the site that was used for slave auctions during the days of Salle Rovers.

This Medieval fortified necropolis dates back to the 14th century to the Merenid sultan Abou Al Hassan Ali. The area, however, was first occupied by the Phoenicians in about 40 CE and then by the Romans who named it Sala Colonia. It was the center of Christianity from the 2nd century but continued to be occupied by the Romans until the end of the 5th century. All that remains of the Roman city is some scattered stones. The area was abandoned in 1154 and lay vacant until it was taken over by the Abou Al Hasan Ali whose tomb lies within its environs. Hasan Ali built the defensive walls of the necropolis and an impressive mosque which was lost to the ravages of time. All that remains of the mosque is one minaret. Other ruins of the once important Islamic complex like the medersa and ornamental pool can also be explored. The annual ‘Jazz au Chellah’ festival is held at the Chellah in September.

One of Rabat’s most distinctive landmarks is the 44m Hassan Tower, overlooking the Bou Regreg estuary. The tower formed part of an ambitious project to build the second-largest mosque in the world by the Almohads. However, before the project could be completed its patron Sultan Yacoub Al Mansour died. A subsequent earthquake in the mid-18th century completely destroyed the mosque, leaving behind the grand tower and numerous shattered pillars as a testament to its grandiose.

Across from the Hassan Tower is the Mausoleum of Mohamed V completed in 1971 on orders from King Hassan II for his late father, Mohamed V. The beautiful marble mausoleum stands out with its white walls and green tiled roof. Patterned mosaic tiles and carved plaster add to the allure of the final resting place of the kings. Visitors are allowed to view the beautiful tomb room that is lit up with chandeliers and adorned with red carpets

The historic citadel of Rabat located at the mouth of the Bou Regreg river attracts many visitors because of its uniqueness. Built during the reign of the Almohad Caliphate, the narrow streets with their blue-bordered whitewashed houses make up the quintessential photo of Rabat. The residential streets are relatively quiet so exploring them becomes even more enjoyable. One can avail of some amazing views of the Atlantic Ocean and Sale from the highest point of the Kasbah. The oldest mosque in Rabat is also located within the Kasbah. Originally built in the 10th century it was restored in the 18th century with donations from an English pirate. Other notable attractions within the Kasbah are the Andalusian gardens and the Oudaias Museum, housed in the 17th-century palace.

The massive Almohad gate of Bab Oudaia provides the most dramatic entry to the Kasbah. Built in 1195, the gateway is an elaborate masterpiece of carved arches which opens out into the heart of the city. Its position and location made it more ceremonial than defensive. However, these days the gate is rarely open to visitors so the entry to the Kasbah is through a much smaller gateway.

The quiet Andalusian Gardens with their fruit trees and bougainvillea located within the Kasbah are a favorite place to hang out for locals and visitors to the city. The gardens that were built by the French are remnants of the colonial era.

This recently restored market in the old medina is a popular place for tourists. Besides the regular market goods, the covered market has many shops that specialize in jewelry and leather goods. However, Medina’s souq is much quieter than the souqs in Tangier or Fez with fewer people trying to cajole you to buy their goods.

Construction on the beautiful Art Deco Roman Catholic cathedral began in 1919, and the cathedral was inaugurated in 1921. The two towers were added later in the 1930s. St. Peter’s Cathedral is still operational with mass being celebrated every other day. The architecture and serenity of the place are worth a visit.

Rabat’s beach is a gentle curve of sand just near the Kasbah. Although the place gets extremely crowded in the summer, it’s relatively quieter the rest of the year-round. The place may not be the best for relaxing but there’s no denying the great views of the Atlantic that it offers. If you have more time on your hands and are prepared to travel a few miles out of the city, there are plenty of quieter beaches along the coastline that offer the ultimate beach experience.

One of the locations for the film ‘Black Hawk Down,’ the historic city of Salé just across the Bou Regreg river from Rabat was more of a commuter town than a popular tourist destination. However, in recent years, the city is witnessing a rebirth of sorts with large scale development ensuring that it has now become an integrated part of the capital. More conservative and traditional than Rabat, the city dating back to the 11th century was founded by the Arabic speaking Berbers but later became a haven for pirates. The city has its fair share of attractions, like the Grande Mosque, the Slave Prison and the medina, to name a few. Salé has played a vital role in Morocco’s history, having the distinction of being the site where the first demonstrations took place.