Top 11 Things To Do In Salzburg 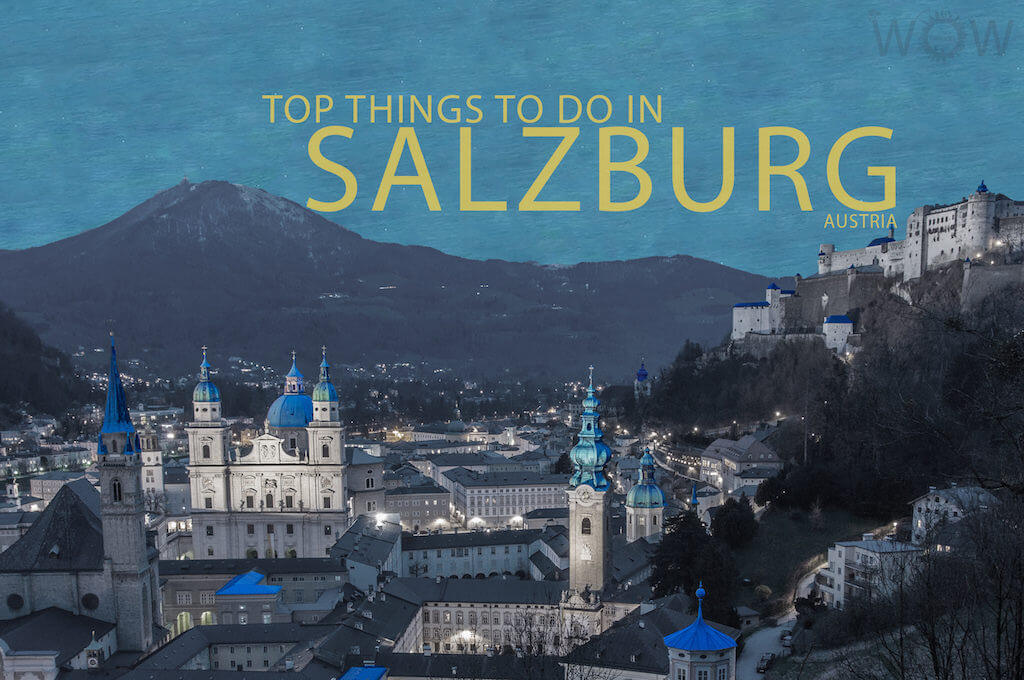 Salzburg, the fourth largest city of Austria and one of the lesser-known, is arguably the most beautiful. This historic city on the banks of the Salzach River looks like it has been taken out of fairy tale, and those with a romantic, yet sophisticated mindset will feel right at home. Salzburg is where Mozart was born and the city still remains a top cultural and arts capital to this day. From rich history and culture to awe-inspiring architecture and breathtaking Alpine surroundings. Check out the Top 11 Things To Do In Salzburg.

Standing high over the city of Salzburg atop the Festungsberg hill, the magnificent Hohensalzburg dominates the city, being its main tourist attraction. The castle, built in 1077, is Europe’s biggest fortification and probably the most beautiful. Inside the castle, there is a permanent Fortress Museum and on a guided tour you will hear plenty of interesting information about the castle itself and you can gain some authentic insights into medieval life in Salzburg.

Salzburg Cathedral, the most significant sacred building in the city, has dominated the townscape for almost 400 years. The cathedral is the visual and spiritual centre of the Old Town of Salzburg. This was the place where Mozart’s parents, Leopold and Anna Maria, were married on 21 November 1747.

St. Peter’s, the church of a Benedictine abbey, was founded by St. Rupert who is buried inside. It is the final resting place for a number of famous personalities, artists, scholars and businessmen such as Sanction Solaria (architect and builder of Salzburg Cathedral) and Mannerly Mozart (Mozart’s sister). The Baroque Hall in St. Peter’s Monastery Cellar and the Romanesque Hall are used regularly for concerts such as the “Mozart Dinner Concert” and the “Mozart Piano Sonatas”.

The Franciscan Church is one of the oldest in Salzburg, and it is thought to be older even than the cathedral itself. It was built in the 8th century and later rebuilt in late-Romanesque style in the 13th century. The Romanesque choir was replaced with a Gothic one in the early 15th century, and a Gothic tower was built between 1468 and 1498. The interior of the church was decorated in baroque style in the 18th century.

The exquisite Palace of Mirabell (Schloss Mirabell in German) was built by Prince Archbishop Wolf Dietrich in the Baroque Style in 1606. It is also famous for its beautiful, geometrically arranged gardens, one of Europe’s most beautiful Baroque gardens. Positioned throughout the garden are sculptures and water features by some of Austria’s best known artisans.

Salzburg’s Old Town is internationally renowned for its baroque architecture and is one of the best-preserved city centers north of the Alps. It is one of only 8 UNESCO World Heritage Sites in Austria. Explore the narrow medieval streets and arcaded courtyards and enjoy the beautiful Alpine setting.

Hellbrunn Palace, built in 1619 and popular for its exquisite gardens. This palace, originally a summer residence for the archbishops of Salzburg, is famous for the whimsical water games of the Trick Fountains. Also worth a visit are the Neptune grotto, the Venus grotto or the Goddess Diana fountain. The Hellbrunn Palace grounds are a great place for a stroll in quiet, natural surroundings.

The Red Bull Hangar-7 at Salzburg Airport is a unique architectural work of art with a collection of 25 historical airplanes, helicopters and Formula One racing cars. It is Homebase for the historical aircraft “Flying Bulls”, high-class gastronomy and other modern art exhibitions.

Take a trip on the Funicular Railway to the top of the hill at Mönchsberg and admire the view from the M32 restaurant. At dusk the view is even better.

A half-hour drive from Salzburg is the picturesque village of Werfen, home to the largest ice caves in the world (Eisriesenwelt). Partly due to its isolated location in the high mountains and the lack of interest in cave exploration back then, this underground world of natural ice sculptures and formations was completely unknown until the end of the 19th century. The system of caverns stretches over 42 km (26 miles), the first km featuring gigantic ice formations and it is open to the public and can be viewed on a guided tour.