Top 11 Things To Do In Zurich 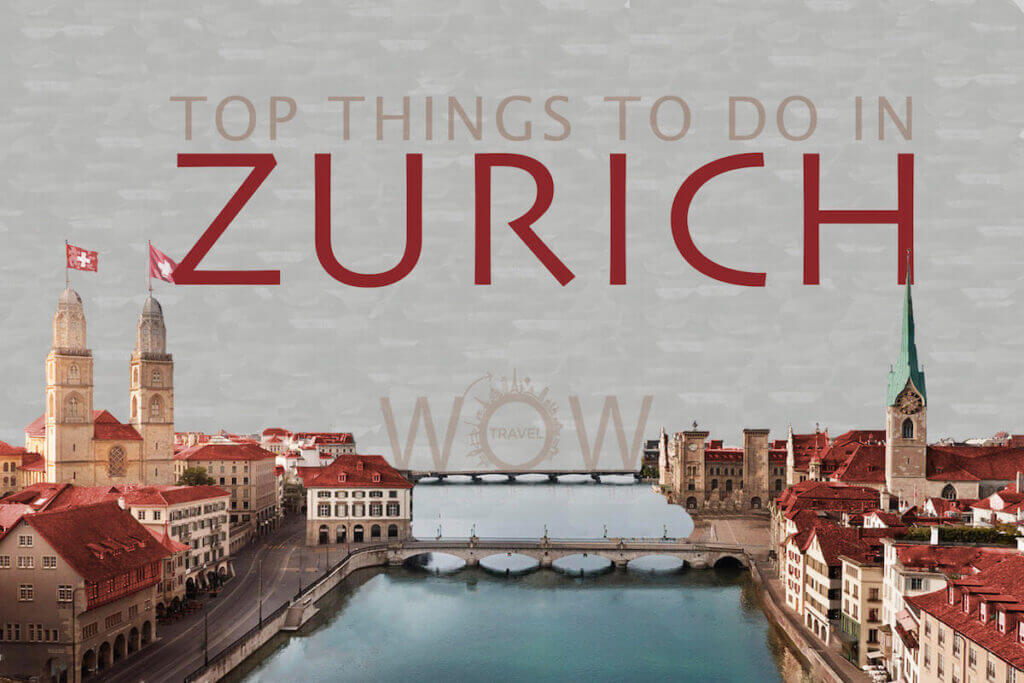 For business or pleasure, Zurich is always a good place to visit if you want to enjoy the best of the best of Europe. Exquisite cuisine, 5-star hotels, astounding spas, phenomenal bars, cocktail lounges and breathtaking views all around you. Although it may only have 400,000 inhabitants, Zurich’s airport receives more than 20 million passengers annually. Switzerland is not a cheap destination but it does not mean you will have to spend a small fortune to enjoy a nice vacation in Zurich. You need to know that this gorgeous city has been named 6 times as the city with the highest standard of living in the world so come ready to enjoy life, to taste delicious wines and to explore Swiss culinary traditions (there is one restaurant for every 180 inhabitants) and to meet really amiable, polite and well-educated people. So cultured that they are among the few people who still study and use Latin these days. This city has too much to offer but WOW Travel tried to highlight The Top 11 Things To Do In Zurich, Gute Reise!

“You go to a place for a visit and deep in your heart you think that this place can be your own home and Zurich is such a place!” ― Mehmet Murat ildan

Nothing better than starting the day looking at this wonderful body of water. It is simply magical. Sports lovers, couples, families, everyone has many options when it comes to having fun and enjoying the lake. A simple and relaxing stroll on the green lake shore or delicious traditional restaurants. In the summer, there are plenty of water sports schools and in the winter ice-skaters can polish their skills at the ice rinks in Küsnacht and Wädenswil. Another great option for tourists is to enjoy special moments on one of the special cruises of Lake Zurich while having a BBQ Swiss-style or an afternoon tea with fondue.

Wear comfortable shoes and go to the Old Town to get a real sense of what Zurich is. It is divided into areas and each one of them has something different to show. The Lindenhof quarter corresponds to the mindere Stadt, the smaller but more prestigious half of the medieval town left of the river. The Niederdorf is a popular promenade in Zurich’s Old Town and it offers interesting sights, culinary delights and shopping for all styles of tourists. There is more to see but we want you to explore and tell us about it!

It is definitely Zurich’s most famous landmark filled with stories and legends, locals say that this church was built on the graves of the city’s patron saints, Felix and Regula. This Protestant church was designed in the Romanesque style  and it is considered one of the main churches in the city. The construction of this religious building was ordered by Charlemagne and they began to build it around 1100 and it opened its doors to the public around 1220. The twin towers of the Grossmünster are considered as the most recognized landmark in Zurich.

Switzerland‘s most visited museum by tourists and locals alike. It displays the country’s history from its origins to the present day as well as a broad range of special exhibitions. Archaeology. Treasures of the Swiss National Museum, Swiss homes & furnishings, Christmas and Nativity Scenes – the Christmas exhibition at the National Museum Zurich and more. It is one of the most important art museums of cultural history in Europe so we encourage to pay a visit.

The guardian mountain of Zurich as some call it, located in the Swiss plateau. It is the best spot to get the most wonderful and breathtaking panoramic views of the entire city of Zurich and the lake. The summit is easily accessible by train from Zurich or there are many walking paths leading up to the top from as well for those in good shape or adventurers. You could spend the night at the Uto Kulm Hotel, situated on this mountain, and enjoy the majestic view over the rooftops of Zurich. We stayed here and we were treated like royalty and enjoyed all imaginable comfort amidst the pristine natural landscape of Zurich. We highly recommend it.

Or Zurich Zoo is being open since 1929 and it is home nowadays to more than 2200 specimens of 300 species. This is not just a place for families  but for everyone who loves life and animals. After seeing the penguin parade, which is performed daily afternoon, you will want to come back every day. There are many restaurants and excellent facilities, it is open 365 days a year from 9am to 6pm.

This museum offers a vast Asian, African, American and Oceanian art. It is the only art museum of non-European cultures in Switzerland and the third-largest museum in Zürich. It is a fascinating group of several historic buildings: the Wesendonck Villa, the Remise, the Rieter Park-Villa, and the Schönberg Villa. Among its current exhibits are The Cosmos – An Enduring Mystery, World In Colour – Colour Photography Before 1915 And Sculpted Sound – Stringed Instruments From India.

The museum’s collection includes major works by artists including Monet, Edvard Munch, Jacques Lipchitz and Alberto Giacometti. Swiss artists such as Johann Heinrich Füssli, Ferdinand Hodler or from recent times, Pipilotti Rist and Peter Fischli are also represented. It houses one of the most important art collections in Switzerland and Europe with pieces from the Middle Ages to contemporary art, with an emphasis on Swiss art. Just jump on the tram and get off at the stop known as Kunsthaus located on Pfauenplatz, between the museum building and the Schauspielhaus Zürich.

It is without a doubt one of the most prominent theaters in the German-speaking world. It can receive up to 750 spectators. This building has gone through many changes and served many purposes since it was built in 1892. It was the People’s Theater with a Bavarian beer garden and a bowling alley;  it served initially as a music hall or vaudeville stage and in 1901 it was rented by the director of the Zürich Opera House and opened as a playhouse for one of Goethe’s comedy.

Fraumünster (Church of Our Lady)

“The Fraumünster is famed for its incredibly colorful stained-glass windows designed by Marc Chagall. The church was, however, built a long time before the window was created and was a present from Ludwig des Deutschen to his daughter, who was the first Abbess of the ladies’ chapter. Not only did she rule over extensive territory, she also had a private mint; however, only the cloister and church with its romantic choir and Gothic nave were spared the wrath of the Reformation. The tower on the left-hand side of the building was erected in 1732 and presents a refreshing antithesis to the nearby twin towers of the Grossmünster.” Source: Marriott.com