Top 12 Things To Do In Avignon 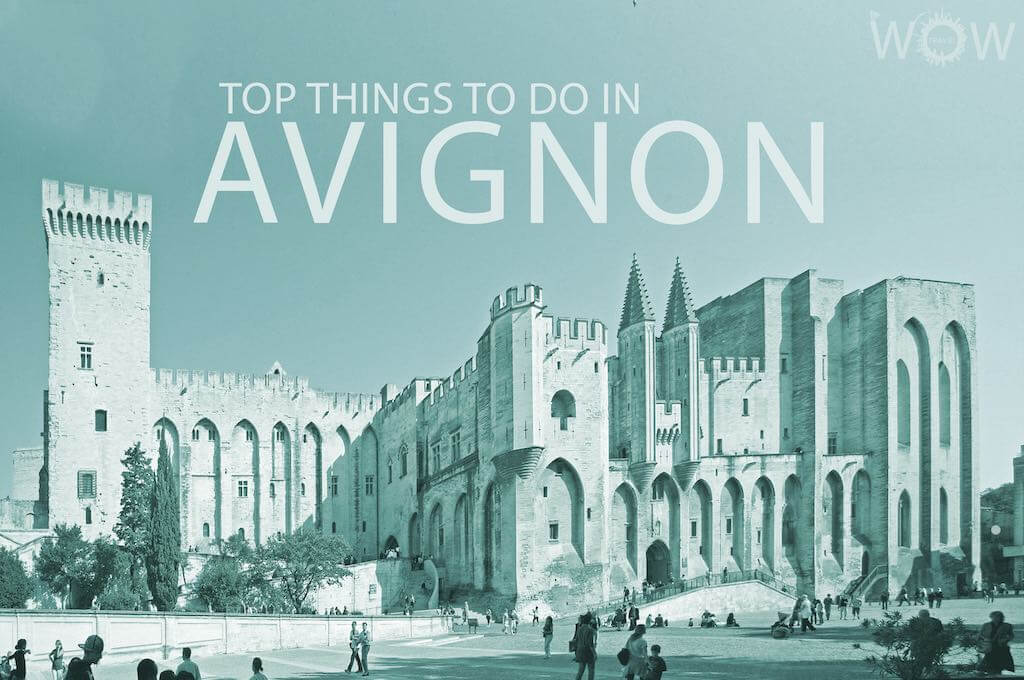 Avignon is a beautiful city located on the banks of the Rhône river. For many years, but mostly during the 14th century, it was the capital of Christianity after Pope Clement V moved himself and his court to the small city. Today, the city which has its own song has much of the original architecture, giving a medieval feel when walking through the streets.  If you would like to find out what you should be doing when visiting Avignon, then you should continue reading this article.

The Palais des Papes, which translates to ‘Palace of the Popes’ is a large medieval Gothic-styled building which was once a fortress and a palace. The Palais consists of two adjoining buildings; the old one of Benedict XII and the new of Clement VI. In 1995, the Palais which sees over 600,000 visitors a year, was classified as a UNESCO World Heritage Site.

The Rocher des Doms is located on top of a hill on the banks of the Rhone River. At the top of the hill is the manicured garden known as ‘Jardin des Doms.’ It offers amazing views of both the river and parts of the city of Avignon. The garden has a large pond with a beautiful fountain of a woman in the middle, where many ducks and koi can be seen swimming.

The Pont Saint-Benezet, also called the Pont d’Avignon is a medieval bridge which was built in 1234 as a replacement for the wooden bridge that was destroyed during the 20-year Albigensian Crusade. The bridge spans the Rhone, one of the major rivers in France, and today is a UNESCO World Heritage site, which inspired a 15th-century song.

The Place de l’Horloge, which translates to Clock Tower Square, is the main square in the city of Avignon. The city hall, opera house, outdoor restaurants, and cafes are some of the buildings located on the square, and it is also the venue for the town’s annual ‘Festival d’Avignon.’ There is also a carousel at one end of the square that is lit up at night.

The Place du Palais, otherwise known as the Square of the Papal Palace is a large square where many of Avignon’s most famous landmarks are located. The Palais des Papes, the Notre Dame des Doms, the Hotel des Monnaies (one of the 11 Best Hotels in Avignon), and the Petit Palais Museum are all situated around it. Also, the square which has is the location of many of the town’s historic events.

Basilique Saint-Pierre d’Avignon, also known a St. Peter’s Basilica, is a Gothic-style church located in St. Peter’s Square, in the center of town. Its construction began sometime during the 7th century, but it was only completed in 1524. Three decades later, it was classified as a historical monument, and in 2012, Pope Benedict XVI conferred on it the title of minor basilica.

Le Halles Market is a covered market built near the end of the 19th century in the center of Avignon. It is estimated that the market has 40 stalls which sell a variety of local produce from bread, fruit, and vegetables to a booth dedicated explicitly to cheese. The market has been a meeting place for people for more than a century but faced some competition due to commercial development nearby.

Ille de la Barthelasse, which translates to Barthelasse Island, is located between Avignon and Villeneuve Les Avignon on the Rhone river. It was once an archipelago, but construction has left it as one of the remaining islands. The Ile de la Barthelasse is a popular hotspot for Sunday picnics, family bike rides, and for those just wanting some peace and quiet.

The Rue des Teintures, also known as the street of waterwheels, is a beautiful cobblestone street that follows the Sorgue from the Rue des Lices to the city walls. From the 14th century to the 19th century, the paddle wheels supplied energy for to the mills in the nearby town. Today there are less than 10 of them left, but the nickname was well earned.

The Opera d’Avignon has been in operation for almost two centuries, opening for its first performance in October 1825. A few years later, it was destroyed in a fire but was rebuilt within a year after. The beautiful opera house features a genuine black box, balconies, and dress circles and it can comfortably hold 700 spectators.

The Musee de Petit Palais, which translates to the ‘Small Palace Museum’ is a museum and art gallery which houses a fantastic collection of Renaissance paintings. There are just over 1000 works of art inside some of which were created by Sandro Botticelli, Vittore Carpaccio. Among the 600 sculptures is the effigy head of the tomb of Antipope Clement VII.

The Fort Saint-Andre is a medieval fortress which dates back to the 14th century. Commissioned by Philip the Fair, the fort was built years later under the leadership of John the Good. During the 18th and 19th centuries, there was a garrison, a prison, and a court of justice. Because of its location and the height of its walls, it offers excellent views of the city below.