Top 12 Things To Do In Bilbao 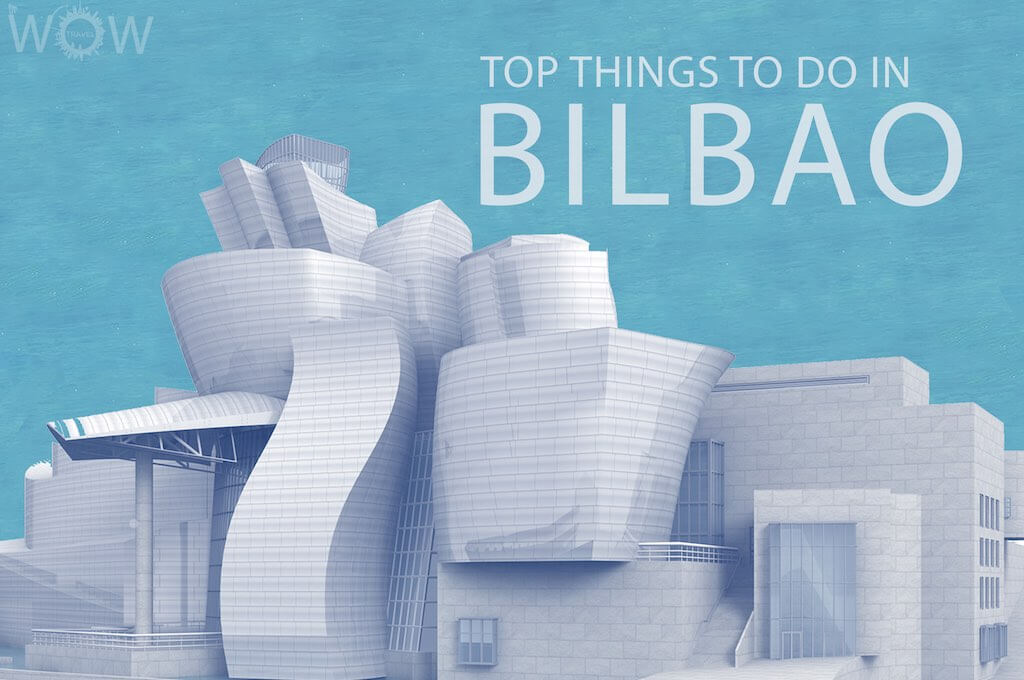 Bilbao, the largest city in the Basque region in northern Spain was once a main industrial hub and a minor beach destination. However, the inauguration of the Guggenheim Museum in 1997, brought the tourists flocking to this part of Spain. The deindustrialization of Bilbao began in the 1990s when many of the industrial areas were transformed by several renowned architects and artists of the world. The number of museums and the many Michelin star restaurants that the city boasts of are an indication of how culturally rich the city is. From visiting churches, exploring museums and parks to walks along the riverfront, there is much to see and do in Bilbao.
[booking_product_helper shortname=”bilbao”]

The iconic structure of the Guggenheim Museum draws tourists to it like a magnet. Designed by world-renowned architect, Frank Gehry, the old dock and wood warehouse were transformed into a masterpiece. The titanium and glass-clad building with its flowing lines and random curves is hailed as one of the most important architectural structures in the past 30 years. There are 20 galleries within the museum which exhibit an extensive collection of contemporary art. The art installations outside the museum are also worth seeing. Most famous among them is the giant topiary dog called Puppy by Jeff Koons and the gigantic spider, Maman, by Louise Bourgeois.

This multi-purpose venue was once a former warehouse previously known as Alhondiga (corn exchange). It was renamed Azkuna Zentroa in March 2015 as a tribute to the late mayor of Bilbao, Inaki Azkuna. The old building was redesigned by French designer Phillippe Starck who transformed everything except the exterior. The venue was opened to the public in 2010 as a “Culture and Leisure Centre.” The glass-paneled swimming pool on the upper floor and the 43 columns that hold up the building are worth seeing.

If you’re looking for a bit of culture, the Arriaga Theater is the best place to experience it. The 19th-century theater which stands at the entrance of the Old Town, stages various operas, theater performances, and music concerts. This beautiful neo-baroque landmark was destroyed twice, once in a fire in December 1914, and the second time when floods inundated the city in August 1983. The building was restored and reopened in December 1986. The theater is named after the composer Juan Crisostomo Arriaga, referred to as the ‘Spanish Mozart.’

If you want to take a step back in time, Casco Viejo is another great place to do it. The colorful buildings, old streets and historical structures that make up this part of Bilbao will definitely transport you back in time. Until the end of the 19th century, Casco Viejo used to be the walled part of the town. It is connected to the New Town (Ensanche) by five bridges. Also known as Las Siete Calles or The Seven Streets, the oldest part of the town is the best place to soak in the essence of the town’s history.

Dedicated to the apostle St. James, the original shrine used to be a popular stopover for Jacobean pilgrims on their way to Santiago de Compostela. The Cathedral of Santiago was rebuilt in the 19th century after the old church was originally destroyed by a fire in 1571. The façade and spire are of the Gothic Revival. Even if you aren’t an architecture buff, the majestic interiors of the church, especially the choir stalls and cloister will leave you marveling at the beautiful details.

Located in the heart of the Old Town, the Ribera Market is Europe’s largest indoor market. The marketplace which was built in 1929, made it to the Guinness Book of Records in 1990 for being the most complete municipal food market. A popular destination for local shoppers and chefs, it’s a great place to visit if you want to experience the everyday life of the city. If you’re looking for the best quality culinary Basque products, gourmet food products or fresh fruit, this is the place to go. The market also has several food stalls where you can feast on some local cuisine.

The Basilica de Begona is dedicated to the patroness of the city, the Virgin of Begona. Situated at a higher level above the Old Town, the church was built in the 16th century. If you prefer walking, you can use the footpath from the bottom which will take you at least 20 minutes to reach the top of the hill. The other easier option is to use the lift behind the Church of San Nicolas. From this location, you can marvel at a spectacular view of the city.

Located in the Old Town, the Plaza Nueva is a popular destination for tourists who want to take in the surroundings or find the perfect pintxo which Bilbao is so famous for. Many restaurants, outdoor terraces, and cafes are found in this typically Spanish monumental square which is enclosed by elegant arcaded buildings. There is a regular collector’s market here on Sunday mornings where you could probably pick up a good souvenir.

The beautiful design of the Palacio Euskalduna is considered to be a very important example of contemporary architecture in Spain. The building has been designed to resemble a ship, symbolic of the last vessel to be built at the Euskalduna shipyard. The auditorium of the theater which is well known for its excellent acoustics is the second largest in Europe. Besides the auditorium, there is a conference center, concert hall and opera house. The Michelin-starred Etxanobe Restaurant is also located within the complex.

For a spectacular view of the Port of Bilbao and the Abra Bay, ride the lift to the top of the Vizcaya Bridge and feast your eyes from the pedestrian walkway at the top. The Vizcaya Bridge which was declared a World Heritage Site in July 2006, is commonly called the Puente Colgante by locals, which literally means ‘hanging bridge.’ The world’s oldest transporter bridge was designed by Alberto Palacio to provide a practical and viable solution to connecting the towns of Getxo and Portugalete without disrupting the maritime traffic of the Port of Bilbao.The novelty of your visit to this site will possibly be the one and a half minute ride in the suspended gondola which can transport 6 cars and several dozen passengers across the river.

A ride in the funicular to the top of Mount Artxanda is definitely worth the experience. The cableway which was opened in 1915 takes only three minutes to reach the top of the mountain through the hillside of the Arangoiti district. The spectacular panoramic views of Bilbao are popular with tourists and locals. The recreational area and park at the top are also great places to unwind. You can enjoy a walk around the area of the summit or have a bite at one of the restaurants there.

Parque Dona Casilda is a good place to unwind after a long day in the city. The beautiful fountains and neoclassical statues which adorn the park make it a lovely place to relax. Another attraction of the park is the ducks that inhabit the large lake, which is also a good spot for rowing boats. This English-style garden which at one time was the only lung of the city was created more than 100 years ago. Much of the park’s space was lost during the 20th century to the Fine Arts Museum which was constructed entirely inside one end of the park.