Top 12 Things To Do In Calgary 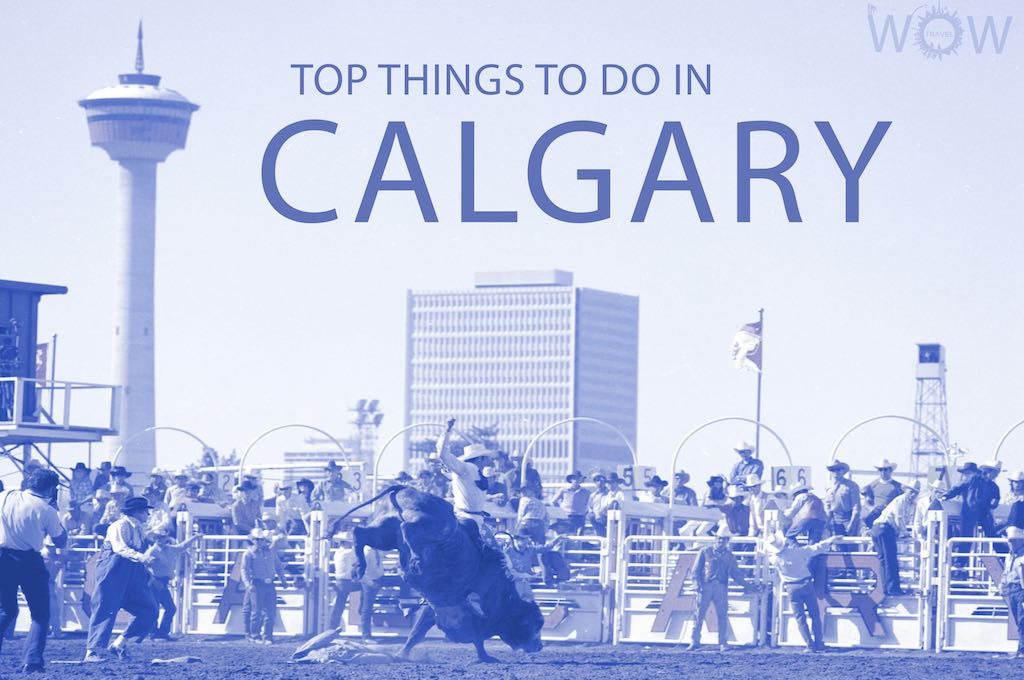 Nestled alongside the Bow River and perched at the foothills of the Canadian Rockies, Calgary is the fifth largest city in Canada. Located in the province of Alberta, the city of Calgary has often made it to the top of the list of the cleanest cities in the world. Many people visit Calgary to hit the slopes during winter or to experience the cowboy culture of this city often referred to as a ‘cowboy town.’ However, there is much more to experience in the city than the Wild West and ski slopes.
[booking_product_helper shortname=”calgary”]

To get a feel of Calgary’s Wild West this living history museum located near Glenmore Reservoir will take you back in time. The Heritage Park which is spread over 127 acres, is a great place to visit with kids as there is a lot about the history of Calgary they can learn in a fun way. Interact with the costumed staff who reenact the bygone era or explore a replica of the 1860s fur trading post, a ranch and a historic village that are all running. You can also enjoy a ride on a horse-drawn wagon or in a steam locomotive. The park is closed during the winter but is open every day from May to September.

Spruce Meadows is a top-notch equestrian facility that hosts some of Canada’s most important horseback riding events. Opened in 1976 by the Southern Family who built it, this riding arena gets its name from the spruce trees that surround it. At the Spruce Meadows, you can get to witness some live-action if a tournament is in progress or get up close and personal with the horses when you tour the stables. You can also explore the beautiful grounds.

The Calgary Zoo is located on St. George’s island downtown of the Bow River. The zoo has many diverse species among the 1,400 animals that are housed here. If you are a lover of animals or traveling with children, a day at this zoo should definitely be on your itinerary. Seeing the animals in huge enclosures which replicate their natural habitats, or exploring the Prehistoric Park showcasing the region’s history as a stomping ground for dinosaurs, will definitely add to the experience of your visit. A sprawling botanical garden is also a part of the zoo’s complex.

The massive sports complex which was the venue for the 1988 Winter Olympic Games is used throughout the year by young athletes. Located northwest of the city along the Canada Olympic Road Southwest, the park is a very popular destination for sports enthusiasts. There’s a lot that you can try here with ski lessons available for youngsters and adults. However, if you lack the energy to hit the slopes, you can also visit the Olympic Hall of Fame and Museum which is located here.

If you want to unwind, this park in the middle of the city is where you should head. Prince’s Island Park is named after the founder of a lumber mill, Peter Anthony Prince who donated the land to the city in 1947. The park which is on the Bow River is linked by three bridges from various parts of downtown Calgary. Walkers and bikers enjoy the trails which are lined with cottonwood trees. The park is also a popular venue for outdoor concerts and plays in the summer.

For a spectacular view of the city head to the Calgary Tower located in the heart of downtown Calgary. The tower which was built in 1967 was once the tallest building in the city, standing at approximately 191 meters (626 ft). The top of the tower has a revolving restaurant and a viewing platform which offers a fantastic panoramic view of the Rocky Mountains and the city.

Dubbed a National Historic District, the pedestrian-only area of Stephen Avenue Walk is one of the most popular shopping avenues in the city. Occupying three blocks of downtown Calgary’s 8th Avenue, the area is throbbing with life. Several nightclubs, restaurants, and fashionable stores line the street. Stephen Avenue is also a great place to experience the local culture of the city as the area is popular with local artists and street performers. The iconic Galleria Trees sculptures installed in 2000, stand prominently between 2nd and 3rd street.

This is the venue for the most important festival in Alberta held in July every year. The Calgary Stampede is a world-famous festival celebrating the western heritage of the region, which runs for ten days. Featuring rodeos, chuckwagon races and various kinds of cowboy-style entertainment which includes a parade, the whole city of Calgary comes out to celebrate this festival. However, even when the festival is not on, Stampede Park is still a good stopover for cowboy enthusiasts as the park hosts horse and trade shows throughout the year.

Home of the National Hockey League team, Calgary Flames, the Scotiabank Saddledome is the place to head to if you are in Calgary between the months of October to April. You’ll get a chance to be a part of the excitement of watching a fast-paced hockey league game here. The multi-use indoor arena is also used for special events like rodeos, concerts and important conferences during the off-season.

Fort Calgary was built in the 19th century to house the North West Mounted Police who were created to control the illegal whiskey trade and to establish relations with the indigenous people of the territory. The original stronghold was buried for over 60 years under a warehouse yard until it was unearthed in the 1970s. The foundations of the original fort are still visible.

If you want to enjoy a day of thrills then head to the largest outdoor family amusement park in Western Canada. Calaway Park is located on the Trans-Canada Highway, 4 km west of the city of Calgary. Since its opening in 1982, the park is a popular destination for families and youngsters. Covering an area of 90 acres, some of the attractions of the park are the ‘Dream Machine,’ a 56 passenger swing ride and ‘The Vortex,’ a corkscrew roller coaster. There are a total of 33 rides and 27 games. The park also has a good number of food stalls for you to whet your appetite.

Located on the top floor of The Core Shopping Center on Stephen Avenue, this botanical garden is a pleasant surprise. The indoor park which was opened in 1977, covers an area of 2.5 acres and is completely enclosed with glass. There are over 500 trees, 50 varieties of plants, a Koi pond, a play area for children and an 83.6 square meters (900 square ft) living wall. Entry to the Devonian Gardens is free.