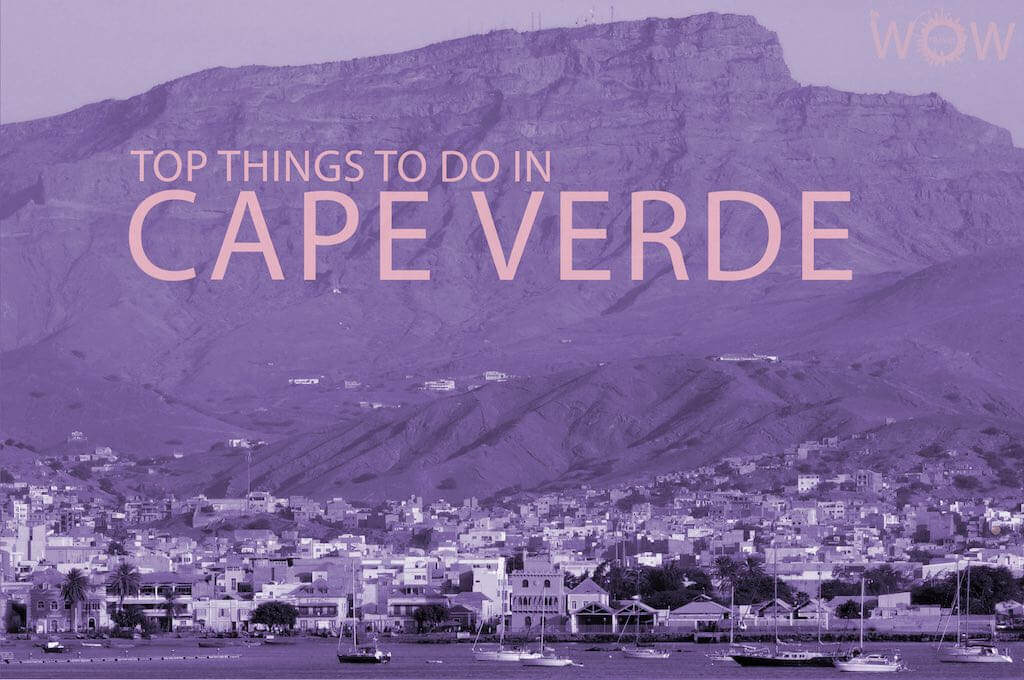 The island country of Cape Verde is an archipelago of 10 volcanic islands that remained uninhabited till the 15th century. The archipelago was discovered and colonized by Portuguese explorers who established the first European settlement in the tropics. The archipelago of Cape Verde which forms a part of Africa is located in the center of the Atlantic Ocean. Characterized by vast expanses of golden sands and calm waters, Cape Verde is a beach lover’s paradise. However, there is much more than beaches and water sports to discover on the islands that make up Cape Verde.
[booking_product_helper shortname=”cape verde”]

This beach paradise is one of the most popular islands for visitors who come here to enjoy the local culture and relax on the spectacular beaches. The capital Espargos is located at the center of the island but much of the activity happens along the golden beach, south of the island. Water sports enthusiasts can have the time of their lives diving, snorkeling, wakeboarding or jet skiing. Sal is also one of the more barren islands of Cape Verde with a large expanse of dry desert. One of the high points of visiting the Sal desert is to experience the impressive Terra Boa mirage which can trick you into believing that the ocean has inundated the large expanse of sand.

Discover a large part of Sal’s salt history at Pedra de Lume. The old volcanic crater has a beautiful lake and a large expanse of salt pans that were started in 1796. You can visit the salt flats and also view the large conveyor system which was used to transport salt at one time. If the Dead Sea is on your bucket list of places to visit, you can have a trial of what it feels like to float in a salty expanse by taking a deep in the pool at the Pedra de Lume.

The town of Santa Maria is located about 15 miles (20 Km) south of the capital of Sal and is one of the most popular tourist destinations on Cape Verde. Popularly known as the ‘African Caribbean,’ the cobbled streets lined with brightly colored buildings, interspersed with the green of the palm trees are ideal for a leisurely stroll. The 2 km long beach of Santa Maria is one of the most popular beaches on the island, ideal for water sports or sunbathing. You can also opt to go horse riding on the beach if water sports are not for you. Santa Maria beach is also another nesting spot for loggerhead turtles.

If you are a freeride enthusiast looking to ride the waves with the help of a kite, then head to the east coast south of Sal. Kitebeach isn’t hard to locate with the number of multicolored kites soaring in the sky. The big lagoon extends far enough for all enthusiasts to enjoy the space. There is also a reef 300 meters from the edge for wave enthusiasts. Kite lessons are also on offer for beginners wanting to try something new.

Boa Vista is the third largest island of Cape Verde and the most barren of all the islands with more stretches of golden sand than greenery. The beaches here are obviously the main attraction, but the Ervatão Beach on the southeast coast is extra special as it is the nesting site for the loggerhead turtles. If you are in the area between the months of July and September be sure to head to this beach to witness the turtles coming in from the sea to nest and lay their eggs. From the nesting place, you can also see the shipwreck of Cabo Santa Maria. Another highlight of a trip to Boa Vista is the sighting of humpback whales on the islet of Sal Rei, between the months of February to May.

Located on the island of Boa Vista, the pristine white sands of this beach which extend to more than 22 km are a great place to swim or for a leisurely stroll. There are quite a few spots for experienced surfers along this stretch as the waves are quite powerful here. As of now, the beautiful beach is quite exclusive but in a short while, the development projects that have been planned for the area will undoubtedly change its character.

Santo Antao, the second-largest island of Cape Verde is in sharp contrast to the islands of Sal or Boa Vista as the expanse of green which covers the land is far removed from the golden sands of the other islands. There are plenty of sightseeing and hiking options on this island. For the more energetic, the guided treks lasting a few hours will take you through the beautiful terrain of the region. From cliff-hanging towns to rugged mountains and rocky sculptures, there is a lot that you can experience one of the many hiking routes. If walking is not your idea of a perfect holiday then you can still get a taste of the spectacular beauty of your surroundings by going on a drive along the coastal roads.

Santiago is the largest island in the archipelago and is home to Praia, the capital of Cape Verde. It is the most African of all the islands in Cape Verde and is a melting pot of cultures. The island has a dark history as the old capital once served as the main trading point for slaves between America, Africa, and Europe. Much like the island of Santo Antao, Santiago also has some great hiking routes and places to explore. To experience the local culture start your walk for either of the volcanic mountain ranges from Assomada as it will give you a chance to mingle with the locals and get a feel of life on the island. You could also spend the day relaxing or snorkeling at the sandy cove at Tarrafal in the north of the island.

Cidade Velha, the first European colonial settlement in the tropics and the former capital of Santiago, is now a UNESCO World Heritage Site. To gain an insight into where the history of Cape Verde began, the old town located in the southern part of the island is worth exploring. Some of the original parts of the town are still intact like the two churches, the 16th-century town square, and Fort Real de Sao Filipe. Pelourinho a marble pillar which stands in the main square of the city is a poignant reminder of the miserable lives of the slaves who were punished at this pillar.

To experience the best of Cape Verdean culture, Mindelo on the island of Sao Vicente is where you should head. This traditional town filled with colonial architecture, restaurants, and cafes is home to some of Cape Verde’s greatest musicians. Mindelo comes to life at night with live music being played at most bars and restaurants. During the day you can try out the beaches of Sao Vicente which are highly recommended for windsurfers. The natural lagoon in Baia das Gatas located on the north of the island is a great place for swimming. If you’ve had your fill of the beaches you could make your way to the top of Mont Verde for some breathtaking views.

Cha das Caldeiras is the highest village of Cape Verde located in the crater of the active volcano Pico do Fogo on the island of Fogo. 75% of the village was destroyed in 2014 when the volcano erupted, but although many of the inhabitants moved away after the eruption, the village is still populated. The area is famous for coffee and the local wine which is produced from the grapes which grow at the foot of the volcano. The Count of Montrod from France is said to have brought the first vines with him when he stopped on the island of Fogo on his way to Brazil.

This active volcano which makes up most of Fogo Island is a popular hiking destination. From the village of Chas de Caldeiras, it takes about 3 hours to reach the crater of the volcano which is the highest point in Cape Verde. However, it will take you about 30 minutes to come down the volcano as you can actually run down the mountain with no fear of hurting yourself on the lava ash. The panoramic views of the mixed colored landscape offered from the top are worth the climb.