Top 12 Things To Do In Detroit 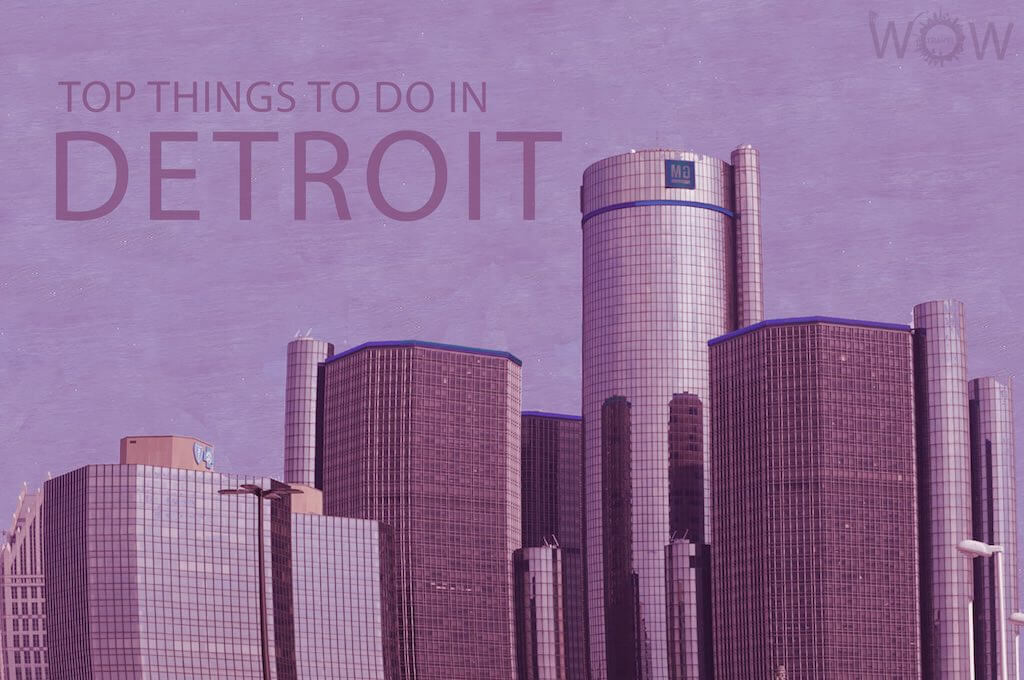 Located in the juncture of North American state of Michigan and the Canadian state of Windsor, Detroit is one of the most dynamic US cities. Culturally, technologically, and historically, this city is worth the visits from tourists from all around the world. Despite so many grieving and devastating situations, the town has retained its liveliness and ethnicity. Apart from providing an imperial view of the Great Lakes of the US, the city is famous for the cultural reserves it has housed for several years. Being a significant contribution to art and music, Detroit has made its presence known through several archaeological sites and the love of the people for music. As Detroit is one of the major industrial areas in the US, it attracts a lot of tourists every year. So, if you are planning to visit the city, make sure you are not missing these remarkable landmarks in Detroit.
[booking_product_helper shortname=”detroit”]

Situated on the Detroit River, this small island is a famous tourist attraction in the city. The size of this island will definitely amaze you, with just three miles of length and a few miles of width. However, despite being so small, the island has a lot to keep the tourists entertained and engaged throughout the day. You can visit the famous Belle Isle zoo which has nineteen Michigan species, the Whitcomb Conservatory, and the aquarium.

This Masonic temple is the world’s largest one, housing some of the leading organizations of the masons. The architecture of the temple dates back to the neo-gothic period, as limestone was mainly used to build the entire structure. The tallest part of the whole temple is the ritual building, standing to a height of sixty-four meter tall. The Cass Corridor is at level with the skyline, making the Detroit Masonic temple look extravagant because of it.

Fort Wayne is the third fortification in the Detroit city, standing proudly on the Detroit River. Since the time of its construction, for a decade the fort remained unused as the US and the British government of the then time had already reconciled. However, the fort did play a significant role during the American civil war, traces of which you can still see inside the fort. The entire structure was originally made of limestone. However, in the later years, bricks were added to strengthen the walls.

Built by Henry Ford, the famous automobile company owner, this entire live museum village spans over an area of eighty acres. Three ages of history are preserved within the seven different districts of this village in the form of eighty-three different historic buildings. The zones are- working farm, Model T, work district, Menlo Park, Porches and Parlors, Liberty Crawford, and the Main Street district. The village has witnessed Edison’s work, poetic nature of Frost, and the law practicing life of Lincoln.

As Detroit is the hub of American history, Pewabic Pottery is one of the famous landmarks, dating back to the time of 1903. The ‘Revelation Kiln’ from Caulkins is one of the main reasons why this art center flourished dramatically in the past. Ceramic jewelry pieces were designed in this pottery when the country went into a sort of depression of not having enough funds to buy precious jewelry. Visiting this pottery center is a must if you want to have an in-hand experience of witnessing the various tools and materials used to create such masterpieces.

Western countries mean a lot of skyscrapers, but somehow, Michigan has changed the meaning of this reality. Designing a city within a city is one of the reasons why Detroit is so famous for its art and technology. Built in the late 20th century, it has seven skyscrapers in total, each of them being interconnected with one another. The best part of the whole structure is that all the seven buildings are of different heights, the middle one- Detroit Marriott- being the tallest one.

Visiting the city’s natural reserves is a never-to-miss thing, which you cannot compromise for anything else. And when it’s about the zoo, then everything flies out of the window and excitement fills the heart. Detroit Zoo covers areas of three different woodlands- Woodward Avenue, Royal Oak and the Huntington Woods. Around two hundred and thirty-five different species of animals are there, living freely in this 125-acre forestland. Some of the best species that you can find here, in the Detroit Zoo are the Bactrian camel, Fallow deer, Reticulated giraffe, and the Polar bear.

Located in the Greenfield Village, this estate was solely built for Henry Ford and Clara Ford, the former being the founder of the famous Ford automotive company. The entire estate spans an area of 1300 acre, along the banks of River Rouge. Most of the gardens and other structural landmarks, including the limestone villa and the stables are accessible by the tourists. One of the main reasons why you shouldn’t miss out this place is the associated history of the estate, which will tell you many stories about the old American community.

Though this place is perfect for the book geeks, Detroit Public Library holds a special place in the history of the city. Built in the period of Renaissance, this library has architecture resembling the Renaissance period of Italy. Here, you can view the Burton Historical Collection and collection of the automotive historical era of Detroit. Spending a few hours marveling at the interiors and its fineness is something you wouldn’t dare to miss at all.

Established in the year of 1965, Charles H.Wright made sure to highlight the impeccable account of the Afro-American community. With a height of 120,000 feet, Detroit museum for African-American history is said to be the world’s largest, filled with thousands of different historical artifacts and other documents from the time. Here, you will even find some critical archival materials like Sheffield Collection about the Detroit labor movement, the collection of Blanche Coggin Underground Railroad, and many others.

DIA or the Detroit Institute of Arts is one of the famous museums in entire Michigan, with having the most extensive historical collection in the whole US. This institute will give you a clear insight into the world’s history, including that of the early ages to the medieval period and American history. Around a hundred galleries are there in the entire museum building. You can witness the armor collection from William Randolph Hearst along with the works of many other artists like Tony Smith, Tom Phardel, Sharon Que, and many others.

As the name suggests, this architecture was constructed to gratify the persons who have uncanny contributions to the automotive industry, including the pride of Detroit- Henry Ford. Founded in the year 1939, this magnificent structure has honored over eight hundred people, associated with the automobile industry. If you are quite interested in knowing the history of the world’s automobile market, then visiting the Automotive Hall of Fame is a must thing to do. Not only there are visual shows, but also various artifacts related to the automotive industry are on display in this structure.