Top 12 Things To Do In Ghent 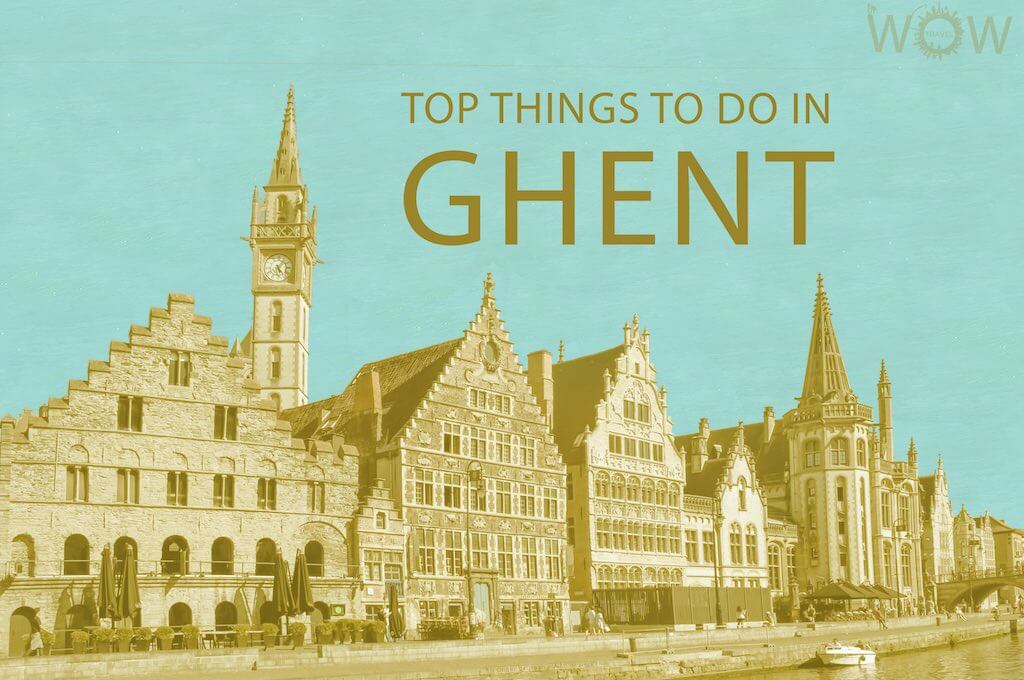 Ghent is the capital city of the East Flanders province of Belgium. The city which originally began as a settlement at the confluence of the Rivers Scheldt and Leie, became one of the largest and richest cities of Europe during the Late Middle Ages. The rich history of the city is reflected in the beautiful architecture that dominates the skyline of the old city. There is a lot to see and do in this beautiful city which is host to some major cultural events. Historical buildings, museums, and numerous parks are some of the things that make up this city. The best thing about Ghent is the lack of tourists. You can take in the culture and sites without elbowing your way through jostling crowds.
[booking_product_helper shortname=”ghent”]

The 91-meter-tall Belfry of Ghent is the tallest belfry in Belgium. This UNESCO World Heritage site is one of three medieval towers overlooking the old city center of Ghent. The construction of the tower began in 1313 and was completed in 1380. The belfry has not only served as a bell tower to remind the city of the time but was also a fortified watchtower. The charters of the privileges of Ghent were once stored here. The bells which were once used for religious purposes were transformed into a more secular role over time. They were used to sound the hour and also served as a warning of an approaching enemy. The hall adjoining the belfry was built as the headquarters for the cloth trade from 1426 to 1441. It now houses a cafe-restaurant which is popular with tourists.

The Citaldelpark boasts of being the largest green lung between the Scheldt and Lys. Created in 1875, it was once the site for eh Dutch citadel of Ghent. Built between 1819 and 1831, the citadel was used as an infantry and artillery barrack until 1870. The citadel was later demolished. The park underwent a transformation in 1930 for the centenary celebrations of Belgium’s independence. Parts of the casements of the former citadel are still visible in the park. Citadelpark is a great place to unwind with plenty of shady trees. Some rare specimens of trees can also be seen in the park. It is a popular destination for students and residents of Ghent.

This quay is located on the right bank of the Leie River. Opposite the Graslei is another historic quay called Korenlei. The quays which were part of the medieval port are now bustling with tourists. This site is considered to be one of the oldest in Ghent dating back to the fifth century. You will find some of the finest guild houses along the Graslei. It’s a great place to stroll down and take in the beautiful architecture of a bygone era. Some of the prominent buildings in the area are the 1531 Gildehuis der Vrije Schippers (House of the Free Sailors) and the 1698 Gildehuis de Graanmeters (House of the Grain Weighers). A whole row of unique guild houses built in Brabant Gothic style will definitely mesmerize you.

This Gothic-style Roman Catholic church was twice destroyed by fire. The current building commenced in the 15th century in two phases. The western part including the tower was built in the fifteenth and sixteenth centuries. Part of the church was destroyed in the late 16th century and the old choir was demolished. Reconstruction of the church began again in the mid-17th century. The western tower which was still under construction was never completed according to the original design which had a 134-meter-high spire. In 1828 a flat roof was built over the unfinished tower. The church has several silver and gold artifacts. One of the most famous relics is the sacred ‘Doorn’ which was brought to the church by Mary, Queen of Scots.

The Korenmarkt or Wheat Market is a city square situated in the historic center of Ghent. It was once the main site for cereal trade. Korenmarkt is now one of the most famous destinations for tourists. This is because of the historic buildings which surround the square. The buildings have since been converted into bars and cafes. One of the landmark buildings in the area is the old post office which is now a shopping center, 4-star hotel and cocktail bar. If you love old architecture, you should definitely visit Korenmarkt.

Gravensteen Castle or Castle of the Counts is a medieval fortress dating back to 1180. The castle is complete with a twisting staircase, a dungeon and a protective moat surrounding the high walls. It served as the residence of the Counts of Flanders until 1353 and was then transformed into a court. Later it became a prison, mint and a cotton factory. The castle was gradually bought by the city of Ghent and restored between 1893 and 1907. It now houses several museum collections and boasts of a unique collection of torture equipment.

Graffiti Street is a testimony to the vibrant city of Ghent. This public canvas for street artists is a burst of color. Every week the street changes as young artists spray paint some striking new scenes. Some of the works will make you look twice. There are several walking tours like the Concrete Canvas Tour that will give you a better understanding of this vibrant art scene.

The beautiful church of Saint Nicholas (Sint Niklaaskerk) is one of the most prominent landmarks in Ghent. It is one of the oldest churches in the area, having its origins in the 13th century. The blue-gray stone that is used for the construction of the church is typical of the Scheldt Gothic style. Over the years the building almost fell to ruin but due to a major restoration in the 20th century, it was restored to its original glory. One of the highlights of the visit to the church is the organ which was produced by Aristide Cavaille’-Coll, the famous French organ builder. The construction of the organ which began in 1853 was inaugurated in 1856. During the restoration of the church, the organ was packed in a wooden case and wasn’t visible for half a century. It was unpacked and visible to the public again in 2010.

Patershol is where you should head to if you want a taste of some of the gastronomic delights that Ghent has to offer. Eateries are plenty along the tiny cobbled streets of this part of the city. The medieval streets will make you feel like you’ve stepped back in time. Apart from the culinary delights, there is a lot to see and do in this part of the city. The House of Alijn, a recently renovated museum is also popular for the traditional pub in its inner courtyard.

One of the oldest and largest public squares in Ghent, Vrijdagmarkt has played an important role in the city’s history. Vrijdagmarkt translates as Friday Market, and true to tradition a market is held here every Friday. The tradition of holding a Friday market in the square dates back to 1199. A statue of Jacob van Artevelde is the centerpiece of the plaza. The statue is a poignant reminder of Ghent’s wise man who was murdered on the site in 1345. The square is surrounded by old guildhalls which are now popular bars and restaurants. Two monumental art nouveau buildings built in the 20th century, are located at the northerly corner.

The Saint Bavo Cathedral is the seat of the diocese of Ghent. The 89-meter-tall Gothic Cathedral is another of Ghent’s prominent landmarks. The construction of the brick and granite church began about 1274. The late Gothic tower and the main nave were built during the 15th and 16th centuries but the cathedral choir dates from the 13th century. The high choir is the most impressive part of the cathedral. The paintings inside the cathedral are quite spectacular. Most famous among the paintings is the Ghent Altarpiece, formally known as The Adoration of the Mystic Lamb. This painting is one of the most important works of the early Northern Renaissance and considered the masterpiece of Huber and Jan van Eyck.

The magnificent town hall of Ghent is referred to as the schizophrenic building because of the combination of a variety of architectural styles. Late Gothic flamboyant style dating back to the early 16th century is seen on the façade of the Hoogport side of the building. This is in sharp contrast to the Renaissance style on the Botermarkt side. In the niches of the facade, you will find the statues of the Counts of Flanders which were added in the 20th century. A Wedding Chapel, a labyrinth and stained glass windows add to the charm of the building.