Top 12 Things To Do In Hanoi 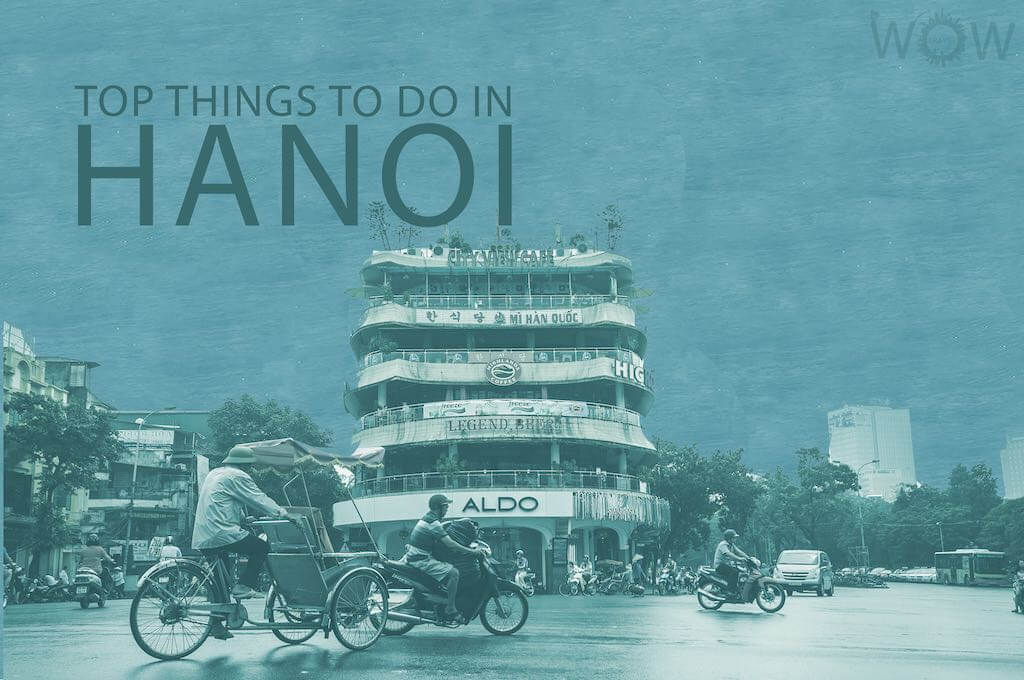 Introduction-a_few_phrases_about_the_article.- Hanoi is a beautiful and vibrant capital of Vietnam which also happens to be of the bright lights of the cities in Asia. Over the years, this capital city has transformed itself into a well-established city of the country which avails all kinds of facilities for all the locals. Apart from its cosmopolitan character, Hanoi is also considered to be one of the major tourist attractions of Vietnam and there are a number of places where the tourists can spend a gala time. Thus, if you are planning to make a visit to Hanoi, here are the top 12 things that you must never forget doing.

A visit to Hoa Lo Prison in Hanoi is surely going to give you a moving experience. This ancient internment facility was once used to be dubbed the Hanoi Hilton. The prison here was used to house all the prisoners of the United States during the Vietnam War. There are galleries where you could get acquainted with the history of this place.

Hoan Kiem Lake is considered to be the most famous spot in the city. At the same time, this lake is also believed to be a mystical body of water. The reason behind its mystic nature is that this lake used to have a mythical resident turtle who was claimed to be the hero of a Vietnamese legend. There are many stories about the turtle that you are going to hear from the locals. The entire sight of this lake is highly tempting.

The pretty Bach Ma Temple of Hanoi is considered to be the oldest temple of the city. Over the years, the temple has been rebuilt to retain its attraction among the tourists. Most of the renovation work of the temple was carried out in the 18th century. This temple is as old as 11th century where it was built during the time of Emperor Ly Thai To in the honor of a white horse.

The Lotte Center was completed in the year 2014 and the same happens to be the second tallest building in the city in the present time. You can take a bird’s eye perspective view of the capital city of Vietnam from the view deck of this place. Lotte Center provides a 360-degree viewpoint from the very top floor which is just magnificent. After enjoying the breath-taking view that the building provides, you can test your agoraphobia at the Photo at Skywalk. Here you can walk on to a glass floor that has a heart-stopping view of 65 stories resting in between you and the pavement. The entire sight of this building is simply beautiful and you can make the most of your time by catching some of the most breathtaking views of the capital city.

You must not miss the experience of visiting the Thang Long Water Puppet Theatre in Hanoi. This is a theatre that backs a waist-high pool of water where you would find the puppeteers standing. These puppeteers operate the puppets which are fixed to long bamboo canes. This entire arrangement appears as if the puppets are dancing on to the surface of the water. A number of shows are broadcasted in this theatre which depicts the stories of local legends, farming, and various Vietnamese myths.

The Imperial Citadel of Hanoi once served the seat of military power in the country and the same would have been a vital spot during the Vietnam War. Today, this Citadel has been given a title of UNESCO World Heritage Site. You can make the most of the 1,000 years of history at this Citadel. There are beautiful archaeological treasures including the foundations of ancient palaces. You can even browse the collection of military maps and weaponry.

The Long Bien Bridge of Hanoi was built from 1899 to 1902 by the architects who came over from Paris. This bridge became the very first steel bridge that spanned the icon Red Bridge. It is considered to be one of the focal points of Hanoi. It is highly recommended to take a tour of this bridge during the evening when the entire piece gets illuminated, thereby giving you a spectacular view for sure.

The West Lake is considered to be the largest freshwater lake in Hanoi and embraces a shoreline of 17 kilometers respectively. This lake is considered to be one of the most famous tourist spots of Hanoi which is not only famous among the tourists but locals as well. There are various beautiful spots around the lake that date back to as old as the 11th century.

The Tran Quoc Temple happens to be the oldest Buddhist temple Hanoi the construction of which dates back to the 6th century. The temple has a historic stele which tells how the pagoda came to exist and the same dates back from 1639. This was the same time when the building was erected during the reign of Emperor Ly Nam De. This pagoda rests on an island in the middle of the West Lake and you can have access to the temple through a small causeway. One of the most beautiful spots of the temple is the stupa that is believed to be having 11 floors and the same is filled with the statues which are covered in beautiful and sparkling gemstones.

Looking for a simplistic yet extravagant cafe? Come to Hanoi social club where you will get both the sweetness of the juices and the sourness of the alcoholic drinks. Divided in three floors, the interiors of the club will take you to the world of hip artwork. The menu here is quite classic, having both the local and international cuisine.

The Red River is considered to be at the heart of trade as well as warfare for the long millennium history of the city. Today, this place has become one of the most leading tourist attractions of Hanoi. The tourists can embark on a trip down to the length of this river in order to explore the city from a different viewpoint. There is a gorgeous view that will tempt you to the core. The cruise is beautiful and worth all the hype. Along the way, you can also enjoy the liberty of stopping at the historic temples and exploring the same. There are traditional manufacturing villages located along the way of the cruise which carries out different businesses. You can approach both the budget tour as well as a luxury tour of the Red River Cruise.

If you are a connoisseur of literature, this is surely the place for you to visit. The Temple of Literature is considered to be one of the most popular places in the capital city. This temple dates back from 1070 and today it happens to be a part of a wider complex including the charmingly named Lake of Literature. The major highlight of this temple is the Stele of Doctors where you will find 83 carved bluestone turtles which are considered to be the holy creatures of the country. If you are a budding publisher or writer, it is customary for you to pray at this temple in the very hope that you will publish a masterpiece at some point of your life.