Top 12 Things To Do In New Orleans 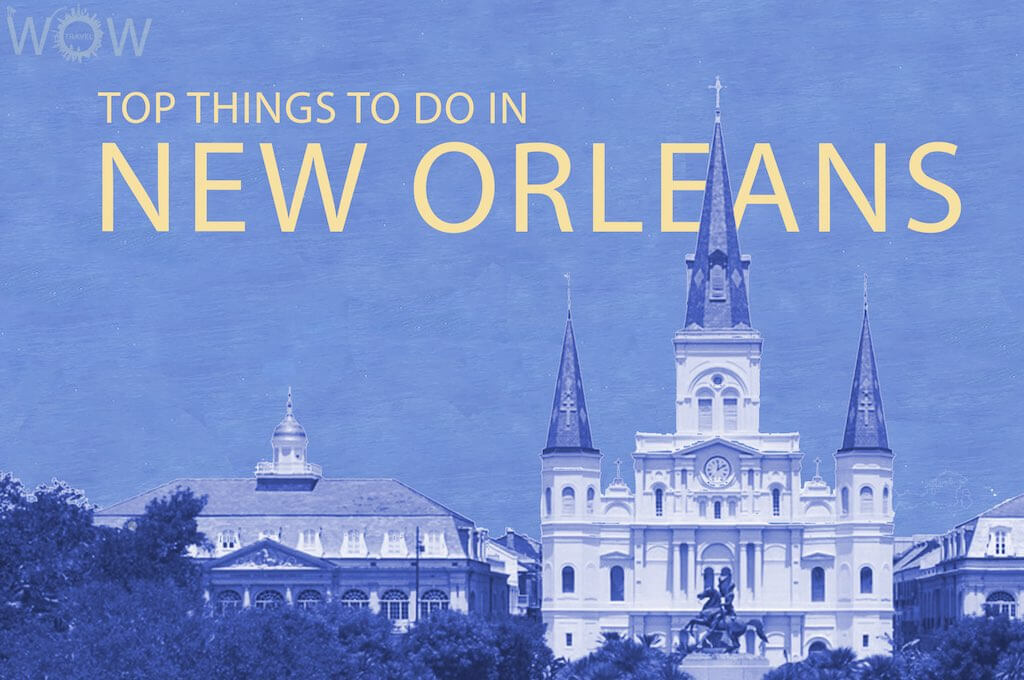 When it comes to the United States of America, there a lot of places which ignite a strange fire within the heart- the fire which compels your mind to explore new things and delve deep into the history of the site. One such place is New Orleans! Located to the south of the Mississippi River, New Orleans makes the ‘unique city’ of the USA. With a varied and mixed lingual culture and cuisine, the city is said to be a distinct face on the American culture. The liveliness of the city and it’s city life will shake you from the core in pure delight and ecstasy. The abundant flow of energy that flows in the air is enough to heighten your spirits and push yourself on the roads to discover more about this city. New Orleans has always taken pride in its a mixed community, cherishing the Native American culture and the French or Spanish culture in the same way. Before the Civil War, New Orleans wasn’t just the home to the native red Indians but also the Africans and even the European people. Such a historic treasure can’t be taken lightly, now can it be? So, let’s have a look at the attractions in New Orleans which will make your stay in the city unforgettable.
[booking_product_helper shortname=”new orleans”]

As the French founded New Orleans in 1718, the French Square is the central historic landmark, with a deep and soul-to-soul connection with the French history and their cultures. The street names in this area are still named after the French culture, indicating that no matter what, in the future also the French Quarter won’t let go of its roots. The architecture of the surrounding buildings is a sight to revel in, especially with indoor fountain and balconies graced with hanging plants.

Located in the French Quarter, this is a historical park, as the site has witnessed the famous Louisiana Purchase of 1803. Louis H.Piele had designed the entire public space, with its architecture resembling the French architecture. The Pontalba Buildings will give you an insight into the red brick architecture of the 1840s. The Jax Brewery used to be the home of the local beers in the nineteenth century. Jackson Square is a lively place which you can never rule out of your list.

Standing in the heart of the French Quarter, the St Louis Cathedral is the oldest building in the town and perhaps one of the oldest in the entire country of the United States of America. The cathedral was built in the memory of St Louis IX- the king of France. The first two structures were destroyed. What you will see today is the third construction built in the nineteenth century. It is also known as the main seat of the Archdiocese in New Orleans, and that’s one of the reasons why this is a famous landmark.

The entire park spans through an area of twelve acres- an area worth to visit. Housing more than two thousand floral varieties, City Park offers a venture to both the locals and the tourists from the daily honking of the city life. There’s a storyland, specifically built to entertain the kids with the fantasy characters within the building. The City Park is said to be the house of the world’s largest Oak Grove, albeit the living and the mature ones like the McDonough Oak and the Anseman Oak.

Being in a close neighborhood of the French Square, this place will bring peace and tranquility in your lives, even if that’s for a few hours. As usual, it is a famous historic landmark, which ensures that you can dwell both in the cultural and artistic beauty of the place. Designed in the time between 1832 and 1900, the houses and the surrounding gardens are well preserved for the eyes to devour its beauty. Several houses are considered to be the famous landmarks within the district, especially if you want to have a taste of New Orleans’ history.

Audubon Aquarium of the Americas

Located by the edge of the Mississippi river, this aquarium is said to be the house of some of the unique marine species, native to America and other geographical areas. The entire space is flooded with five hundred and thirty aquatics species, with more than ten thousand animals in all. The four main exhibits make the tour exciting and adventurous. The Caribbean reef, the Amazon world, the gallery of Mississippi life and the Gulf of Mexico world are the four exhibits in this aquarium.

Audubon Zoo is an escapade from the buildings and roads, and hence, it is one of the best recreational landmarks in New Orleans. The entire forest or zoo covers an area of fifty-eight acres, which is enough for housing around two thousand animals in their natural dwelling place. There are separate colonies or territories for the animals like the Jaguar Jungle where the Jaguar lives in its habitat- an ensemble of the Mayan civilization. The zoo also has the unique white skinned species of alligators with blue eyes.

Jean Lafitte National Historic Park is where the great battle of New Orleans took place. The struggle has a significant role in the history of entire America, and that’s the reason why the park is considered to be the hub of rich history and culture of the Cajun area. The whole park is segregated into six different regions, with three symbolizing the Cajun culture of the Acadians. In the Barataria Preserve, you will see the historic trails which will show you everything, starting from the swampy regions to where the martyrs lay.

Cemeteries are always a place of ghostly beauty and entrancing eeriness which makes the heart race a hundred miles a second in excitement. The same is with the cemeteries located all around the city of New Orleans. Starting from the time of the French colonies, these old cemeteries will take you back to those ancient times where history has seen it’s a fair share of roughness. The tombs in all the graves are made above the ground and are covered with embellished covers with etchings of the French and Spanish culture.

Built in the Spanish era, this former Spanish government building now serves as an insight into the history of New Orleans, starting from the time of the Spanish colonial period to the new facts about the hurricane Katrina in 2005. The architecture of the place seems to be a heart-touching piece, especially as it will give you a glimpse of the old Spanish culture. It is this building where the Louisiana Purchase had taken place, and the remnants of the same are still there for the public eyes.

This place is said to be most elegant and gorgeous amongst all other landmarks located on the land of New Orleans. The modern style architecture will cause your mind to be stuck in mayhem knowing that the place is somewhat picturesque of southern history. The entire area is spread across an eight-acre land with a house in between and a public garden. The garden is drenched with the green beauty of the local plants native to New Orleans while the house seems to be the reflection of the much-awaited history.

There is no doubt that New Orleans played an essential role in the Second World War and the proof of the same is there in the National WWII Museum. The three sections of the building will give you separate insight into different zones of the world war, including the aircraft which were used during the war. The Pacific zone houses artifacts from the Pacific countries, including America itself. The European region, on the other hand, will give you a glimpse about the history of the continent during WWII.