Top 12 Things To Do In Pula 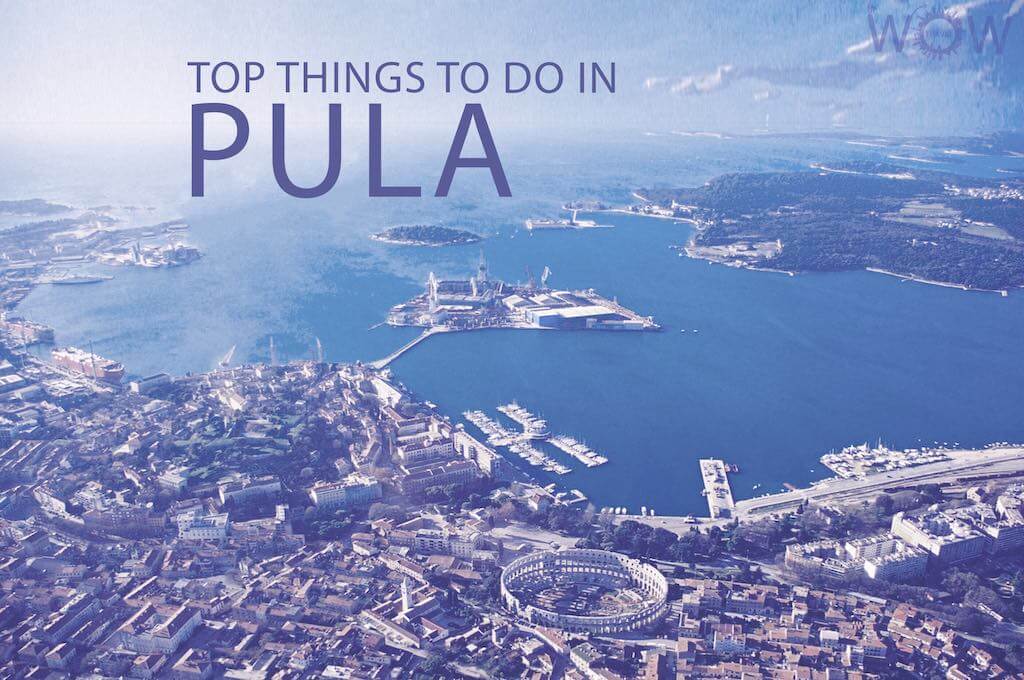 Pula, the largest city in Istria County, Croatia is renowned for the number of ancient Roman buildings and structures that it has. The city has been around since ancient times with plenty of historical evidence to prove it. Remnants of the Roman influence on the city are also found in many places. During the Roman era, the city was fortified with a wall and ten gates – a few of these gates are still standing. You will stumble upon the remains of many Roman structures as you explore Pula. You can also track the footprints of dinosaurs nearby. Pula’s unspoiled nature, calm sea and mild climate draw many tourists in the summer.
[booking_product_helper shortname=”pula”]

The Amphitheater or Arena as it is called by the locals is one of the most prominent landmarks of Pula. Construction on the Arena is presumed to have started in 27 BC – 14 BC for Emperor Augustus. The Arena was used for gladiatorial combats until it was banned in the 5th century. It gradually began to decline as locals began to plunder the stone from the amphitheater. A ban in the 13th century eventually stopped this plunder. What sets this amphitheater apart from the rest is that there are four rectangular towers in the outer wall cladding. It is also the only Roman amphitheater to have all three Roman architectural orders entirely preserved. The Arena at Pula is one of the best-preserved theaters from antiquity. It is still used for concerts and other events. One of the main events held here is the Pula film festival in the summer.

This old fortress referred to as Pula Castle was built by the Venetians on a hill in the center of Pula. It was designed by French architect Antoine de Ville in the 17th century. Stones from the Roman theater nearby and quarries around Pula were used for the construction of the fortress. The fortress became a great defense for the city because of its vantage point. Today the fortress serves as the Historical and Maritime Museum of Istria. The location offers you a beautiful view of the city of Pula and the nearby bay.

Pula was once surrounded by walls which were pulled down in the 19th century. The Twin Gates are part of the ten gates that served as entrances to the town. They date back to the mid-2nd century and were named after the two semi-circular openings that led into the town. The gates were buried long before the 13th century but were later unearthed in the 19th century. The present-day Archaeological Museum lies beyond the gates. The Gate of Hercules is an unassuming archway which dates back to the 1st century. A damaged inscription with the names of two senators entrusted to found a colony site of Pula provide evidence that Pula was founded between 47 and 44 BC.

The Church of Saint Anthony

This church dedicated to Saint Anthony of Padua is very close to the Arena. There is nothing spectacular about the interiors of the church which was built in a simple Romanesque style in 1931 except for the beautiful apse behind the High altar. The belfry of the church stands tall at 45 meters and can be seen from all parts of the city.

If you love the water and have time to spare, then a day trip to Cape Kamenjak should definitely be on your itinerary. It’s about a 30-minute drive south from Pula to the southernmost tip of the peninsula. There are beaches, hiking trails, and water sports in the area, but the highlight is probably the rugged rocky coastline of Cape Kamenjak. This is a popular spot for swimming. For the more adventurous, you can dive off the rugged cliffs into the crystal waters below. The Safari Bar which is located right next to the cliffs is extremely popular with visitors as its ideal for all age groups.

The Church of the Sacred Heart was originally built for the Jesuits in 1908 but was later used as a warehouse after World War II. The church is now owned by the Istrian Archaeology Museum. After its renovation in 2010-11, the place has been transformed into a prestigious exhibition center for high profile shows.

Arch of the Sergii

The triumphal arch also dates back to antiquity, to the Ancient Roman era. The estimated date of the arch is about 29-27 BC. The arch was erected as a symbol of victory in the Battle of Actium and commemorates three brothers of the Sergii family. Their names are inscribed on the columns. The arch is the main gateway into Pula’s historic center. It has stood the test of time and remains almost intact even after more than 2000 years.

If you’re expecting to see a grand cathedral, you may be a tad disappointed by the Pula Cathedral. This simplistic cathedral which was built on the site which had a temple dedicated to Jupiter was founded in the 4th century. It began as a single nave church and was later extended into a three-nave basilica over time. The original cathedral was at one time richly decorated with frescoes and floor mosaics but only a small section of it remains today. The free-standing baroque style bell tower was only added to the Cathedral in the 18th century. This was built with stones from the Pula Arena. An extensive renovation was carried out at the beginning of the 18th century and the present day facade was added.

The Temple of Augustus

The Temple of Augustus stands prominently in Pula’s Forum Square. The Augustan Forum which was constructed in the 1st century BC was once surrounded by temples of Jupiter, Minerva, and Juno. The well preserved Roman temple was dedicated to Augustus, the first Roman emperor. Not much historic detail remains inside the temple which was converted into a church under Byzantine rule and later used as a granary. During an Allied air raid in 1944, it was almost totally destroyed but was reconstructed in 1947. It is now used as a lapidarium for Roman sculpture.

Just beside the Temple of Augustus stands the Communal Palace which houses the local government of Pula. This spot has been used for public buildings since Ancient Roman times. The construction of the city hall was completed in 1296. The building originally had a Gothic style but underwent several reconstructions. In the 15th century, it was reconstructed in Renaissance style and then again reconstructed in Baroque style in the 17th century. The last renovation of the building took place in 1988.The Forum Square where these two iconic buildings stand is one of the popular hangouts for visitors.

The Byzantine chapel of Saint Mary Formosa which is in the form of a Greek cross was built in the 6th century. It bears a close resemblance to the churches at Ravenna and is one of the finest examples of Byzantine and Ravenna art. 6th-century mosaics adorn the floor and walls of the chapel. Only the south chapel stands today but a major part of the northern chapel is still visible in the neighboring residential buildings. The chapel was ruined in a fire in 1242 during the Venetian conquest of Pula. Most of its treasures including four columns of oriental alabaster were shipped to Venice. These columns now stand behind the high altar of St Mark’s Basilica.

If you’re not too worried about confined spaces then the Zerostrasse tunnels are worth exploring. Prior to the First World War and during the War, the Austro-Hungarian authorities began constructing an underground tunnel system. This was to shelter the city’s population and also served as ammunition stores. There are two shelter tunnels under the Kastel hill – one directly under the fort and the other at the foot of the hill. There are four entrances to the tunnel which all lead to the center. One of the entrances is from the Twin Gate. Various exhibitions and underground music events are held in the tunnels.