Top 12 Things To Do In Saint Paul De Vence 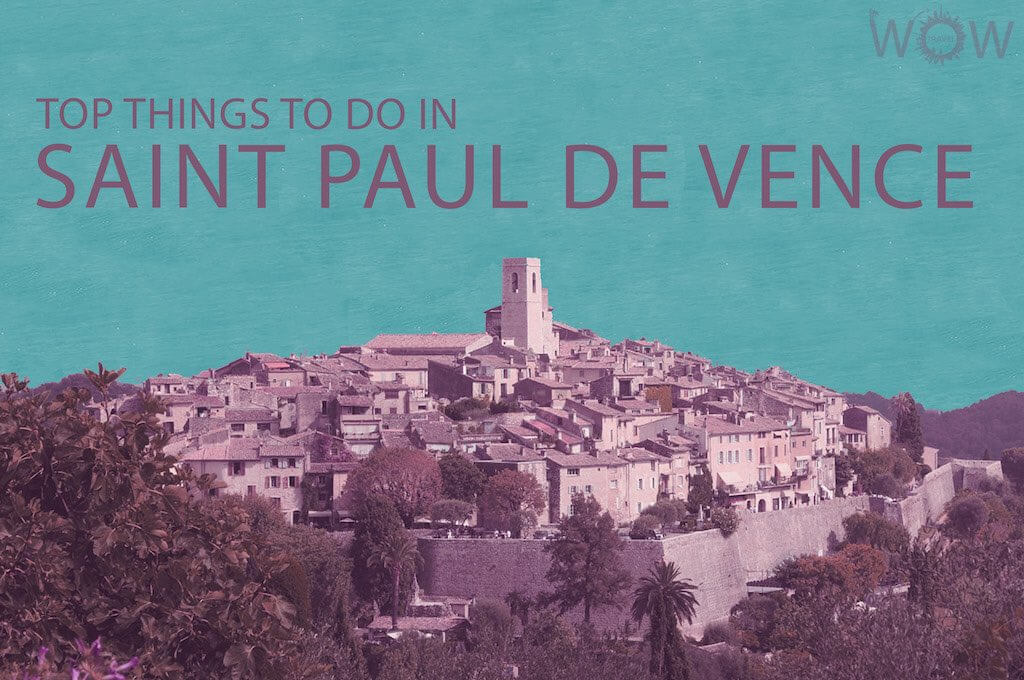 The commune of Saint Paul de Vence is one of the oldest medieval towns on the French Riviera. Perched high on a hill, the village has been drawing visitors to its environs through the ages. Saint Paul de Vence has been a big draw for artists and visitors from various parts of the world because of its close connection to art and culture. Prominent artists such as Marc Chagall, Henri Matisse, Pablo Picasso, and others made the village their temporary and permanent home. The artists’ imprint on the village seems to have been passed down as more and more artists have left behind beautiful masterpieces through the ages. There’s a lot that you can see and do here. From historical monuments to modern-day shops, restaurants and art galleries, Saint Paul de Vence has it all.

The ramparts of Saint Paul De Vence were built on the orders of Francois 1 in the 1540s. The bastion and walls that surround the town form a one-kilometer perimeter around it. The ramparts of the town were one of the first bastioned fortifications to be designed by a French architect in France. During the construction of the fortifications, many residents were forced to leave their homes which were later demolished. The walls have been a Listed Historical Monument since 1945. You can get some stunning views of the surroundings from the elevated walls which the village seems to rest on.

The Catholic Chapel of the Rosary is located on a hillside north of Vence. The chapel has gained worldwide recognition for the paintings created by none other than Henri Matisse between 1940 and 1951. The project was started at the request of a young nun who had taken care of him when he was ill with cancer. She requested Matisse to help with the design of a chapel that the Dominicans planned to build. Although this was something new to Matisse he readily agreed and began the project at the age of 77. He spent more than four years working on the chapel. Everything in the chapel from the stone altarpiece, the stained glass windows, candle holders and crucifixes were all created by Matisse. There are also three large murals by the artist inside the church. Matisse considered his work here to be a masterpiece.

The cemetery stands on the Plateau du Puy below the medieval fortifications, which was the core of Saint Paul de Vence between the 11th and 13th centuries. The chapel of Saint Michel of which the cemetery is a part dates back to about the 16th century. The original chapel was built in the 10th century. Marc Chagall the famous painter who made Saint Paul de Vence his home for over two decades is buried in this cemetery. Aime and Marguerite Maeght the pioneers behind the Fondation Museum are also buried here beside their son, Bernard who died at the age of 11.

The Fondation Maeght is a museum of modern art established in 1964 by Marguerite and Aime Maeght. Designed by Spanish architect Josep Lluis Sert, the iconic museum sits on a hill overlooking Saint-Paul de Vence. Fondation Maeght houses paintings, sculptures and all forms of modern art, which includes collections of many prominent 20th century artists. On the grounds, you will also find a chapel dedicated to Saint Bernard. The chapel was built in memory of the couple’s son Bernard, who died at the age of eleven from leukemia.

The iconic Colombe d’Or has seen some of the greatest artists walk through its doors. Started in 1920 as a café bar with an open terrace, the owner Paul Roux decided to extend the place to include 3 rooms for accommodation as an inn. During the Second World War, many artists moved to the area and the little inn was soon transformed into an artists’ meeting point. Some of the prominent personalities who ‘hung out’ here were Pablo Picasso, Matisse, Yves Montand, and James Baldwin. Many artists have left behind beautiful works of art that are prominently displayed in the restaurant. Artists would sometimes stay at the inn free of cost in exchange for a painting. La Colombe d’Or is now a hotel with 13 rooms and 12 apartments. It’s one of the 11 Best Hotels in Saint Paul De Vence.

The square in which the Provencal styled fountain is located used to be another iconic location for artists during the First World War. This area was once the market square where the weekly market used to be. In the area, you can also see the vaulted washhouse where the washerwomen would come to scrub and beat their dirty clothes. The fountain which was constructed in 1651 is decorated throughout the year according to the festivals. The restaurant behind the fountain is a great place to observe the popular square.

A 15-minute drive will take you the beautiful estate that was once owned by impressionist painter Auguste Renoir. The great painter moved to this beautiful location in Cagnes-Sur-Mer in 1903 where he spent the last 12 years of his life. The magnificent estate with its centuries-old olive trees is home to the Renoir Museum. There are 14 original paintings on display along with sculptures. A trip to this former residence offers you a glimpse into the life of the great painter.

The 17th-century chapel was the headquarters of the brotherhood of White Penitents for almost three hundred years. The brotherhood carried out lots of charity work in the area, offering food and shelter to travelers who were lost as well as helping the underprivileged. They existed in the town of Saint-Paul de Vence until the first quarter of the 20th century. The chapel was restored at the beginning of this century and redecorated by Belgian artist Jean-Michael Folon, hence it’s also known as Folon Chapel. The selfless work of the Penitents was the inspiration for most of the beautiful paintings inside.

The River Loup which flows through the Alpes-Maritimes enters the Mediterranean not too far away from Saint-Paul de Vence. The part of the river that flows through Gourdon just 20 km away, has some breathtaking scenes from the dramatic limestone gorges. The area has some beautiful, ravines and waterfalls with plenty of nature trails. If you’re an adrenaline junkie then you’ll definitely get your rush here from canyoning, abseiling or jumping into the water from platforms as high as nine meters.

The square bell tower of the Eglise Collegiale Saint Paul rises prominently as it is located at the highest point of the village. The tower once served as the chateau’s belfry dungeon. The bell tower collapsed in 1739 but was rebuilt the next year. This fact is displayed on an inscription at its base. The bell which rang out from the tower was melted in 1672.

About a 10-minute drive away is the Chateau Grimaldi at Cagnes-sur-Mer. The Chateau is built on the site where a fortress that was occupied by the Romans and Greeks once stood. The present castle was built by the Lord of Cagnes – Rainier Grimaldi in 1309. After the French Revolution, the castle was used as barracks and then as a hospital. Today the castle which looks down on the town is a museum of modern art known as the Chateau Musee Grimaldi. The castle was altered during the reign of Louis XIII in the 17th century. The painted ceiling in the great hall attracts many visitors.

It took almost four centuries to complete the construction of the village church from the 14th to the 18th century. As such, the various styles relating to different periods is quite evident at the Eglise Collegiale Saint Paul. The choir, the arch bands in the nave, and four pillars are from the primitive Romanesque church. By the beginning of the 16th century, the aisles were added to accommodate more people. The church was raised to the rank of a collegiate church in the 17th century. The chapel dedicated to Saint Clement which contains relics from the catacombs of Rome is the main attraction.