Top 12 Things To Do In Savannah 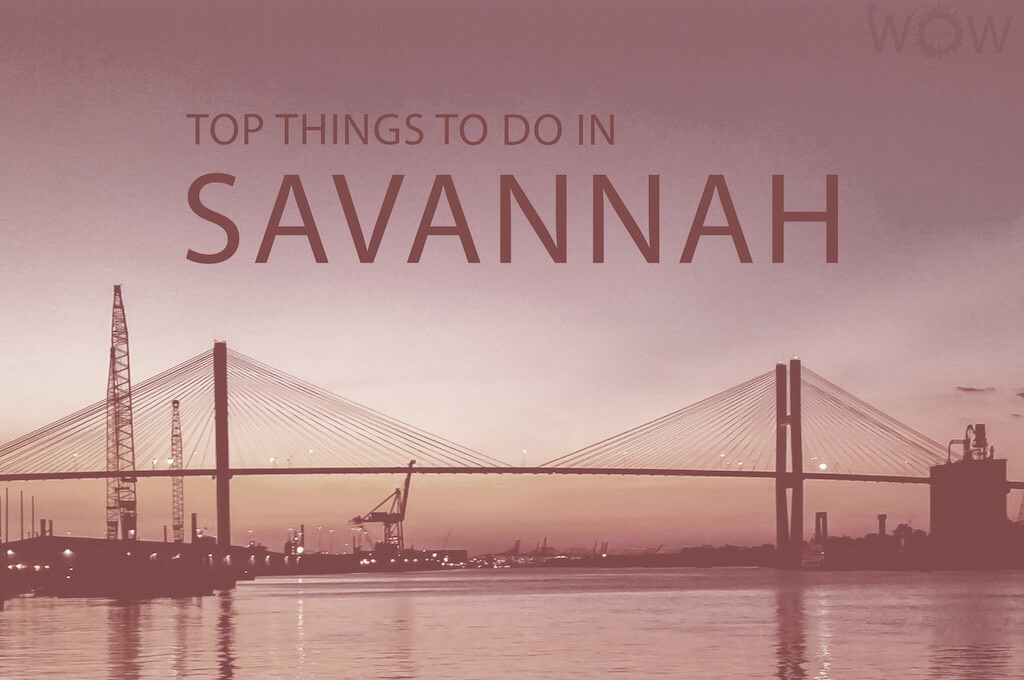 As the oldest city in the U.S. state of Georgia, the cobblestone streets, notable historic buildings and beautiful mossy parks, attract millions of visitors to Savannah each year. The city is also so steeped in history that much of the charm of visiting this southern state is to soak in the history of the area as you take a leisurely stroll through the Historic District’s 22 verdant squares or visit one of the haunted breweries. If you are visiting Savannah, here is a list of 12 interesting things that you can do.

Savannah has a rich history, stretching back to 1733 so a visit to the city would be incomplete without traveling back in time as part of a tour to understand what makes the city what it is. The most popular tours are the walking tours through the squares of the Historic District. There are 22 squares in all, varying in size and character with its own piece of history. Ellis square which was demolished to build the City Market parking garage has since been restored. Efforts are underway to revive the ‘lost squares’ of Elbert and Liberty which were destroyed in the course of urban development.

Hop on a Trolley Tour

If you’re tired of walking through all the squares in the Historic District but haven’t had your fill of the region’s history, then just hop on board a trolley Tour. These hop-on, hop-off trolleys not only cover the 22 squares but also show you the other prime landmarks of Savannah. There are 15 different stops and you can get off whenever you want to explore. Don’t worry about being stranded in one place for too long, the trolleys come around every 15 to 20 minutes so you’ll definitely be able to get back on another one.

This historic market has been around since the 1700s when it was Savannah’s central market place. Having withstood several tragedies, including two fires and the great hurricane of 1860, the market sadly lost its charm towards the beginning of the 20th century and was eventually demolished in 1954. Local residents, however, were quite disappointed with this turn of events and decided to step in. In 2006 the market was restored and transformed into the social hub that it now is. The City Market with its restored warehouses and open-air concerts is a popular destination for visitors.

The house which belonged to George Welshman Owens, a wealthy planter, lawyer and politician is renowned in the area for its architecture. Built in 1819, the house is so big it can fill an entire block. Greek-inspired craftsmanship, the old carriage house, intact slave quarters and the beautiful stained glass are just some of the facets of the house that lure visitors.

The Cathedral of St. John The Baptist

Called the ‘Sistine of the South,’ the Cathedral of St. John the Baptist is one of the most impressive buildings in the whole of Savannah. The stunning stained-glass, towering spires and intricate gold leaf designs are sure to make your jaw drop. If you’re an architecture buff you’ll definitely want to spend more time exploring its details. The cathedral is still an active house of worship so be sure to be respectful.

River Street which runs alongside the Savannah River is a perfect place for an afternoon stroll. You can take a leisurely stroll down the cobblestone street or stop to watch the ships. River street is also a great place for souvenirs, found in any one of the numerous shops that line the street.  The nine blocks which make up the street are full of historic architecture, art galleries, restaurants and pubs.

Savannah has earned the sobriquet of being ‘the most haunted city in America.’ There is no dearth of spooky places to visit so if you want a vacation mixed with some paranormal activity, you can join one of the many guided ghost tours through the city. One of the more popular tours is the Hearse Ghost Tours which as the name suggests, allows you to experience Savannah’s morbid past in the back of a funeral hearse.

If you still have a fascination for the morbid, but the paranormal activity is not your cup of tea, a visit to the Bonaventure Cemetery will surely satisfy that morbid curiosity. This 100-acre cemetery is extremely popular with visitors who stop to marvel at the historical architecture while attempting to seek out the tombstones of the famous people buried there. The cemetery is ornamented with sculptures and carvings and does feature on many people’s bucket lists.

This site is a photographer’s delight. The quintessential Southern setting with its mile-long avenue of big mossy oak trees forming a canopy of sorts has been immortalized in numerous photographs. The ruins of Wormsloe, the oldest standing structure in Savannah lie beyond the entryway. Apart from the ruins, there is also a small museum which features colonial artifacts and a nature trail running along the marsh on the Skidway River.

Kayak Through The Marshlands

One of the best ways of experiencing the stunning rivers and marshes of Savannah’s Lowcountry is by kayaking on them. Enjoy the thrill of exploring the protected waters of the Skidway Narrows or soak in the beauty of the Wormsloe Historic site as you paddle down the waters. On the guided kayak tours you can learn about the local flora and fauna and if you’re lucky enough you may catch a glimpse of an otter or dolphin, while eagles and osprey soar high above.

When you’re done with all the touring and sightseeing you may just want to spend the day relaxing under the beautiful trees of the 30-acre park in the heart of Savannah’s Historic District. Filled with flowers, foliage, trees, and a bit of history, the park draws locals and tourists alike, to relax in its beautiful environs. The stunning white-stone Forsyth fountain is probably one of the most photographed areas of the park, as is the 300-year-old Candler Oak tree. A playground and spray pool for children, the Fragrant Garden for the visually impaired, and the small cafes which encircle the park add to its charm.

Savannah is home to four breweries and one can visit any of them to enjoy the real taste of the city by sampling a chilled locally made beer. Visitors can go on a tour of the facility to understand how the beer is made and wind up the visit with a taste of the finished product. The breweries have scheduled events and restaurants which serve up some great food.