Top 12 Things To Do In Stavanger 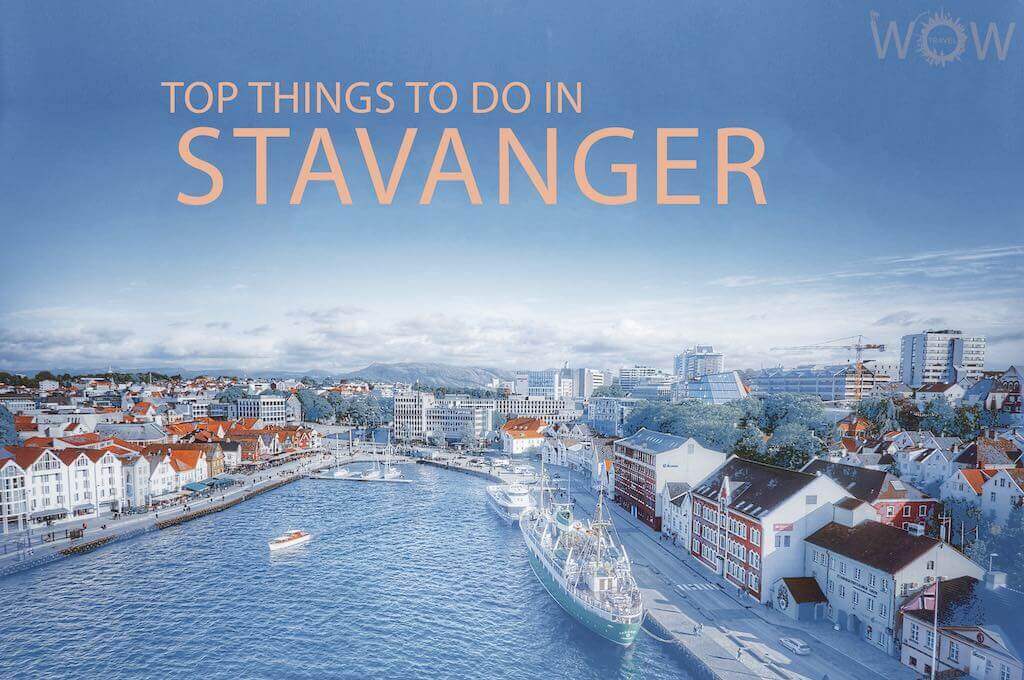 A small, old-fashioned, charismatic and gorgeous city located in the western coastal area of Norway, Stavanger has a lot to offer to its visitors. As one of the priciest locations in Norway, Stavanger exudes wealth and charm. Although the outskirts of the city are quite modern, the old center has retained its old-world charm with beautifully preserved wooden buildings that date back to the 18th century. There is quite a lot that will keep visitors busy with museums, shopping malls and plenty of fantastic outdoor areas to explore.
[booking_product_helper shortname=”stavanger”]

This iconic location also known as Preacher’s Pulpit is one of the most photographed locations in the area. This 610-meter cliff rising above the Lysefjord River is famous for its exceptionally flat top. Getting to Preikestolen involves a bit of traveling by ferry, bus, and a two-hour hike but when you the spectacular views from the peak are definitely worth the effort.

One of the oldest cathedrals of Stavanger located in the center of the city is Stavanger Cathedral that was erected in the 12th century. Built by Bishop Reinald, its notable features include a beautiful stained glass window, a Gothic period stone font and an elaborately carved Baroque pulpit. An extensive renovation was carried out in the 19th century to preserve its Gothic essence.

This edifice is a prime example of how the elite Norwegians spent their summer. The beautiful Ledaal House served as the summer home of the Kielland family during the 17th century. Currently, the house belongs to the state and still serves as a royal residence. Its rich interiors, historic gardens, and a museum are worth exploring.

The same river from which the Preacher’s Pulpit rises,  is the beautiful Lysefjord, a popular destination for its gorgeous scenery. After a mesmerizing boat trip along the spectacular green waters of the river, visitors disembark at the cleft to avail of the breathtaking scenery. The impressive cleft is nearly 37 km long and 2 km wide.

Gamle Stavanger is known to be the largest and oldest surviving settlement of wooden houses in northern Europe. The historic town is characterized by old-fashioned homes and cobblestone streets. It’s a great place to step back in time whilst exploring the old streets, admiring the natural beauty of the surroundings and visiting museums.

A well preserved ancient relic, Valbergtarnet, is located on the Holmen peninsula. The imposing watchtower, was built in the 18th century on the highest spot of the city to detect and warn people of any imminent danger. From the top of this tower, you can enjoy some really good views of the old town area.

One of the best places to soak in the vibe of the city is at the bustling Stavanger Harbor, a place that is almost always throbbing with life. A special event called the ‘Tall Ships Race’ takes place around this harbor in July. If you are lucky enough to be visiting Stavanger at this time, don’t miss out on making a trip to the harbor to marvel at these magnificent tall ships. Visitors can even go on board and have a look around these ships.

Deep in the Lysefjord lies the quaint town of Flørli, a place that can only be reached by ferry. Flørli is renowned for the longest flight of wooden stairs in the world, leading all the way up the mountain.  There are a total of 4444 steps that run alongside the pipeline to the power station that can be covered in a few hours. The power station is no longer functional so the stairs are also no longer of any practical use but attract visitors from all over who are keen to avail of some spectacular views from the top.

Another great spot for some incredible scenery is this picturesque landmark of Stavanger. A popular place for climbers and base jumpers, the mountain is a great hiking destination. The hike, however, is not for the faint-hearted as it takes six hours to cover the 10 km ascent. The key attraction here is Kjeragbolten, the glacial rock that is wedged between two mountains. The rock which is suspended 984 meters above a deep abyss is an amazing sight.

There are several sandy beaches, not very far from Stavanger along the 70km long coastline of Jaren.  The Borestranden and Solastranden beaches attract many visitors during the summer even though the waters are still quite chilly.

The name of this monument literally translates as ‘swords in rock’, which is what it is; a 10-meter high monument with three solid bronze swords driven into a rock. Sverd I Fjell was created to mark the end of a sheer naval battle, fought a few centuries ago. The large sword signifies Harald Faihair, the first Viking king of Norway. The other two swords depict the defeated opponents of the battle of Hafrsfjord.

Located right in the center of Stavanger, the Breiavatnet is an ideal location for sightseeing or enjoying a leisurely stroll. There is a nice little lake in this area usually inhabited by ducks that visitors can also feed. The lake is a popular spot for ice skating during the winter.