Top 7 Things To Do In Luxembourg City 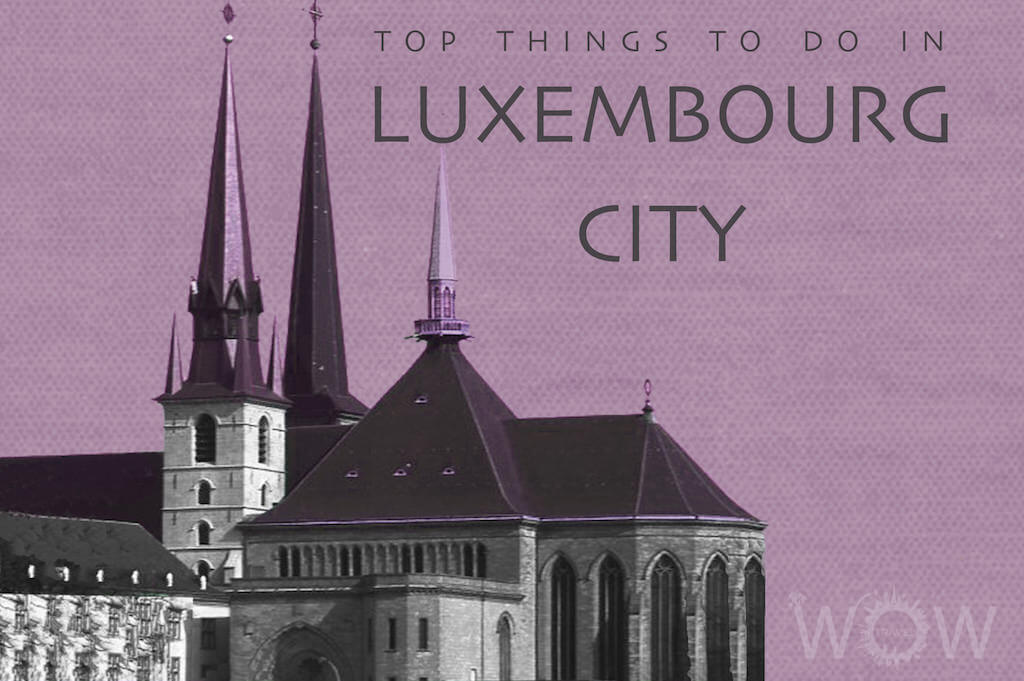 Luxembourg is the only enduring sovereign Grand Duchy in the world and its capital, Luxembourg City, may well be among the small capitals in Europe, but it feels like a much bigger city and has a lot to offer in terms of diversity, cultural history and quality of life. The valleys with the rivers have charming little houses built along the banks, castles and churches line the clifftops; palaces and grand government buildings dominate the structure of the historic part of town. Its streets are spotless, its flower beds perfectly groomed and its buildings look like they must receive a fresh coat of paint each month. Enjoy our list of the Top 7 Things To Do In Luxembourg City.

Place Guillaume is one of the busiest little squares in the city, dedicated to William II of the Netherlands (1792-1849), Grand Duke of Luxembourg. The equestrian statue of the great man stands in this square. moreover, the square hosts colorful open-air markets each Wednesday and Saturday morning.

Vianden is a delightful historic town (50 minutes drive from Luxembourg City)) with a stunningly restored medieval castle, spectacularly situated on a rock high above the town. Think charming cobblestoned streets with typically pastel-colored Luxembourg mansions and a gorgeous Our valley backdrop. Vianden is a traveler’s favorite and although high season will bring in some crowds, it’s a most pleasant little town with a restaurant at every corner and all the fairytale atmosphere you could ask for. Source: wikivoyage

Once described as the “most beautiful balcony in all of Europe”, the Chemin de la Corniche is a fantastically scenic promenade and a delight to stroll down during the day or night. At the southern base of the picturesque, cobble-stoned quarter is the stunning Citadelle du St Esprit which provides superb views of the lower town (Grund) as well as the valleys along the side of a huge cliff.

It is a remarkable instance of a late Gothic style, revealing various components and ornaments inspired by Renaissance style. It contains the tomb of John the Blind, king of Bohemia and Count of Luxembourg from 1310 to 1346. Several members of the royal family and noted bishops are buried in the crypt.

The cemetery consists of 17 acres of manicured lawn surrounded by 33.5 acres of woods. Entering through the gates, the visitor will see the impressive memorial chapel encompassed by a stone terrace directly in front of them. The chapel includes massive bronze doors embellished with gold leaf cartouches depicting military “virtues”, a sparkling mosaic ceiling and a colorful stained glass window showcasing the Army insignias representing the 5076 men and woman that rest in the cemetery. Many of whom lost their lives in the Battle of the Bulge and in the advance to the Rhine River. Source: abmc.gov

Located in the heart of Luxembourg City, the Grand Ducal Palace is the official palace of the Grand Duke and is used for all official functions. Owned by the State, it is one of two palaces made available to the Grand Duke under the Constitution of Luxembourg. The building was first the City Hall of Luxembourg from 1572 to 1795, the seat of the prefecture of the Département des Forêts in 1795, and then the headquarters of the Luxembourg Government in 1817.

Part of a World Heritage Site, Casemates du Bock once played a key role in a network of defensive underground passages. Originally stretching for over 20 km (12.5 mi), the honeycombed passageways housed garrisons of soldiers defending the city, along with their horses, weapons, and other essential equipment. Constructed in the mid-18th century, the casemates provided a shelter for nearly 40,000 locals during World War II. After exploring the city’s underground history, enjoy sweeping views from the top of the casements. Expect lots of stairs and prepare for your walk by wearing a pair of comfortable shoes. Source: inspirock