Top 8 Things To Do In Vilnius 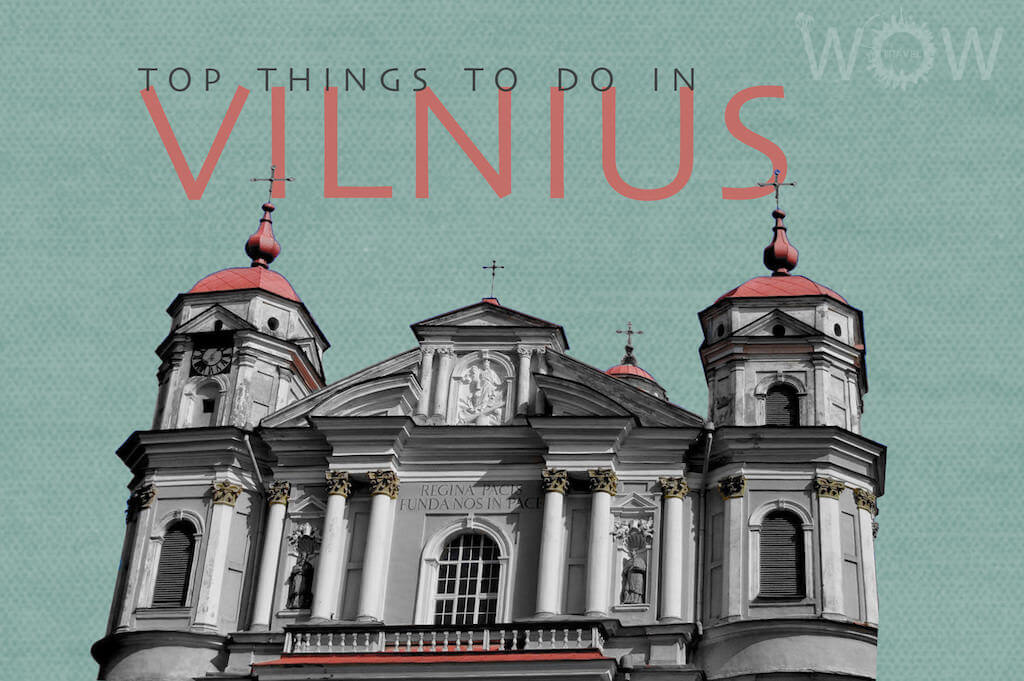 Central Europe is one of the most fascinating yet underrated regions, and Vilnius, Lithuania’s capital and largest city, is a good example. With its twisting alleys of Baroque and Gothic architecture, Renaissance-style castles, long history, rich culture, delicious food and friendly locals; Vilnius is a major stop along the Baltic route, and an adorable little city. We invite you to take a look at WOW Travel’s Top 8 Things To Do In Vilnius.

Church of St. Peter and St. Paul is a Roman Catholic church located in the Antakalnis neighborhood of the city. It is deservedly considered a pearl of Lithuanian Baroque architecture and design. Its interior has masterful compositions of stucco mouldings by Giovanni Pietro Perti and ornamentation by Giovanni Maria Galli of Milan.

With more than half a million people annually visitors, Gate of Dawn sanctuary, is one of Lithuania’s most celebrated pilgrimage sites. It is so popular thanks to the fabulous portrait of the Blessed Virgin Mary that lies within its walls. The painting, which is often also called the Vilnius Madonna, hangs in the chapel built into Gates of Dawn and has been copied by many other churches.

This tower is a symbol of Vilnius and one of the only remaining parts of the Upper Castle and displays its flag with the coat of arms of Lithuania which is a symbol of Vilnius. It was originally built of wood by Grand Duke Gediminas of the 14th century, then fortified with brick in the 15th century. The single red tower provides great skyline views of the city and also hosts a small museum.

Vilnius TV Tower is the highest building in Lithuania. Inside Vilnius TV Tower at the height of 165 meters (541 ft) there is a circular restaurant called “Paukščių takas” (“Milky Way”). On clear days, Vilnius and its suburbs are visible in the radius of 50 km (31 miles).

The Hill of Three Crosses is one of the most beautiful places in Vilnius. The wooden crosses were the build around the 17th century and soon became a symbol of the city of Vilnius. The Crosses were originally erected in the 17th century in memory of three monks who were killed on the spot, destroyed by the soviets and rebuilt later by the people of Lithuania. If you wish to see great views of the city, that’s the best spot.

One of the most picturesque parts of the Vilnius University is the St. John”s Church and its bell tower. The construction of the Gothic style church lasted for almost 40 years and was completed in 1426. In 1571 the church was transferred to the Order of Jesuits and became a part of the university complexes. In Soviet times, it was turned into a warehouse. Later, the University Museum was established there. Today St. John’s is again a Roman Catholic church. The bell tower of the church, which is 68 meters (223 ft) high, is among the highest buildings in the Old Town. Source: spottinghistory

In 1995, a group of Lithuanian artists and intellectuals erected a statue of Frank Zappa in the nation’s capital Vilnius. Two years later, on April Fool’s Day 1997, the city’s bohemian quarter declared itself an independent Republic, replete with approximately 12 man army, a president, cabinet, currency, a flag, and even a constitution. Nowadays, this micro-nation, known as the Republic of Užupis, is an artist’s quarter on one side of the Vilnelė River, where the speed limit is 20 and a smile is a requirement. Apparently, the town’s residents set up a formal border each year on Užupis’ national day, April 1st, when it’s possible to have your passport stamped.

Vilnius Cathedral is a Lithuanian Archdiocese and Deanery center. The Cathedral is located in the heart of Vilnius Old Town and enchants its inhabitants and guests by magnificence and classicist architectural style. The Cathedral was built in the middle of the 13th century by order of King Mindaugas when he accepted Christianity in 1251. Today in the Cathedral the services are held every day, and in its underground vaults, an exposition is displayed, reflecting its history from the 13th century until our days.