Top 9 Things To Do In Alaska 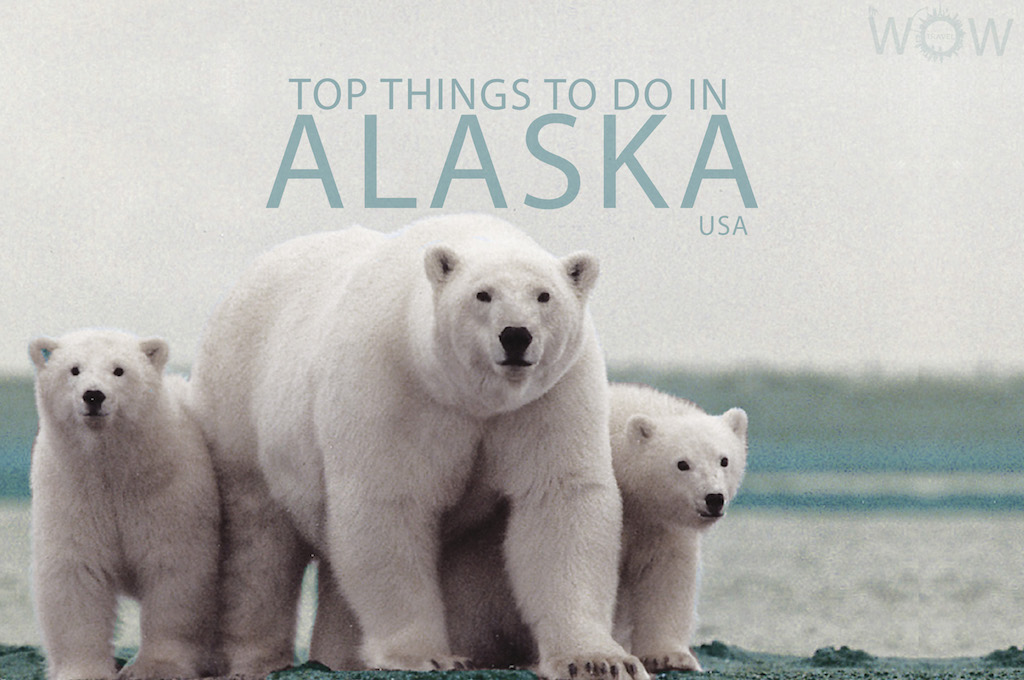 Surrounded by natural beauty such as mountains, glaciers, and vast wildlife, visitors to Alaska have the opportunity to relax and enjoy themselves as well as an adventure-filled trip. Alaska offers myriad settings for outdoor enthusiasts to explore. No other place promises such easy and overwhelming immersion in the wild world like this. Here is our list of the Top 9 Things To Do In Alaska.

Wrangell-St. Elias National Park is the largest National Park in America. At 13.2 million acres, is larger than the country of Switzerland. It is home to 9 of North America’s 16 tallest peaks, over 150 glaciers, 4 major mountain ranges, and the largest glaciers outside the polar ice caps. This natural jewel has been recognized by the United Nations for its “outstanding universal value to mankind… part of the heritage of all nations of the world.” Wrangell-St. Elias National Park together with neighboring Kluane National Park in Canada has also been designated as a UNESCO World Heritage Site for its unique beauty and natural splendor.

Denali is six million acres of wild land, bisected by one ribbon of road. Travelers along it see the relatively low-elevation taiga forest give way to high alpine tundra and snowy mountains, culminating in North America’s tallest peak, 20,310′ Denali. Wild animals large and small roam un-fenced lands, living as they have for ages. Solitude, tranquility and wilderness await. Source: nps.gov

The scenery along the Seward Highway, connecting Anchorage to Seward, will be something you won’t forget. The first 80 km (50 miles) skirts the base of the Chugach Mountains and the shores of Turnagain Arm, where it’s common to see beluga whales, Dall’s sheep, waterfalls, and eagles. The remainder of the drive winds through the mountains of the Chugach National Forest, offering dramatic views of Alaska’s wilderness. Source: theluxurytravelexpert

With 587,000 acres of Alaska’s deepest wilderness, the park was created in 1980 to protect some of the most incredible and impenetrable wilderness in Alaska. Kenai Fjords National Park is a 601,839-acre glaciated paradise lying at the foot of Seward. Snow and ice cover 60% of the park and crowning it is the 2,424 square-km (936 square-mile) Harding Ice field, one of only four remaining ice fields in the U.S. Swarming with a range of marine wildlife, Kenai Fjords National Park offers multiple opportunities to partake in hiking, paddling and kayaking. Source: your-hols

This narrow fjord is located approximately 80 km (50 miles) southeast of Juneau. It extends over 48 km (30 miles) long, with nearly a quarter of its area covered in ice. Tracy Arm Fjord has it all – tidewater and elevated glaciers, breathtaking mountains and sheer rock walls that reach up over a mile high with waterfalls that tumble down to the emerald green water, and Alaska’s largest icebergs. Watch for whales, bears, mountain goats, hundreds of harbor seals, and a variety of birds such as eagles, arctic terns, kittiwakes, and pigeon guillemots. Source: adventureboundalaska

Northern lights, or the Aurora Borealis, are one of the world’s most dazzling natural phenomenons. Because of their nature, it looks like the lights are moving around the sky, dancing if you will. The northern lights are produced by charged electrons and protons striking the earth’s upper atmosphere. One of the best locations in Alaska to experience it is in Fairbanks, where they can be seen an average of 243 days a year. Fairbanks is situated within a ring-shaped region around the North Pole called the auroral oval. This location provides a terrific balance of occurrence, frequency and activity. Plus, the continental climate offers many more clear nights than you would find in a coastal area. While intensity varies, the most common yellow-green glow occurs heavily between late August and April.

The Iditarod Trail Sled Dog Race is an annual long-distance sled dog race run in early March from Anchorage to Nome. It is sometimes called the “Last Great Race”. The race starts on the first Saturday in March and takes about 10 days to complete. Planning to visit for this event? Make sure to stay at one of the 11 Best Hotels in Anchorage, Alaska.

Every year, thousands of humpback whales migrate more than 3000 miles from Hawaii to Alaska. They spend winter in tropical waters for mating and calving, and then make the 4 – 8 week voyage to temperate and polar waters in Alaska during the summer to feed and rebuild their blubber supply. Point Adolphus in southeast Alaska near Gustavus is a popular feeding area for the Alaska humpback and a popular place for travelers to get a glimpse of these enormous mammals. The best time to view humpback whales at Point Adolphus is between May and August. Source: glacierbayalaska

Katmai National Monument was created in 1918 to preserve the famed Valley of Ten Thousand Smokes, a spectacular 103 square km (40 square miles), 30 to 210 meters (100 to 700 ft) deep ash flow deposited by Novarupta Volcano in 1912. A National Park & Preserve since 1980, today Katmai is still famous for volcanoes, but also for brown bears, pristine waterways with abundant fish, remote wilderness, and a rugged coastline.