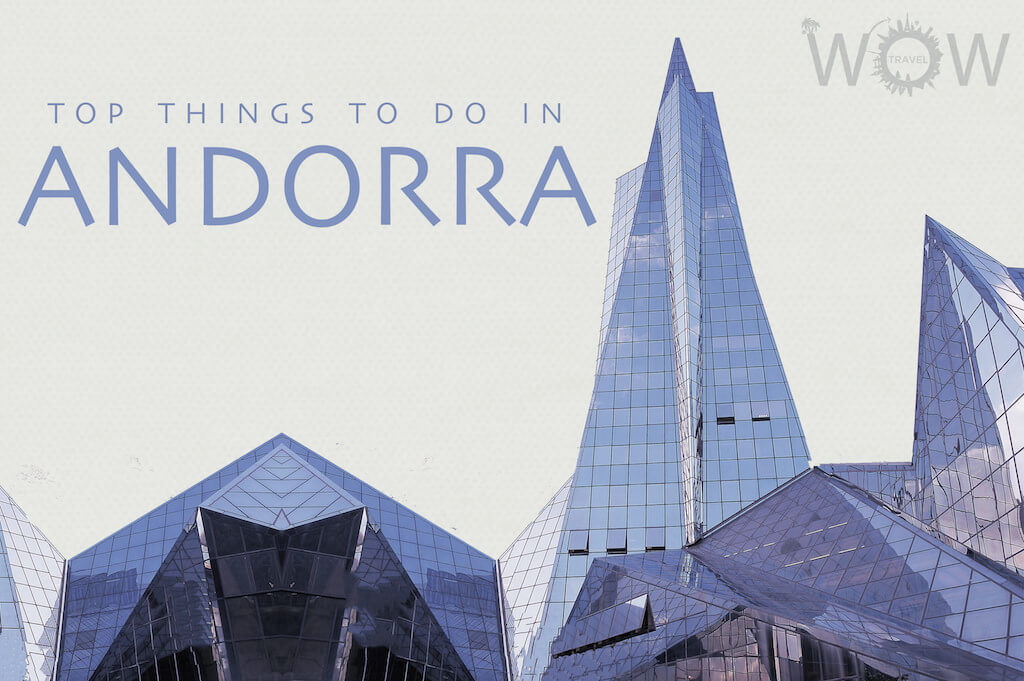 This small landlocked country borders Spain and France is nestled high in the eastern Pyrenees mountains. Andorra is a good destination for those interested in outdoor activities, offers jaw-dropping scenery, high-quality hiking in the summer and skiing in the winter. The nation’s warm hospitality coupled with Andorra’s low tax and duty-free prices makes it one of the favorite tourist hot spots in Europe. We’ve rounded up for you the Top 9 Things To Do In Andorra.

in the geographical center of Andorra, is the town of Encamp. Home to nearly 12,000 people, it makes for a good base no matter what time of year you choose to explore the country. Its downtown is also one of the prettiest, with the Valira d’Orient river running through it, and its fine old buildings now serving as shops, cafés, and restaurants. It also serves as a great place from which to hike thanks to the neighboring Pic dels Pessons mountain, at 2,865 meters (9,400 ft) the parish’s tallest peak. Come winter, the town is transformed into one of the country’s most important ski centers with a gondola linking it directly to the slopes of Grau Roig and Pas de la Casa. Source: planetware

Andorra not only boasts great skiing, it also has Europe’s largest spa. Set high in the Pyrennes in Escaldes-Engordany is the Caldea Thermal Spa, with 6’000 square meters of inside and outside lagoons, saunas, jacuzzis, a grapefruit pool, an Aztecian pool, Indo-Roman baths, cascades, bubble beds and warm marble slates.

El Serrat is a beautiful mountain village, sits in a magnificent location in the parish of Ordino at an elevation of 1,540 meters (5,100 ft). It is a great base from which to explore the surrounding countryside.

Vallnord is a ski & snowboard resort located in the Pyrenees mountains, close to the border with Spain at Tor, Pallars.. The Vallnord combines 3 different ski resorts: Arinsal, Pal, and Ordino-Arcalis, which together offer skiers an exceptional variety of quality skiing. Since 2004, the 3 resorts in Vallnord have been covered by the same ski pass, offering guests the opportunity for a great variety of skiing and snowboarding. Arinsal and Pal are linked by a 50 person cable car, with Ordino-Arcalis being a bus journey away, taking approximately 40 minutes.

Dating back to the 11th century, the Church of Sant Joan de Caselles is a fine example of the Andorra Romanesque architecture with its rectangular nave and wooden ceiling, semicircular apse and Lombars style bell tower. It is located on the way out of Canillo to France, alongside an ancient road.

Lying at the junction of two mountain streams, the capital of Andorra is the highest capital in Europe, having many popular ski resorts around. With its charmed cobblestone streets and small stone houses of ancient Roman styled architecture, it is like being transported back in time to the 13th century. Sights include a fine 12th-century church and the Casa de la Vall, the ancient seat of government. If you are here to shop wih no tax, you should head to Meritxell and Carlemany Streets.

Explore a 12th-century, four-floor bell tower–the main feature of Santa Coloma Church. A pre-Romanesque structure built in the early 10th century, the church is decorated with Romanesque mural paintings by the Master of Santa Coloma. It houses a bust of Our Lady of Remedies, as well as a Baroque altarpiece. You can take a guided tour of the church, but be sure to call ahead and check for opening hours. Source: inspirock

This sleepy town is just 20 minutes drive from the capital surrounded by meadows and rugged mountains. It is home to the lovely 12th-century Sant Martí de la Cortinada church, which is famed for the stunning frescoes.

With more than 210 km (124 miles) of runs, Grandvalira has the largest ski domain in the Pyrenees and is credited with covering the most extensive surface area in the South of Europe. Situated in the Eastern valley of Andorra, Grandvalira offers the choice between seven different sectors, so as to satisfy the most demanding customers. Artificial snow guarantees more than 60% of the ski domain, making winter sports available at any time. The resort is home to the only run in Andorra where international Alpine ski competitions can be held -one of the few in the Pyrenees. Source: skiandorra