13 Of The World’s Most Beautiful Cemeteries 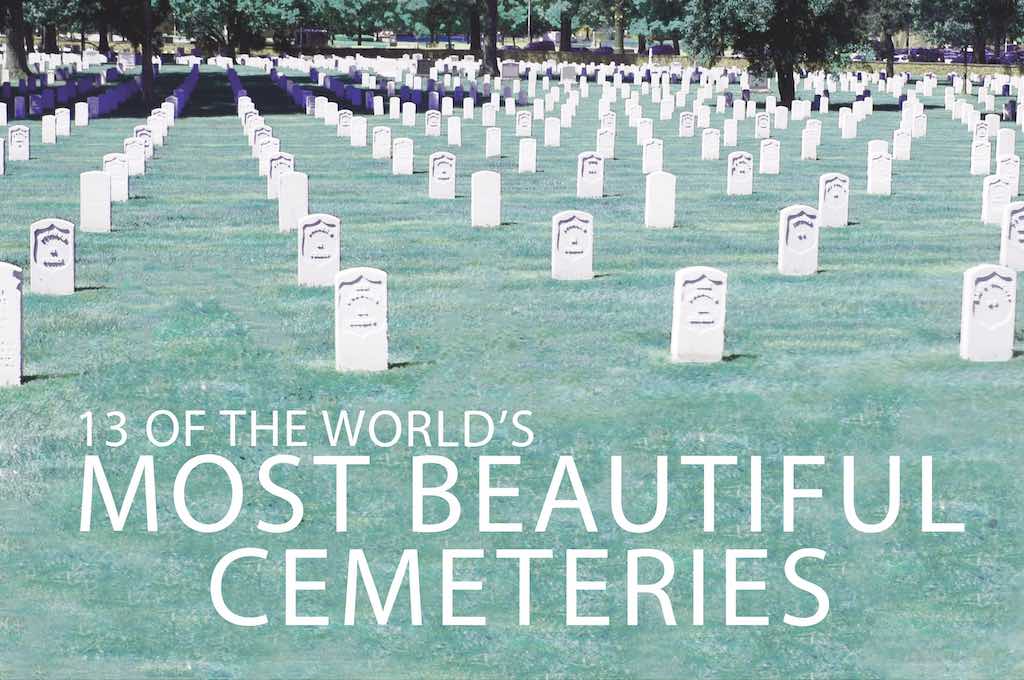 Nestled in St. Andrews, Scotland, this exceptional cemetery is the epitome of vintage architecture dating back to the 11th and 12th centuries. When visiting the St. Andrews Cathedral Graveyard, you are introduced to fragments of the once formidable cemetery that has withstood storms, fire, and war while overlooking the North Sea. As a visitor, you can admire the outdated sculptures and appreciate the resting grounds of the 19th-century golf maverick Young Tom Morris.

The Waverley Cemetery offers more than what meets the eye. Situated in Sydney, Australia, this cemetery is synonymous with pristine real estate value based on its unique location. As a tourist, the cemetery serves as a prime location to experience the breathtaking ocean breeze, watch surfers honing their skills and capturing epic photos from the sunrise.

When you are in the mood for some rich history while celebrating your Halloween or vacation, the Il Cimitero Acattolico di Roma is the right place to be. Situated in Rome, Italy, this cemetery depicts the noble deaths of Percy Shelley and John Keats, two distinguished poets, widely known for their missionary contributions. Back then, the Pope was credited for setting aside a substantial field adjacent to the Roman-era pyramid for the burial of the Catholic foreigners.

While most cemeteries depict a dreary and dull reputation, the Chichicastenango is a colorful spectacle to behold. Perched on a hillside away from the mundane hustle of tourists, this cemetery celebrates the Mayan tradition like no other graveyard. Each tomb is painted in a different shade to symbolize the role played by the deceased to the society. For instance, grandfathers are identified with a bright yellow color to symbolize their protective quality. On the other hand, mothers are identified with the white color to symbolize purity.

To understand the rich culture of the Puerto Ricans, don’t hesitate to visit the Santa Maria Cemetery. This spectacular graveyard offers panoramic views of the Atlantic Ocean to denote the spirit’s epic journey into the afterlife. The azure horizon of the water complements the white memorials reflected on the graveyard’s walls. Tourists have consistently visited the graveyard to pay homage to over 1,000 deceased residents including influential artists, actors and politicians.

The Highgate Cemetery has progressively developed a reputation as one of the most famous cemeteries in the U.K. Often compared to Victorian Funerary architecture; this remarkable London cemetery is the resting ground to renowned personalities such as pop star George Michael, famed writer Douglas Adams and philosopher Karl Marx.

Located in Paris, France, the Père Lachaise stands as the most visited cemetery attracting over 3.5 million visitors annually. Unlike other cemeteries, the Père Lachaise houses the remarkable Victorian monuments and mausoleums. Not only that, but the cemetery is home to the graves of influential personalities such as Jim Morrison, frontman of The Doors, and the Irish dramatist Oscar Wilde.

The Bonaventure Cemetery is an exceptional graveyard with a unique landscape designed to attract tourists worldwide. More recently, the Savannah-based graveyard grabbed the headlines by featuring in the novel Midnight in the Garden of Good and Evil. The cemetery exudes a Sothern Gothic atmosphere with an expansive Spanish moss covering the Victorian monuments. The Bonaventure Cemetery is widely known as the burial ground of notable personalities such as poet Conrad Aiken and Johnny Mercer.

Don’t hesitate to visit the cemetery at Katholische Pfarre when you are in Austria. This cemetery isn’t just a resting place but a picturesque setting adjacent to Hallstatt village. Since the cemetery holds premium real estate value, bodies had to be exhumed and buried to alternative cemeteries. When visiting the cemetery, you are welcomed by a fascinating 1,200 skulls on display. Interestingly, the ancient skulls are stacked in the twelfth-century St. Michael’s Chapel as a testament to the cemetery’s rich history.

The Okunoin currently serves as Japan’s largest and oldest cemetery dating back to 816 A.D., and somehow, you are introduced to the quirky, spiritual and serene environment. The cemetery is home to more than 200,000 Buddhist Monks under the leadership of their master Kukai. The entrance to the cemetery is adorned with 10,000 lanterns to provide sufficient lighting and exotic memorials including a huge coffee cup glorifying a local coffee company workforce.

Situated in Buenos Aires, this stunning cemetery has progressively grown into a city by itself and is widely known as Eva Peron’s burial ground. Since its development in 1822, the cemetery features impressive sculptures, baroque, Neo-Gothic markers, art deco and art nouveau. But the La Recoleta is best known for its deep attachment to Rufina Cambaceres. According to the town’s residents, screams could be heard days after Cambaceres’ burial. Later on, scratch marks were discernible on the coffin as proof of her failed attempt to escape.

No burial holds a special place in Americans’ hearts more than the Arlington National Cemetery. Situated in Virginia, the cemetery is the burial ground for over 400,000 U.S. veterans and their loved ones. The burial ground initially served as a village designed to assist former slaves to transform into law-abiding citizens. This stunning cemetery features immaculate lawns spanning across century-old trees, the Tomb of the Unknown Soldier and prominent Americans such as Former President John F. Kennedy, Thurgood Marshall, Medgar Evers, and Pierre L’Enfant.

Of all the cemeteries in Croatia, none holds an emotional attachment to the citizens like the Mirogoj Cemetery in Zagreb. The graveyard is nestled at the foot of the Medvednica Mountain on the estate of 19th-century linguist Ljudevit Gaj. The cemetery’s exceptional architecture is attributed to renowned Austrian architect Hermann Bolle.

When you’re planning to spend an epic Halloween party or just checking off your holiday destinations, feel free to visit the world’s most beautiful cemeteries. These locations are guaranteed to enlighten your perception and experiences regarding cemeteries through lasting friendships and networks with like-minded individuals.