The 12 Best Astronomical Observatories Around The World 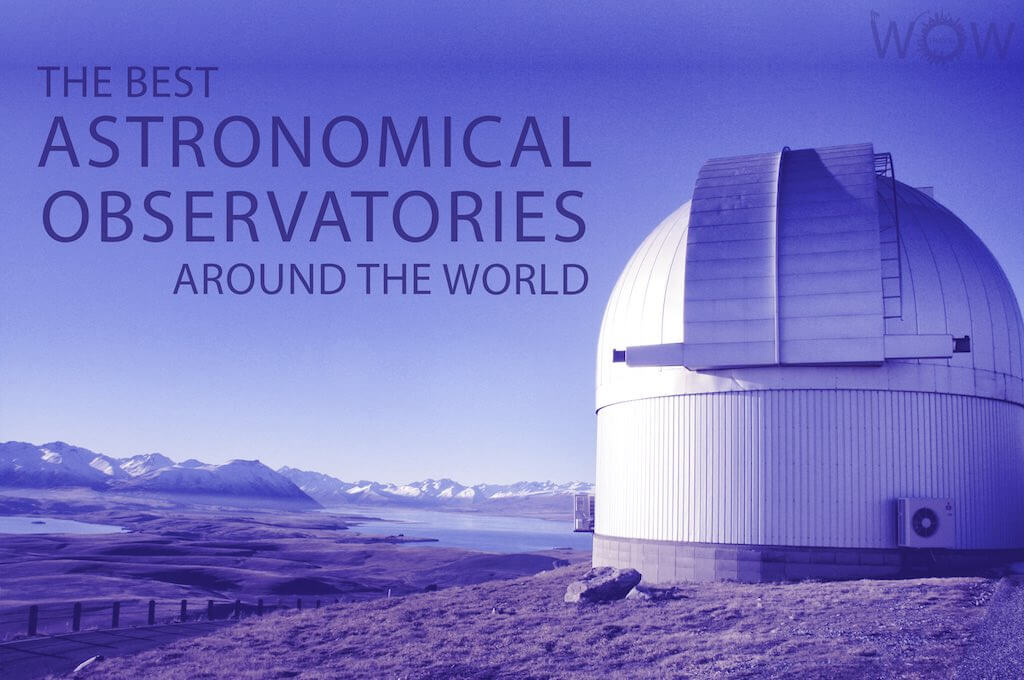 This universe is curious. The world of stars, galaxies, and cosmos has always intrigued a human being about its existence, history as well as the future. Thanks to the scientific and technical research and advancement, now a human being is easily able to gather information about the nature of the universe, the galaxies as well as the stars. There are a number of astronomical observatories around the world which let you sneak peek into the world of cosmos, as a result of which you are able to quench your thirst of curiosity! The Following are considered as the 12 best astronomical observatories around the world.

This observatory is located in Chile which is considered as a major hotspot for science. Chile already has a number of observatories and this happens to be the most popular among them. The Paranal Observatory is operated by the European Southern Observatory and is made open to the weekend visitors who come to see the Very Large telescope here. The VLT comprises of four small telescopes namely, Kueyen, Antu, Melipal and Yepun which mean Moon, Sun, Southern Cross as well as Venus. These are used in context to create an interferometer allowing the astronomers to see the details up to 25 times finer than with the individual telescopes. You can make the most of the guided tours carried on here, especially during the weekends. They don’t charge you, but a reservation is required.

La Silla is also considered to be an ESO-operated observatory which happens to be another observatory of Chile. This observatory is located at a mountaintop of La Silla, at an altitude of 8,000 feet above the level of the sea. Thus, the entire location is free of light pollution, boasting good weather at the same time. These conditions are considered to be the best conditions for stargazing. This observatory boasts a collection of various telescopes, one of the most famous among which is the High Accuracy Radial Velocity Planet Searcher which constantly remains on the hunt for the extrasolar planets. You can make the most of the free guided tours carried out here during the weekends. These tours are not offered during the months of July and August because of the possibility of snowstorms.

The South African Astronomical Observatory is considered to be home to the South African Large Telescope also known as SALT. SALT happens to be the largest optical telescope of the southern hemisphere. This telescope is so powerful in nature that it is able to detect the objects which are billion times faint to be seen or observed with naked eyes. You can take a tour of this observatory during the day or can even head back after the sunset to make the most of the beautiful sights of the night sky by the way of two dedicated visitor telescopes. Make the most of the tours organized here as you get to know more about the giant universe.

This amazing observatory is located in Spain and it is considered to be one of the most famous observatories in the world. It is situated at the best spot of Spain’s Canary Islands which fetches you all the astronomical-friendly atmospheric conditions so that you could make the most while touring this amazing observatory. More than 60 scientific institutions from 17 different countries have visited to observe at the fleet of telescopes that are stationed in this observatory. This observatory is considered to be one of the most extensive observatories of the world. It is located at an altitude of 8,000 feet above the sea level and the most sought-after telescope here is the Swedish 1-m Solar Telescope which is also considered to be the largest solar telescope of Europe.

The amazing Sydney Observatory is not only positioned to give you a clear image of the night sky but also offer you a beautiful view of the Sydney Harbor. The inside of this observatory is all about the operation of a planetarium as well as a museum that is able to house a wealth of meteorology, astronomy as well as timekeeping equipment. Once you have finished exploring and browsing this observatory during the day time, you must reserve the night time by making the most of observing one of the two telescopes of the observatory. The first one is controlled by a computer and the second telescope is an 1874 refracting telescope which is also considered to be the oldest working telescope throughout the territory of Australia. This observatory is made open from 10 am to 5 pm daily. You always get the opportunity to reserve your nighttime session in advance by the way of doing it online.

Mauna Kea is located at an altitude of 14,000 feet above the level of the sea on Hawaii’s Mauna Kea and is considered to be one of the most famous astronomical observatories of the world. There is clear sky 90 percent of the year, thereby making this volcanic mountain attractive to the astronomers. Around 11 countries have set up their shop at this observatory considering its favorable weather and sky conditions. Thus, this makes this observatory a home base for some of the biggest telescopes in the world. For all the visitors who deal with any sort of altitude sickness at the top, below the summit has an Onizuka Center for International Astronomy Visitor Information Station. You can spot many telescopes which are available for the public use which also includes a solar telescope that it fitted with protective filters to let you stare at the mighty sun. The nighttime sessions at this observatory are something that you must not miss experiencing.

South Pole Telescope or SPT of Antarctica is a telescope of a diameter of 10 meters and the same is located at the Amundsen-Scott South Pole Station in Antarctica. This telescope started all its astronomical observations at the beginning of the year 2007 and the same has been operating itself as one successful telescope of the south pole area ever since.

This observatory is located at an altitude of 6,880 feet above the level of the sea and the same is considered as the most diverse observatory, having around 22 optical telescopes as well as 2 radio telescopes. The visitors are allowed to get their hands on the three of the telescopes that this observatory has. It is open to the public during the observing programs that take place every night of the week.

Arecibo Observatory is located in Puerto Rico. It was completed in the year 1963 and until 2011 the observatory was managed by Cornell University. This observatory has a 1,000 feet radio telescope which is considered as one of the largest single-aperture telescopes of the world. The telescope is mainly known for its participation in the Search for Extra-Terrestrial Intelligence project. We recommend staying at one of the 11 Best Hotels in Puerto Rico if you plan on visiting.

Still, in the Atacama Desert, this observatory is located near the VLT and Tokyo University Observatory. This observatory holds an array of 66 12-meter as well as 7-meter diameter radio telescopes. Also known as ALMA, it is a result of a partnership between the USA, Europe, Canada, East Asia, and Chile.