13 Places You Must Visit While In Montenegro 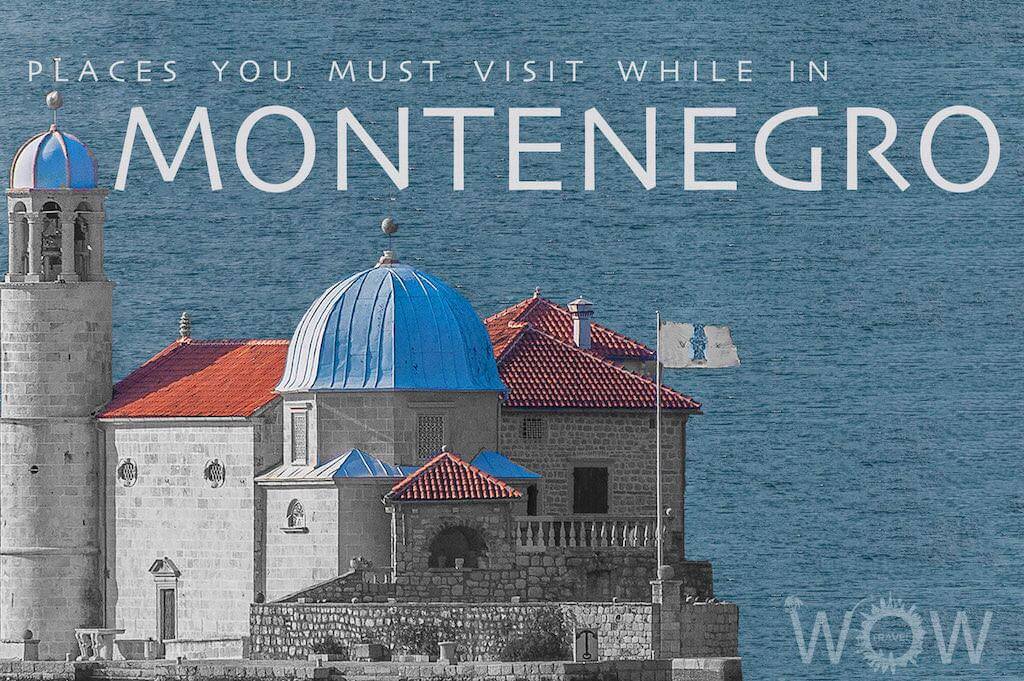 Welcome to the country of exceptional natural beauty and diversity of landscapes, rich architectural and cultural heritage, a long history and hospitable people. The picturesque country of Montenegro is a small Balkan country in southeast Europe with a beautiful coastline along the Adriatic Sea. Known as the pearl of the Mediterranean, it is a place not to misas on a trip around Europe with 117 sandy beaches, five national parks, scenic mountain ski resorts, Europe’s deepest canyon, medieval cities and so many villages and ruins to explore. Montenegro is one of the most beautiful and fascinating countries we have ever visited so it wasn’t easy to choose but we made a list of the 13 Places You Must Visit While In Montenegro.

Kotor is a magical town of Montenegro, located in the south-eastern part of the beautiful Boka-Kotor Bay which is regarded as one of the most beautiful bays in the world since 2000, and one of the most distinctive landscapes anywhere on the Mediterranean. The hills and mountains divide the bay into the Bay of Herceg Novi, the Bay of Tivat and the Bay of Risan and Kotor, connected via the straits of Kumbor and Verige, which is the narrowest part of the bay. Boka-Kotor Bay is an exceptional cultural landscape created by the harmonious symbiosis of natural phenomena and man-made heritage. Walls of the mighty Kotor stronghold, one of the miracles of the Medieval fortification architecture of the Adriatic, have been established gradually during the period from the 09th till the 19th century, and make the continual row of walls around the historical urban core and the steep slope of the Sveti Ivan hill (San Giovanni) above the town. Source: panacomp

The little town of Perast is a UNESCO protected the beautiful old stone baroque town, full of naval history, set at the foot of St. Elijah Hill 873 meter (2864 ft), within the Bay of Kotor. Affording breathtaking views over the sea and mountains, including the famous twin church islands of St. George and Our Lady of the Rock, this is a unique part of the Montenegro coast. This easternmost shore was the earliest inhabited area in the Boka. The remains of Neolithic culture (3500 BC) have been discovered in the caves of Spila above Perast and various archeological finds provide evidence of civilization dating from Illyrian, Roman and early Christian periods. Perast’s narrow streets and numerous, mostly abandoned renaissance, and baroque palaces, will leave you speechless.

The Church of Our Lady of the Rock

Our Lady of the Rocks is one of the two islets off the coast of Perast. The tiny church was raised in 1630 on this beautiful artificial island, which was built by fishermen from Perast and later converted into a Roman Catholic Church. Today, the church houses a collection of 68 paintings by the Baroque artist Tripo Kokolja.

Bar represents a modern town, a bustling seaport and major seat of Montenegro’s maritime commerce that is expanding every day. The Old Town of Bar, which is 4 km (2.5 mile) far from the coast, is the most significant among the numerous cultural-historical monuments and certainly a great place for a stroll. Over the centuries it was taken over by the Venetians, the Serbians, the Hungarians and the Ottoman Empire.

Ulcinj is the southern most major town along the Montenegrin coast before reaching the border with Albania. The people come here to enjoy the beach and enjoy the view of the Old City.

Budva is one of the most beautiful Old Towns in Montenegro coastal line. The Old Town of Budva as well represents one of the oldest settlement in Montenegro. Especially during the summer season, this area of budva is very attractive and visited. All the main beach bars, beaches, cafe bars, discos are located near it. Budva is rich in historic monuments. The Old town represents a treasure chest of culture heritage. Crossed with narrow streets and squares are famous buildings, the Church Sv. Trojica, housing the tomb of the exquisite writer Stjepan Mitrov Ljubisa, the Churches of Sv. Ivan, Sv. Bogorodica and Sv. Sava.

Sveti Stefan is a seaside resort located 5 km (3.1 mile) southeast of Budva, on the Budva Riviera. The former fishing village situated on a peninsula became a hotel-town 50 years ago, but fell into disrepair during the Yugoslavia war. Nowadays it’s Montenegro’s most luxurious boutique city hotel with 50 rustic-luxe island cottages, an elegant 8-suite villa, 3 beaches, 3 pools, a spa and myriad restaurants.

Montenegro’s Lake Skadar is a natural playground for lovers of outdoor adventure, nature and beauty. This largest of Balkan lakes offers an incredible 400 square kilometres of spectacular national park to explore, as well as being home to Montenegro’s wine country. From kayaking, hiking, wild-swimming and caving to boat cruises, culture, wine tasting and gastronomy, there is something for everyone. Source: lake-skadar

The Ostrog monastery was built in the first half of the 17th century, high against a vertical cliff of the mountain is the most visited holy place of pilgrimage in the Balkans. The Ostrog is a miracle build by nature and human interactions, carved almost in its entirety in a vertical mountain cliff. It was built by the Metropolitan Bishop of Herzegovina Vasilije, who left the monastery Tvrdos in Herzegovina because of the Turkish invasion. This UNESCO monastery is still active and with prayer music getting channelled throughout the building.

Herceg Novi is one of the youngest cities on the Adriatic, founded in 1382., as a commercial town ( salt and silk), although, according to greek sources from the 5th  century BC, there was once a settlement of Illyrian tribes. The first town at the entrance of the Boka Bay, which is one of the most beautiful bays in the world, the southernmost fjord in Europe and the deepest in the Mediterranean. It’s located on the slopes of Orjen mountain ( 1895m) which, in winter, is covered with snow and offers the possibility of practicing winter sports, being at the same time climate and hunting oasis. Source: hercegnovi.me

Located at the foot of Lovcen mountain, Cetinje is a town of immense historical heritage, founded in the 15th century. It became the center of Montenegrin life and a religious center because of its heritage as a long-term Montenegrin capital that it is today the honorary capital of Montenegro. Make sure to visit the Monasteries of Cetinje, it holds such spiritual treasures as the particles of The Holy Cross, the right hand of John the Baptist and the Filerma icon of the Mother of God.

Formed by glaciers, high in the mountains, Durmitor National Park is one of the most stunning natural reserves in Europe. In the northwest of Montenegro, Durmitor dominates the landscape. It covers more than 32,000 hectares and the striking environment within it is unavoidable. The canyon is the deepest in Europe and it cradles the wild Tara River, with its alternating clear blue waters and thrashing white waters for rafting. There are three major features to Durmitor – canyons, plateaux and mountains. Within these formations, it has a mix of both Mediterranean and alpine microclimates, which gives it a unique range of flora and fauna for this part of the world. Living in the wilds of the park are animals like brown bears, wolves, wild cats, eagles and owls. The town of Zabljak, relaxed and rambling, is the center of tourist activities in Durmitor National Park. It’s an alpine center – designed primarily for skiing in winter time but adaptable for summer activities like hiking, climbing, rafting and bird watching. One of the most popular parts of the park near Zabljak is Crno Lake (or Black Lake in English). It is the best known of the 18 glacial lakes and is an easy walk from town. Source: timetravelturtle.com

Biogradska Gora National Park is the oldest of Montenegro’s national parks, situated in the north-eastern part of Montenegro. This area in north-east Montenegro has been protected since It was founded in 1878 by King Nikola and became a national park in 1952. Within it lies 1600 hectares of virgin forest and some trees here are 500 years old.