The 10 Most Beautiful Places In Albania 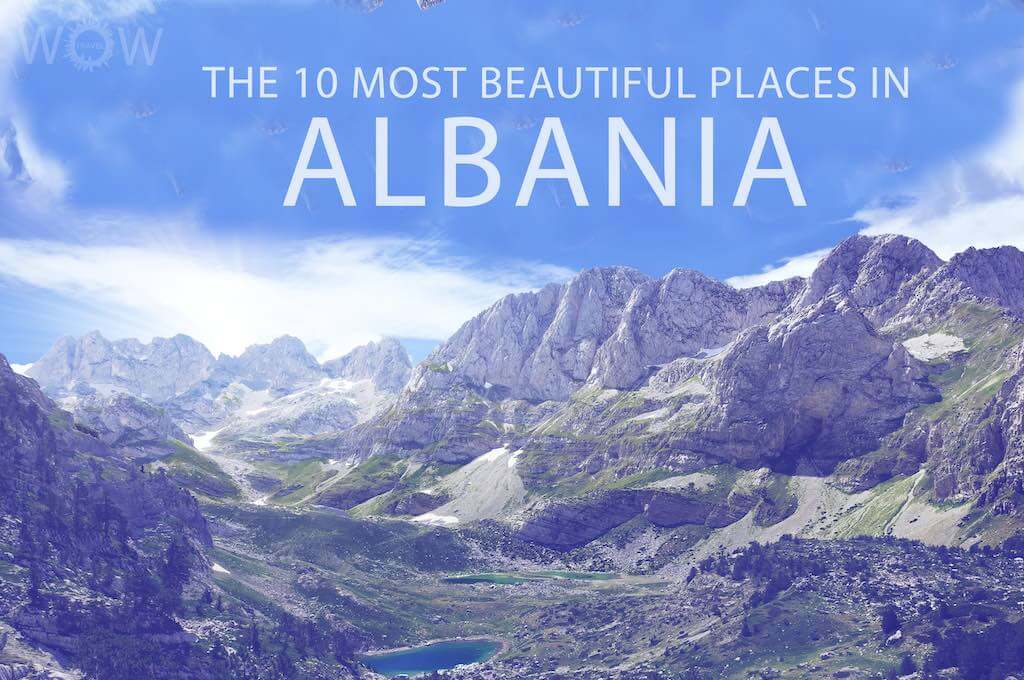 From sun-kissed stretches of white sand to majestic mountains, Albania has it all. Its beaches on the Adriatic and Ionian coastlines are some of the most amazing places in Albania. They’re arguably just as gorgeous as those in neighboring Montenegro and Greece, but nowhere near as crowded. And it is in this lack of unfettered mass-tourism that a good part of Albania’s appeal lies. Trust us, you must visit Albania. Imagine strolling along the cobbled streets of historic cities and towns unspoiled by garish malls and fast-food chains. Or perhaps venture into the deep valleys or high in the mountains where the only sounds are natural, not man-made. Ready to take an unforgettable 8-day tour of enigmatic UNESCO heritage sites, feast on delicious Albanian food, and set foot in breathtaking places of natural beauty? Then read on for the 10 most beautiful places in Albania. Let’s visit Albania!

Surrounded by hills and mountains and with the Osum River running through it, the city of Berat is a picturesque sight. It’s called “The Town of a Thousand Windows” because of the hillside houses sitting side by side overlooking the city. History and architecture enthusiasts will find much to appreciate in this UNESCO World Heritage Site. For instance, in the Mangalem quarter is the 16th-century Sultan’s Mosque, one of Albania’s oldest mosques. Also notable is the Gorica Bridge, which is among the country’s oldest and most famous Ottoman bridges. The Citadel of Berat, also called Berat Castle, is another must-see. It dates mostly back to the 13th century and contains Ottoman mosques and Byzantine churches. For the most convenient of sightseeing excursions, book a full-day Berat trip from Tirana. This way, you’ll maximize your time in this beautiful city and not have to worry about transportation or finding your way around.

Crystal-clear waters in stunning shades of blue and green make Blue Eye spring (Syri i Kaltër) one of the 10 most beautiful places in Albania. Bubbles break on the surface from deep below, but exactly how deep it goes, no one knows for sure. What’s certain is that the deepest that divers have reached is 50 meters. You might be tempted to find out for yourself, or at least to take a dip in the spring’s mesmerizing water. However, keep in mind that swimming isn’t really permitted here. Instead, you can enjoy the karst hole’s beauty from a small viewing platform above it. Also, feel free to wander under the oak and sycamore trees around Blue Eye, an area designated as a Nature Monument. It’s close to Muzinë village in Theth in southern Albania, roughly 13 km from the summer town of Sarandë. To make the most of your time in Theth, embark on a full-day tour. Led by a local guide, you’ll get to see the area’s other famous sights, such as Grunas Canyon and the Locked-In Tower.

Home to the 8,000-hectare Valbona Valley National Park, this region in the Tropoja district is surely among the most amazing places in Albania. Flanked by the majestic peaks of the Dinaric Alps, the valley is a mountainous paradise carpeted by wildflowers and teeming with forests of pine, oak, and beech. The beautiful Valbona River stretches roughly 50 km along the valley and is a wonderful spot for fishing, swimming, and kayaking. The hamlets and villages here offer their own attractions and brand of Albanian hospitality. Drop by the Maskollata area in Valbona village for a quick bite or look for abandoned houses in Gjelaj, a village in the Rrogam area. And if long hikes in natural beauty sound appealing, a trek of Albania’s hidden trails is a must. You’ll take the roads less traveled through stunning alpine pastures, centuries-old bazaars, and ancient churches and mosques.

If you’re looking for stunning beaches, then you’ll find Ksamil a worthy reason to visit Albania. Part of the Albanian Riviera in the southern region of the country, it’s a popular summer destination. But don’t worry if you’re looking for a quiet stretch of sand. Since Ksamil has dozens of tiny coves, you’re apt to find a secluded spot where you can bask under the sun in peace. Or, make your way to any of the three tiny islands in the bay. It’s always less busy here compared to the town beach. And after you’ve had your fill of powdery white sand and the Ionian Sea’s turquoise water, you might want to head to a cozy restaurant in Ksamil village for some tasty Albanian cuisine.

Nestled in a valley between the Drino River and Gjerë Mountain, this ancient city is an amazing place to visit in Albania. Dating from the mid-14th century, it formed part of the Byzantine Empire. The hilltop Old Town section is a UNESCO World Heritage Site where Ottoman architecture shines. A walk along the steep, cobbled streets will lead you to the Gjirokastër Castle (or Gjirokastër Fortress), which also houses the Armaments Museum. Plus, you won’t miss seeing distinctive old houses with stone roofs—the source of Gjirokastër’s nickname “City of Stone.” More than 500 homes are designated as cultural monuments here. The beautiful Zekate House and Skënduli House are two notable examples; both are now museums. Want to skip the ticket lines to the castle? With a Gjirokastra Full-Day Tour, you’ll get to do not only that but also to sample traditional stone-ground coffee and mountain tea.

According to legend, Roman soldiers visited the small peninsula of Lin thousands of years ago and named it Lyhnidas—the Lake of Light. It’s still among the most beautiful places in the country and is a fantastic reason to visit Albania. Today, this part of the municipality of Pogradec is occupied by a charming fishing village where red-roofed houses sit side by side. During summer, visitors can walk along the grapevine-strewn alleys towards Lin’s beaches and the clear waters of Lake Ohrid. You can also pack a picnic basket, head to the Old Mill area, and relax amidst leafy trees and bubbling fountains. And if you’d like to see a historical site, make your way to the Rrënojat e Kishës Paleokristian (Paleochristian Church). The ruins of this church are most noteworthy for colorful mosaics, which go way back to the 5th–6th centuries.

A majestic mountain range running along the borders of Albania and North Macedonia, it is part of the European Green Belt. It’s where you’ll find the eponymous Mount Korab, one of the highest in the Balkan Peninsula. The mountain is a mecca of sorts for adventure-seekers since it offers plenty of beautiful opportunities for hiking, mountaineering, and skiing. Mount Korab lies within the Korab-Koritnik Nature Park, where glacial lakes, dense forests, awe-inspiring canyons and caves, and lush valleys fill 55,550 hectares. Griffon vultures, roe deer, and grey wolves are just some of the wild animals that roam the park’s vastness.

Tucked in Albania’s southeastern region, the city of Korçë (also called Korça) enjoys quite a few nicknames. For example, it’s been referred to as “Albania’s Little Paris” because of its grand, French-style villas and coffee culture. Korçë also enjoys the moniker “City of Museums,” being home to institutions such as the National Museum of Medieval Art, the National Museum of Archaeology, and the Bratko Museum. The Cathedral of the Resurrection, Albania’s largest Orthodox church, is another of the city’s many attractions that make it one of the most amazing reasons to visit Albania. And if you build up a thirst after visiting the city’s major destinations, slake your thirst with a pint of Birra Korça, reputedly the Balkan Peninsula’s best beer. Looking for a place to stay? The luxurious Villa Ester is a popular choice among those who visit Albania. It’s near the city center and has all the comforts of home.

Spanning an area of 34 square kilometers, Lake Koman is a picturesque way to travel between the towns of Koman and Fierza in northern Albania. The lake is actually a reservoir whose water comes from three rivers: the Drin, Shala, and Valbona. Going on a ferry ride here is to experience what’s been called one of the world’s most beautiful boat trips. Several local companies operate ferry services with boats of different sizes. The roughly 2-hour trip treats both local and foreign travelers to amazing sights that seem straight out of a travel magazine. Boats glide on calm blue water surrounded by tree-covered hills and steep cliffs, vistas that make it truly worthwhile to visit Albania. Here and there, you’re apt to see plenty of birdlife including grey herons and black-headed gulls. If you’d like to explore the lake further, you can sign up with local companies that offer kayak tours.

Just 20 km north of the capital city Tirana, this medieval town is a fantastic reason to visit Albania. Sitting between the Ishëm River and Mount Krujë, it boasts a rich and colorful history. In its earliest days, it served as a site for pagan rituals, was the home of the ancient Ilyrian tribe, and designated the first independent Albanian state. Today, many parts of Krujë stand testament to its storied past. For example, beautiful Ottoman-style buildings in the old town center form the spirited bazaar. Shopping for pretty, hand-made souvenirs here is quite the experience. Another must-see is the ancient Krujë Castle. Built in the 5th or 6th century, it served as the headquarters of the Albanian hero Gjergj Kastrioti. The museum inside the castle commemorates Kastrioti, the “Dragon of Albania.”