Top 8 Things To Do In Tirana 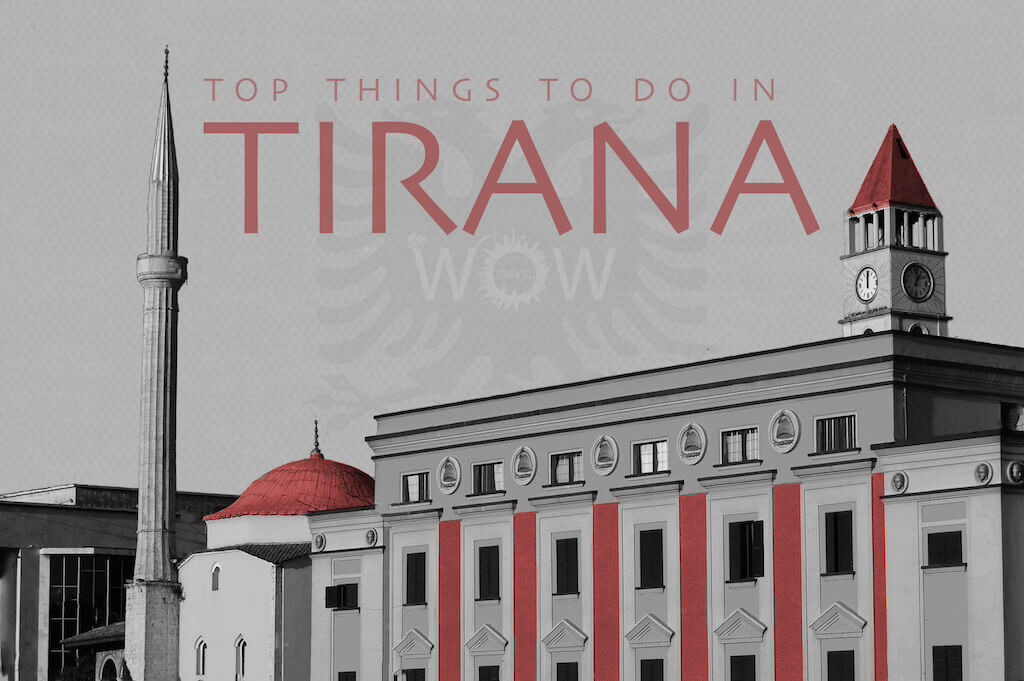 It was founded in the early 17th century and despite Albania’s efforts to appeal to more foreign visitors, Tirana, both the largest city in and the capital of Albania, is not a well-known destination. Tirana boasts a heritage dating back to the Ottoman Empire and is surrounded by lush green hills and has colorful streets filled with many restaurants, clubs, historical sites and outdoor activities. Check out our Top 8 Things To Do In Tirana.

In the heart of Tirana, Skanderbeg Square is a lively meeting place, surrounded by some of the most important tourist attractions of the city. Proudly boasts a statue of Albania’s famous son Georg Kastriot Skandebeg. All important departments and sights can be found nearby: the Et’hem Bey mosque & the clock tower, the Skanderbeg Monument, the national museum and the palace of culture.

The Et’hem Bey Mosque is located in the center of the Albanian capital Tirana. Construction was started in 1789 by Molla Bey and it was finished in 1823 by his son Ethem Pasha (Haxhi Ethem Bey), great-grandson of Sulejman Pasha. During the totalitarianism of the Socialist People’s Republic of Albania, the mosque was closed. In January 18, 1991, despite opposition from communist authorities, 10,000 people entered carrying flags. This was at the onset of the fall of communism in Albania. The frescoes of the mosque depict trees, waterfalls and bridges; still life paintings are a rarity in Islamic art. Source: beautifulmosque

The Blloku, or Block area, has become Tiranë’s hippest and most vibrant district. Filled with boutiques, shops, cafes, restaurants, trendy bars, and nightclubs, it is the place to see and be seen in this swiftly changing and growing cosmopolitan city.

The Pyramid of Tirana

The out-of-place pyramid, was built during communism times as a museum to honor a reviled communist dictator, Enver Hoxha. a former Albanian leader who furthered the ideals of Stalinism for decades after the Russian dictator died. The cement is crumbling, windows are smashed and its walls are full of ugly graffiti. But the Pyramid of Tirana, located at the center of Albania’s capital city, has an emotional and political resonance that makes it difficult to destroy.

This urban park is a great place to relax for an afternoon and makes an ideal spot whether traveling with children or adults. Its many paths and natural scenery in the middle of town make it a nice escape from the bustle of the city. There are many restaurants scattered through the park as well as vendors selling all different kinds of items. It is indeed one of the most beautiful places in Albania. Source: world66

This day trip is for active people who enjoy hiking to the top and receive stunning views in return. although you can also get there either by taking the Dajti Ekspres cable car, or by driving up to the national park. The fauna here is abundant in varieties and impressive features. The park is the most important zone for such big mammals as wild pig, wolf, fox, rabbit, brown bear, wild cat etc.

This Panoramic Bar & Restaurant is one of the best in the city and in addition to the delicious cuisine it offers the best views of Tirana by day and night 360 degrees. Sky Club is open every day from 7 am to 24 pm and is on the top floor of Sky Tower.

Take a day trip to port city  Durrës, the second largest city in Albania, and one of the most ancient cities in Albania. It was established in the 7th century B.C. Durrës is a wonderful walking, sight-seeing, and beach location, easily accessible from Tirana by train or car (about 50 km from Tirana). Make sure to visit the Byzantine wall, the Byzantine Forum, the Basilica of Arapaj VI, the Amphitheater, the Venice Tower, the tower of Karl Topia and the Turkish Wall.